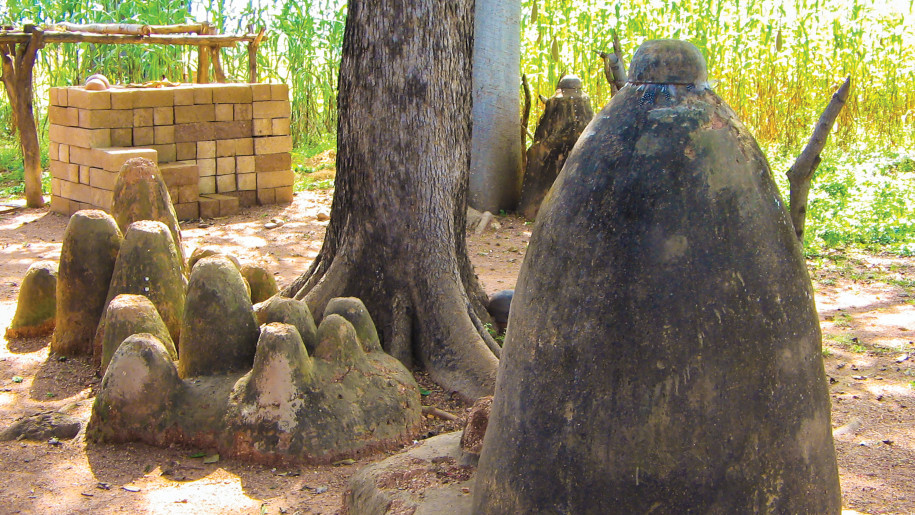 Seraphine is a very joyful person. When I come to her spot in the market where she sells tomatoes, she loads my backpack with three times the amount I ask for. She always seems to be happy and laughing. I know her joy comes from having Jesus in her heart, because everything else in her life is difficulties and sorrows.

Seraphine first started visiting various churches when she was sick, and nothing seemed to help her recover. So she thought she might try the Christian God. After all, many of these churches claimed to provide healing through prayer. Her husband, who is the keeper of a fetish, didn’t mind. He just wanted her to be healed. But she still didn’t get well, so her husband sent her back to her parents who live in the village of Kouaba. Maybe there were spiritual issues from her past or her family’s past that needed attention before she could get well.

In Kouaba, Seraphine received a visit from Jean, our local coworker, and his wife. They prayed with her and invited her to the little Adventist church group. She started attending and enjoyed it. In addition to praying for her healing, the members focused on introducing her to Jesus. Seraphine wanted to learn more, so she started to read a Ditammari Bible. Eventually, she was baptized and immediately got involved, participating in all the programs. Soon she was a pillar of the church, leading night meetings when Jean was visiting other villages. Miraculously, her sickness disappeared. When her husband heard that she had gotten serious about God and was still going to church even after being healed, he told her that he didn’t want her to come back. He didn’t want their children to be infected by this virus. Later she learned that he had taken another wife.

So Seraphine stayed in Kouaba in the house of her father. But when she was told that a sacrifice was to be performed in her name, and she refused, problems started there as well. She was told that she, the only daughter of the family, was not to go to church. Her place was with the spirits of the ancestors. Recently, her brothers started to menace her and told her that if she wasn’t willing to give up church and God, she would be kicked out and would have to find a place of her own.

Seraphine’s faith is strong, and she is determined to follow Jesus. But Satan’s traps are often subtle. Just about the time her family told her to leave, her husband sent word that he wanted her back. He said that he had sent the other woman away and that he would start going to church with her. What should Seraphine do? Was he serious? If so, why didn’t he start going to church on his own? There is an Adventist group in his village, and he knows the leaders, so why was he waiting for her before going there?

At this point, Seraphine is still in Kouaba. But this was certainly not the only attempt of Satan to trick her. Please pray that she will always be able to discern Satan’s pitfalls and will have the strength to remain faithful no matter what.