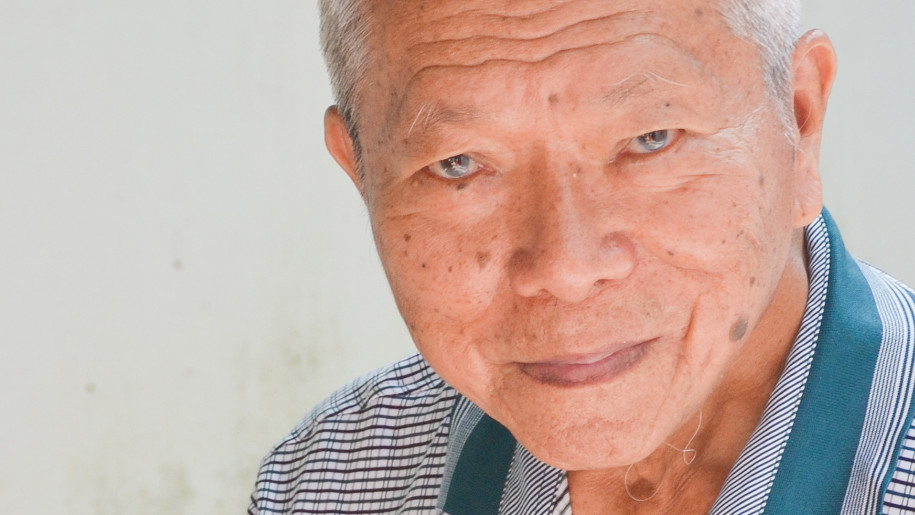 You never know what a simple invitation to church might produce!

Last year, we wrote about Daniel’s experience growing sunflowers. Seedlings he carefully tended were devoured by some animal, but extra seeds he had tossed over the fence produced sturdy, productive plants. Imagine his delight, then, when Daniëlle K.’s mother came to visit from Holland and brought him several varieties of sunflower seeds. Daniel immediately went to work, planting them and taking the necessary precautions to protect them from danger. He even put some of the seedlings in a homemade tray on his desk where he could watch them until they were ready to be transplanted. All of the varieties grew, but one in particular took root especially vigorously and flourished.

Seeds have been taking root in our little church as well. Last year, Lung Cheun invited a Swedish man named Maatz to church. Lung Cheun is the oldest member of our church—87 years old, to be exact. When he was a young boy, war in his native China prompted his parents to send him with an Aunt to live in Thailand. He went to school and eventually began working in a city where there was an Adventist church. “I always believed there had to be a reason and a cause for this earth,” he said, as he told me the story of how he got baptized after attending evangelistic meetings in Ubon. Lung Cheun lived in Chiangmai for a while where he was blessed to fellowship with missionaries who took an interest in him and helped him learn English. Then, more than 50 years ago, he moved to Khon Kaen to start a business.

For half a century, Lung Cheun dreamed of the day when there would be a Seventh-day Adventist church here in Khon Kaen. While he waited, he attended the Chinese Christian Church, got married and had two sons. His wife passed away two years ago, and he now lives with one of his sons. He often bikes to the music school and reads his Bible and other literature under the shade of the mango tree. This past year, he finished reading Ministry of Healing. He comes to the music school early on Sabbath mornings and often helps set up for church.

Lung Chuen still attends the Chinese Christian Church on Sundays, and that is where he met Maatz and invited him to church. Maatz accepted the invitation and began attending our Sabbath worship group. He shared how God’s grace had reached him later in life when no one, including himself, thought that this would be possible. Maatz began to pray that his Thai girlfriend Nok would become a Christian, and just a few hours later, she told him she wanted to attend our church with him on Sabbath! He was amazed and happily brought her. Nok loved the community she found in our worship group, and she changed her work schedule so she could attend every Sabbath. She and Maatz began Bible studies with our team.

Nok is experiencing God’s transformational power firsthand. After the New Year’s celebrations, she shared her observation that many people go to the temple and perform religious acts, but then they go out afterwards to party. She said that, as she has gotten to know God, she has realized the seriousness of sin, and she doesn’t want that kind of life. In church, Nok shared a testimony and said, “I want to get baptized. I want to be with God all the time.” Nok and Maatz are planning their wedding now, where they will receive God’s blessing as husband and wife. We are excited that this wedding will be a first-time experience in Christian community for the majority of the people coming.

Thank you, Lung Chuen, for your faithfulness all these years. Thank you for knowing that you are never too old to plant a seed and to invite someone to meet God.