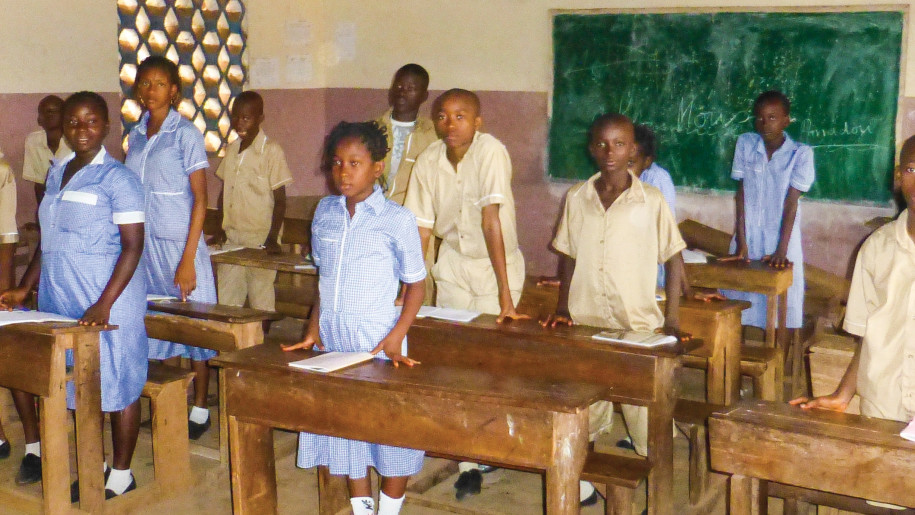 On Thursday, January 15, 2015, radio broadcasts all over Guinea announced that schools would reopen on Monday the nineteenth. Guineans everywhere received the news with excitement, fear and even indignation.

In 2014, a deadly Ebola epidemic swept over Guinea and surrounding countries. Guinea reported 2,917 cases of the virus resulting in 1,906 deaths. Schools were closed, and public gatherings were prohibited to minimize contagion. Now, in January, the fight against the dreadful virus was still going on. Though the government seemed to be gaining victory, there were still sporadic cases of Ebola. People argued that the government should gain complete victory over Ebola before reopening schools. Others were indignant about receiving only four days’ notice to prepare for school. Many school teachers and administrators had thought there would be no school at all this year, so they had done no preparation. The Guinean school year usually runs from October through July. This year, it started in January and will end in August. Instead of the normal three months of holidays, there will be one month of holiday in September.

As Guinean schools reopened, kits containing non-contact thermometers, buckets and soap were distributed to every school. Regular hand washing with bleach water and use of hand sanitizers greatly reduces the spread of the Ebola virus. Medical personnel fanned out all over the country to teach educators how to use the kits and respond to suspected Ebola cases in their schools.

On the first day of school, the local education department and some provincial education officers divided themselves into teams and went out to inspect private and public schools. At both campuses of our mission school, everything was in place according to instructions. At each school entrance we have a 60-liter container full of bleach water. Two guards with non-contact thermometers check for fevers and instruct students and parents to wash their hands before proceeding to the classrooms. At the entrance of each building, we have more containers of bleach water where students and teachers wash their hands before entering and leaving each class. We also showed the inspectors the special protective-clothing kits AFM had sent us, something no other school in Fria has. At the end of the day, the inspection team was very pleased with our preparation.

During our first week of school, everyone followed the simple procedures, and everything went well. Our students, parents and teachers were happy, and our studies were moving forward. Then, on Monday, January 26, parents of school children in Fria went on an angry rampage, storming schools all over the city, desperate to take their children out of classes. A rumor was spreading like wildfire that the Guinean government was vaccinating students without parental consent. Furthermore, it was rumored that the vaccine was really live Ebola, designed to infect the children and perpetuate the epidemic so money would keep flowing in from international aid organizations. The term coined for this was “Ebola Business.”

Panic gripped our entire city, and parents closed their shops, dropped everything, and raced to their children’s schools. As I drove to the local department of education to try to get an official statement, the streets of Fria were jammed with parents and pupils. Angry parents were railing against the government. A friend of mine at the local department of education told me that other towns in our area were experiencing similar panics because of the rumor.

The prefect and the mayor of Fria broadcast a statement on the radio saying that the rumor was entirely false. The mayor said that there were indeed vaccinations for Ebola in Liberia, but not in Guinea. The radio station spent the rest of the day trying to calm people down and reassure them.

Even now, several months later, many parents are still keeping their children out of school, despite tireless efforts to dispel the rumor.

Guinea is now engaged in a 60-day campaign to completely eradicate Ebola. Please pray with us that God will bless this effort and make it a success so that people can freely move about, and life can return to normal.

The content here about the re-opening of the school was good, I got to know a lot of informative content. I am for sure posting a review about it on *****ignment Man, it deserves to be read. People will really like the content here.

Why did these rumors were allowed to fly in this school? I need to know this so that I can tell the students about fake bachelor degree when they are done dealing with these rumors. That would be great for every party involved.