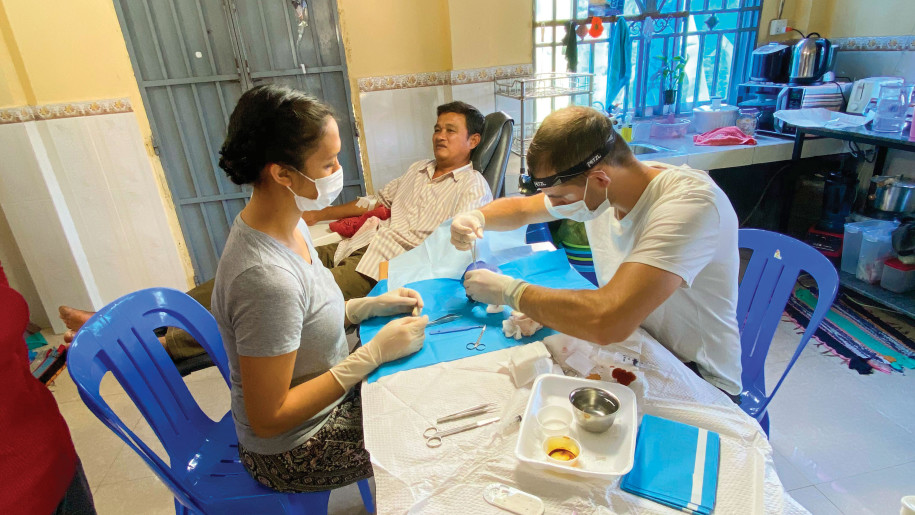 Actually, we don’t have to amputate!” I knew Pou Koi was relieved to hear me say that. He was reclined on a fold-up dentist chair in the middle of my kitchen. A bright, makeshift light was hanging from our ceiling fan. Sterile drapes and medical utensils were spread out on my kitchen table. Ryan, our student missionary who is also a nurse, sat on the opposite side of the table, and our patient’s hand was between us. We were doing a mini operation on the tip of his ring finger to remove dead, rotting skin caused by an infection of aeromonas hydrophila, a bacteria found in fish and dirty water.

Originally, we had thought the fingertip was too far gone to save, and we were prepared to amputate down to the first knuckle. However, after cleaning up the wound and consulting an ER doctor friend of mine in the States, we decided it was salvageable. After sewing up and bandaging Pou Koi’s finger, we sent him home with more antibiotics, pain medication and lots of instructions. He and his wife glowed with thankfulness. After many weeks of sleepless nights, plagued by severe pain in his finger that traveled up his arm, Pou Koi had been desperate. “I was about to cut it off myself!” he said. After surgery, he was practically jumping for joy. We followed up with him at his home to change his dressings, and he has been coming to church for the past few weeks. He and his wife continually thank God for helping them, putting their hands up in the air and praising Him whenever the topic comes up. For them, this was a life-changing operation. Pou Koi’s wound is now looking great, and once he is fully healed, he will be able to once again work to provide for his family. His wife has been carrying that burden for all this time.

Whenever I visit with Pou Koi and his wife, their joy is infectious, and I can’t help but feel it, too. We hope that fixing his finger was just the first healing he will experience, and that soon he will experience the transforming, heart-healing power of Jesus Christ. To this point, they have only known God as revealed in the Qur’an, but we pray that as their love and gratefulness to God increase, they will see the love of God in Jesus Christ.