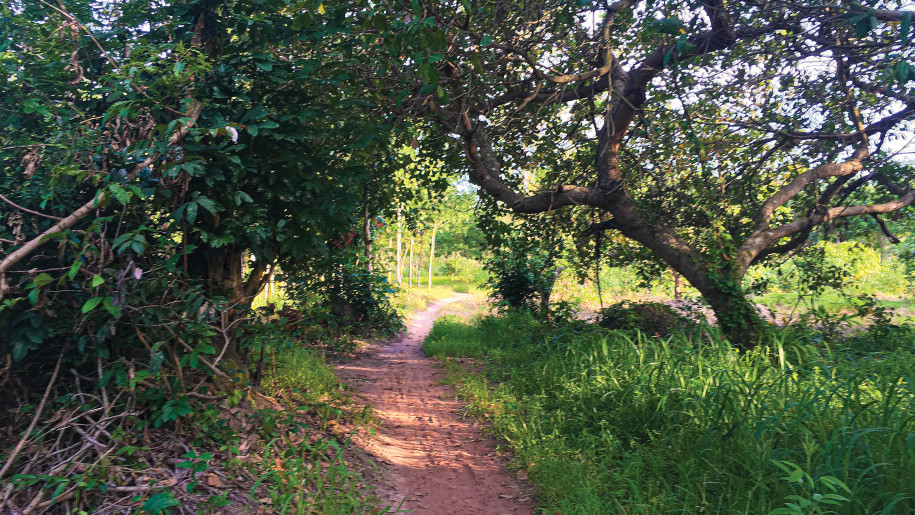 In ancient times, missionaries had to journey for months, even years, to reach their posts. Today, thanks to modern city traffic, it takes much longer. If all our time sitting in traffic could be turned to forward motion, I estimate that our car would take us around the earth three times.

I’ve seen people abandon their cars and go back to get them again once traffic started moving. I’ve seen people dragging their luggage between the lanes trying to get to the airport. Once I saw two trucks enter a one-lane bridge at the same time, and neither would give way. High beams flashed, horns screamed, engines roared, and smash! The guy in the smaller truck was not okay. Another time, an overloaded brick truck tipped over right in front of us, blocking all lanes.

Speaking theoretically, of course, when a missionary is making a supply run to town in his short-bed pickup truck, a two-piece L-shaped couch, a king-sized bed, a washing machine and wood for a deck might all catch his fancy. Some people might worry about losing something important in this scenario, such as a limb, but really that’s just silly. For one thing, the field of prosthetics is making amazing progress. What’s more, personal experience is a great teacher. When I was a kid and we used a pickup truck to make deliveries for my dad’s furniture factory, I would sit on top of the load making sure it all stayed together. I know the arcane secrets of sticking everything in just the right place so it doesn’t fall off. It’s a gift, really. My motto is that, in any scenario, the ideal number of trips between Phnom Penh and the village is exactly one. My point is that you should not worry about me, unless you want to send me tie-downs. One or two should be enough; I have my own kid now.

Another reality of modern missionary travel is the beer-powered money-collection points. Police here don’t have cars to chase you down, so they just stand by the road, beverage in hand, stopping everyone. They don’t have paper for tickets either, so they just take your money, which is nice since the matter gets settled right there, and no points ever go on your record.

The worst police “fundraising” is in Phnom Penh. There are police and army officers stationed roughly every 14 feet throughout the city. I’m pretty sure there was once one in my hotel-room closet. This situation is more problematic, because they’ll pull you over for infractions like having a green light turn yellow as you cross an intersection, or for having white skin. By the time we finish a day of errands, fighting traffic and being stopped several times by authorities, I usually have developed a near-fatal case of the medical condition known technically as “Hammering Heart.”

On the other hand, the Cambodian civilians you’ll meet are wonderful hosts, unfailingly friendly and helpful. When you visit, you will need a lot of help, since most of the writing is in Khmer, which is basically a secret code designed to bewilder newcomers. In English you can form the letters YMCA with two arms. But in Khmer, you would need to be an octopus. That’s because Khmer has the most letters of any phonetic language on earth—33 consonants, 23 vowels and 12 independent vowels. And the vowels have two or three sounds each depending on what class of consonant they are paired with. And since all that wasn’t hard enough, they decided to have no spaces between words.

Did I mention that the cheapest hotels still provide a toothbrush tied to the sink? Nicer hotels have Western-style bathrooms. This is a luxury in Cambodia. Though this great civilization built Angkor Wat, the largest temple complex in the world, which is visible from space, and sews 6 billion dollars of clothing exports every year, apparently it has not had time to get around to plumbing. You have to carry your own toilet paper, because bathrooms here don’t have any. Ideally, you would also carry your own toilet, because many bathrooms don’t really have those either. What they have is basically a miniature bathtub in the floor with the aroma wafting up like fog. That is all I am going to say on that subject.

Except that if you come to Cambodia without any previous squat-toilet experience, you had better learn fast, preferably before a long drive. Once we had friends come on a mission trip. Stop after stop, their nine-year-old daughter went into the bathroom, looked around and came back out. She appeared very uncomfortable but said she would hold it until there was a real bathroom. Stephanie finally rescued her by providing a demonstration.

Actually, just having numerous gas stations with some sort of bathroom facilities is an infinite improvement over 20 years ago. Roads are actually paved now (or ready to be repaved due to overloaded trucks). I remember watching the dust swirl in through the rusted floors of truck taxis and praying for a rest stop. The women sat in the front of the truck and the men in the back. At rural bathroom stops, no one dared set foot off of the road because the fields were still dotted with landmines. There is actually an Adventist school in another part of the country that is currently waiting for their land to be de-mined before they can get a permit to build.

In the first four months of 2019 there were 47 landmine deaths and 39 non-fatal injuries reported. Cambodia Mine Action Authority reported landmine explosions killed 19,776 people and injured or amputated 45,049 others from 1979 to April 2019. Cambodia also hit a milestone in 2016 when deaths and injuries from mines and unexploded ordinance for the year fell below 100 for the first time since 1979 when records began. According to a recent UN report, more than half the countries’ mine fields have yet to be cleared.

In May 2018, an anti-tank mine exploded in Phnom Penh, struck by a bulldozer. The operator was thrown over a wall and hospitalized with severe injuries. I once heard a landmine go off in the distance when a cow stepped on it. The whole village had beef that night. Many years ago, before my sisters and I fully grasped the tragedy of landmines, we were doing charades for my mom. After acting out a few animals, we all stood on one foot, holding the other foot behind us with our hands. “Flamingos?” Mom guessed.

“Wrong!” we chorused. “We’re Cambodians!” At that time, there were three hospitals around the country dedicated exclusively to treating landmine victims, and they were overflowing. It’s only marginally better today with one doctor for every 5,000 people. Thirty-two percent of children under age five are malnourished, and their growth is stunted.

Please pray for these precious people as we work to bring them hope and encouragement.