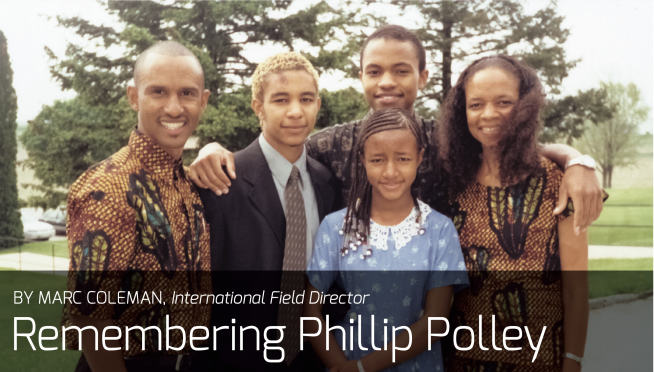 As many of you reading this column know, it takes a determined faith to fight through a protracted sickness. Phillip Polley, former AFM missionary, was diagnosed about six months ago with a rare and aggressive form of cancer. Early on Sunday morning April 29, Phillip passed. Another pioneer missionary has gone to his rest awaiting the second coming of Christ.

Phil and I first met when I was pastoring in rural Pennsylvania, and he and his family spoke to our congregation about their call to plant churches in faraway Mali, West Africa. He was an engaging speaker, and his warm, easy smile and relaxed air put people at ease. The seeds the Polley family planted in our hearts remained long after they had gone. They were a family at peace and determined to answer the call God had on their lives. That was 23 years ago. Little did my family and I know that we would also become pioneer missionaries in Africa in the neighboring country of Guinea.

During the Thanksgiving Holiday one year in Guinea, we made the 18-hour drive to go up and visit Phil and his family. It was good to compare notes, fellowship and just learn from colleague pioneer missionaries. During that visit, Phil said something to me that I never forgot. “You know, Marc, if it’s God’s will, I could stay here in Mali forever.” He had found his calling, and God was blessing His family. He knew that this was what God wanted him to do, and he was determined to do it. He had learned the language quickly and had many friends who affectionately referred to him as Segou.

Eventually, when the Polleys did return to the States, Phil looked for a post of service that felt as significant as their church-planting work in that unreached corner of West Africa. He served in AFM’s development department as a fundraiser. After that, he served in development at Southwestern Adventist University. Next, he became executive director of two branches of the Red Cross in Texas. But it all came together for him in 2017 when he found what he called his “dream job.” He was named the Director of Development for the Adventist Development and Relief Agency (ADRA). It was the best of both worlds for him, combining missions and the development work he loved so much.

The obituary at his funeral said the following: “Phillip believed in and upheld the importance of two things—his faith and his family. He was bold in his faith, not ashamed to share the gospel with those he came in contact with. In fact, Phillip never met a stranger. He would often sit beside someone on the airplane and have their whole life story by the end of the flight and would have provided them with literature or a sermonette.”

It was this determination to share Jesus that God used to plant the church in southern Mali. It was Phil’s determined faith that gave him the strength to hang on to God relentlessly through the suffering of his illness. At one point, though it looked like he was beating the cancer, Phil confided to a friend that God had impressed him to get his house in order. When another friend told Phil that they were praying for his complete healing, Phil’s response was firm and determined. Yes, he would accept God’s healing—now or at the resurrection—but he knew that God would give it.

When I get to heaven and begin reconnecting with friends and loved ones, I’ll look for the people from Mali. I’m sure Phil will be there with them. That will probably be the best way to find him. Until then, the rest of us will work on with determined faith by the grace of God. It can’t be too much longer now. Rest, dear missionary colleague. We’ll meet you on the other side.