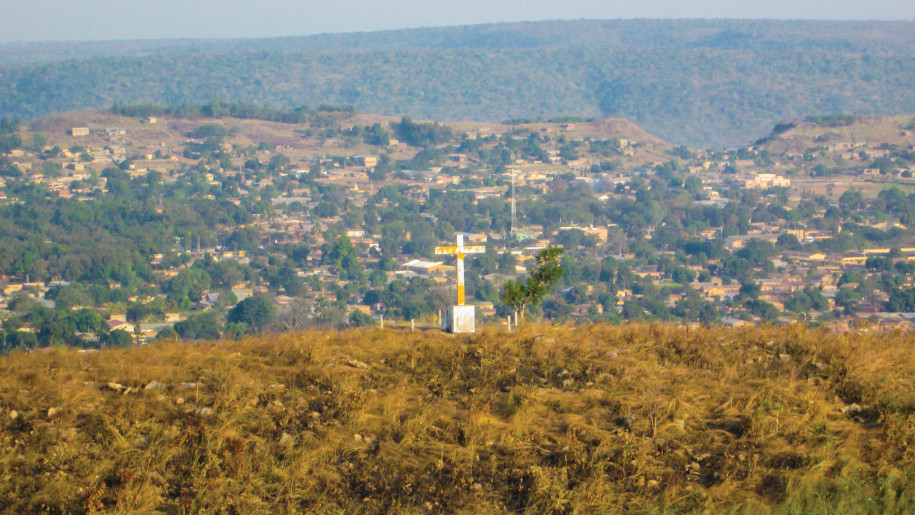 Every four years, initiation ceremonies for teenage boys and girls take place in the Otammari culture. These ceremonies are considered very important and are mandatory for every qualifying young person. You can miss all kinds of other ceremonies and sacrifices during your lifetime, but not this one. Families that have moved away from Otammari territory will send their children back for the rituals, even from outside of the country. Even parents who could be considered rather secular make sure their sons and daughters participate in at least the most crucial parts of these ceremonies. So do many Christians. Usually the participants are anywhere from 14 to 18 years old. But if for some reason you missed the ceremonies when it should have been your turn, you will be called again four years later. And so it sometimes happens that adults who might even already have children of their own show up for their initiation.

This is a time when churches often stand empty. Why? Because our churches are usually filled with young people, and when their time for initiation comes, they are all pressured and sometimes physically forced to participate. Some escape and hide out until the ceremonies are over. Others, especially if they are still minors, have to participate against their will. But some stand up to the pressure. There is a lot involved in the decision, and it often affects more than just the individual.

Let me share with you the example of a young family. Raphael and Parfaite became Christians in 2019. When Parfaite gave birth several months ago to their second child, they decided not to have the traditional dedication ceremony for a newborn in order to introduce the baby to the spirits of the ancestors. As a result, the rest of the village, including their own family, shunned them and even tried to kick them out of the village. It was a lonely and miserable time for them, but the church family supported them as best as they could.

However, it turned out that Parfaite had followed her husband in his decision to follow Christ rather than being convinced herself. She was caught between her husband’s decision and her family’s tradition.

The times of the female initiation ceremonies approached, and she was expected to participate. Her family pressured her, but her husband let her make her own decision. So she decided that she would participate in the ceremonies. The next question was what would happen with the baby during the ceremony, which would last several days. The baby is still nursing and less than six months old. Generally, this is not a problem, as nursing mothers take their babies along. But tradition says that a baby who has not been properly introduced to the spirits as a newborn must not be with his mother when she goes to different sacred places during her initiation ceremonies, or he will die. A grandmother and an aunt had already declined to take care of the baby. In their minds it had been wrong not to present the baby, so it was all Raphael’s fault, and it was his responsibility if the baby had to die. This was especially tough since their firstborn child had died at only a few months of age.

Our evangelist Hyacinthe went to talk to Raphael and help him make the right decision based on his own faith. He told him, “Raphael, you know what tradition says. If your baby goes along with his mother, he will die, unless you still do his dedication ceremony. You can’t take care of the baby for the entire time of the ceremonies, and none of your female family members are willing to help. What are you going to do?”

After some struggling, Raphael replied to Hyacinthe, “If God will let the baby die, that’s okay. If God decides to save the baby’s life, that’s okay, too. He gave us this baby, and it’s in His hands. The baby will stay with his mother, and I will not do his newborn dedication ceremony.” Hyacinthe was very moved by this answer. It was like the answer of Daniel’s friends to King Nebuchadnezzar: “If it be so, our God whom we serve is able to deliver us from the burning fiery furnace; and he will deliver us out of your hand, o king. But if not, be it known to you, o king, that we will not serve your gods or worship the golden image which you have set up” (Dan. 3:17-18).

This is the kind of faith we are looking for. So many people come to church saying, “If God heals me, I will follow Him. If God helps me get this job, I will give my life to Him.” It’s the animistic worldview that makes deals with the spirits, thinking they can manipulate the spirits while in reality they are selling their souls.

We don’t want people to make deals with God. We want them to trust God no matter what. Praise God for people like Raphael! Would you please pray for him, his child and also his wife, that she may eventually see that Jesus’ love is so much better than anything the spirits offer?