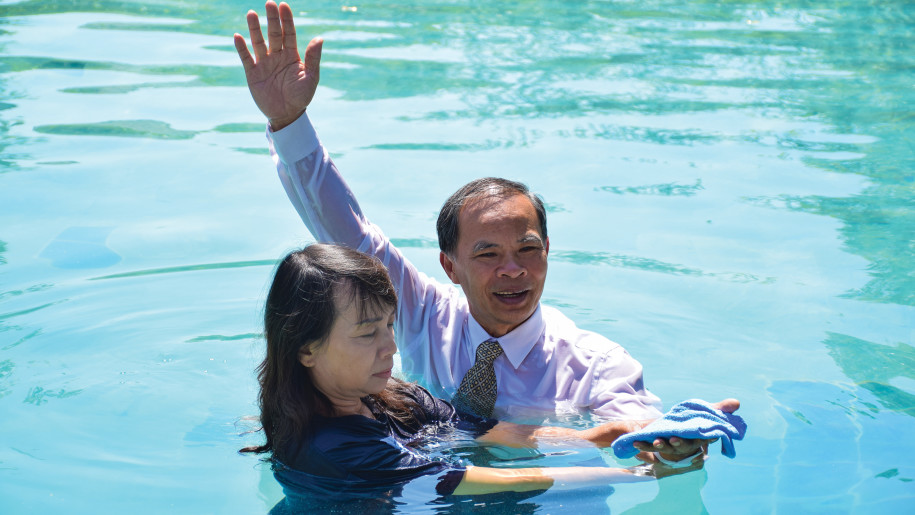 “Why are you an Adventist and not some other religion?” Phii Tiim earnestly searched my face for answers as she sat next to me on the couch. “Is it important to experience the outpouring of the Holy Spirit? How does it happen, and how can I experience it? How do you study the Bible?” Question after question poured forth from her. I tried to remain outwardly calm and composed though inwardly my jaw had dropped to the floor.

Phii Tiim and her son Dto had begun coming to our church in Khon Kaen intermittently at the beginning of last year. Since they were visitors and didn’t seem to have many connections in the church, I intentionally greeted them and spoke to them every Sabbath they showed up. While they were polite, I didn’t feel like I was successfully establishing a strong friendship with them or benefiting them in any way. Language was a bit of a barrier, but I kept respectfully approaching them and trying to make them feel welcome. Slowly they began to smile when I approached and started asking questions about my week instead of just responding to my inquiries. I was over the moon when, one Sabbath in May, Phii Tiim invited me to her home and offered to pick me up the next day on her motorbike. Riding as a passenger on her motorbike the following day, weaving through city traffic, I was unsure what the visit and day would hold, but I praised God that Phii Tiim trusted me enough to bring me into her home.

A mangy dog greeted me at the gate and wanted a belly rub, so I paused momentarily to oblige. While Phii Tiim put some water on to boil, I began to scan the pictures on the wall, enjoying glimpses of years past. She served me a cup of tea and a small pineapple pastry before sitting down beside me on the couch. Then, intently fixing her eyes on mine, she began to pepper me with deeply spiritual questions.

Phii Tiim’s eyes were sincere and seeking. Here before me sat a hungry, thirsting heart! Since she had been attending church for a while, I had assumed she was studying the Bible with somebody and having her important questions answered. But I learned that no studies had been started with her yet due to scheduling difficulties.
Despite the beauty of the moment, doubts about my ability to answer her questions began to creep over my heart. How was I supposed to overcome the language barrier that made itself very apparent whenever I tried to communicate deep spiritual topics? In an instant, I realized that God had qualified me for this exchange. Yes, He had provided that one struggle last week that revealed to me new glimpses of His character. He had awakened me that morning to have devotions. He had connected with me in prayer that afternoon. In essence, He had been leading me along the little path called the Christian Walk. Being a traveler on this path is really the only true prerequisite for sharing with others. And when God uses His children as His mouthpiece, He overcomes all earthly languages.

Breathing a prayer, I addressed Phii Tiim’s first question and the next and just kept going. I don’t remember exactly what I shared with her. All I recall was the look of understanding that spread across her face and the determination in her eyes to pursue what she had just learned.

Upon further conversation, I learned that her son Dto had read about the Adventist church by chance online. He was convicted about the Sabbath, found the nearest Adventist church and showed up one Sabbath, much to everyone’s surprise. That day during our visit she informed me that she was soon to start studies with the pastor and was wondering if I could join them.

As I left Phii Tiim’s home that day, I was in awe of what had just occurred, and I couldn’t wait for the next time. The following month, she stopped by my house for an impromptu study on why we can trust the Bible. Again I was amazed by how God helped me to communicate deep Biblical concepts with simple English and a bit of very limited Thai. Phii Tiim’s appreciation humbled me.

By this time, Phii Tiim and Dto were coming to church quite frequently, and she told me of their desire to get baptized soon. I could tell she was feeling more integrated with the church family. In July she had to move from her home and needed help transporting her belongings. Several of us from the church, including the pastor, Chris Sorensen and Bruce Hayward, spent most of a day helping her move and were able to get it all done. She was extremely grateful.

In August, before I was to go home for a short vacation, Phii Tiim called me and wanted to get together one more time. As we sat down together, I could tell there was something on her mind. Finally she asked, “How do you pray? How can I have a strong prayer walk? I pray and pray for some things, but God isn’t answering. What do you do when that happens?” Her genuine pursuit of understanding on these important issues was heart-melting. After asking for God’s grace yet again, I delved right in and shared my personal experiences with prayer. We agreed to touch base upon my return so that we could continue to grow together in this area.

Upon my return to Thailand in October, I was elated to see Phii Tiim again and hear about her growth. On November 3, 2018, my heart overflowed with joy inexpressible as she went down into the water of baptism and committed her life to Christ. God’s ways are amazing and past finding out! The way He brought Phii Tiim and me together was miraculous. She challenged me and caused me to grow immensely. And somehow in the development of our friendship, God was able to use me in her life as well. Communication hurdles, busy schedules, feelings of inadequacy, or any other complication cannot impede God’s ability and power to truly touch lives.