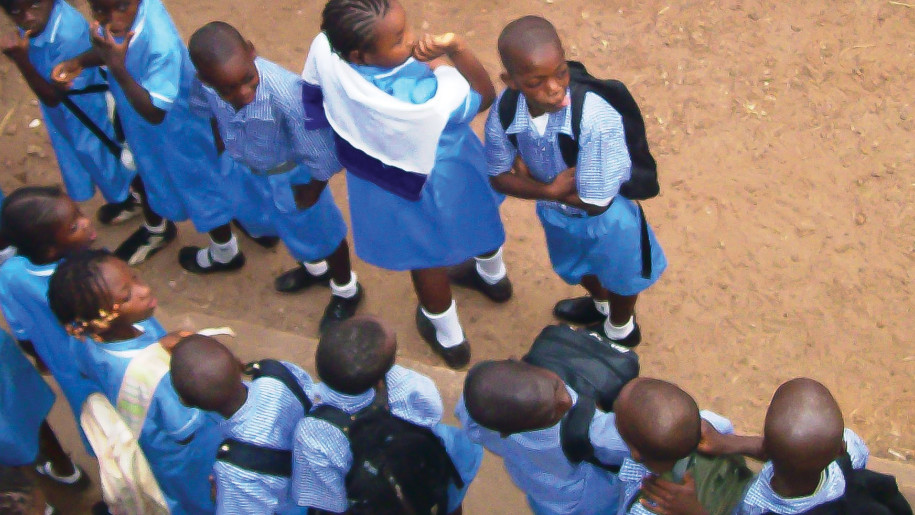 “Blessed are those who are persecuted for righteousness’ sake, for theirs is the kingdom of heaven. Blessed are you when they revile and persecute you, and say all kinds of evil against you falsely for My sake. Rejoice and be exceedingly glad, for great is your reward in heaven” (Matt. 5:10-12).
Madam Tumbu Kieta is the widow of Mr. Ansumani Kieta, the late founder of two school campuses, La Source and La Source Kimbo. When Mr. Kieta passed away, his wife took ownership of the school properties. We have been doing business with this lady for the past two years.

Our partnership with Mrs. Kieta was forged in adversity several years ago when our school first came under serious persecution. It all started when a delegation from the ministry of education in Conakry visited our schools in Fria in 2010. As we now understand, these delegates were bribed by the proprietors of several private schools here in Fria to file a negative report about our school. In their report, they recommended that our school be closed down because we were operating in an unfinished building.

At this same time, Mrs. Kieta was battling corrupt administrators at her La Source campus. One of our teachers, Mr. Soumaoro, knew about the problems this young widow was going through, and he informed us that she was seeking someone else to rent her campus, which was complete and met all Guinean school standards. We acted quickly and were able to strike a deal with her. This was an inspiration from God and became a blessing for Mrs. Kieta and for us.

As Mrs. Kieta’s confidence in us grew, she became eager to rent her second school campus, La Source Kimbo, to us as well. She had been dealing with greedy, corrupt administrators there for five years, and late in 2013 she reached her limit with all the expense and hassle. Because we had been faithful in our dealings with her as renters of the La Source campus, she decided to fire her administrators and offer La Source Kimbo to us to us as well. We jumped at the opportunity and started working out the details of our school’s expansion to a second campus.

Word spread quickly that Mrs. Kieta was planning to rent her second school to the Adventists. The response from the townspeople was mixed. Some were happy, and some were very unhappy. The Catholic Church sent a delegation to Mrs. Kieta and offered her three times the money we had agreed on. She replied, “The Adventists have never disappointed me. I will not disappoint them.”

Next, representatives from the Muslim community went to see Mrs. Kieta. They told her that, as a Muslim, she should not rent her schools to Christians. She replied, “I know these Christians. They rescued me when my fellow Muslims were cheating and robbing me. I will never let myself be fooled again.”

A delegation from the other private schools in Fria went to talk to Mrs. Kieta, but she turned them away. “I have closed the deal with the Adventists,” she said. “I will have no more negotiations with anyone else. They are now my business partners.”

This rebuff did not sit well with the Muslim community and the private school proprietors. Since the majority of them are Muslims, they conspired to wage jihad against us. (In the mind of Muslims, jihad can be any action that advances Islam and weakens non-Muslims.) The school proprietors were very worried about competing with us. Parents of our students spread favorable reviews about us far and wide. Because of our reputation for quality and affordability, many Christian, Muslim and animist families want to enroll their children in our school.

The private school proprietors went to the district education department and bribed them to stop us. They attacked everything we stand for as Seventh-day Adventists. They complained about us teaching the Bible and praying in our school. They complained about our shorter school days, and they complained that we close our school on Saturdays—all issues that were settled back in 2013 when their last attack failed.

We do not expect these attacks will ever entirely stop. From the inspired pen we read, “Those who keep the commandments of God and the faith of Jesus will feel the ire of the dragon and his hosts. Satan numbers the world as his subjects; he has gained control even of many professing Christians. But here is a little company who are resisting his supremacy. If he could blot them from the earth, his triumph would be complete. Those who are true to God will be menaced, denounced, proscribed. They will be ‘betrayed both by parents, and brethren, and kinsfolks, and friends,’ even unto death. Luke 21:16. Their only hope is in the mercy of God; their only defense will be prayer. As Joshua pleaded before the Angel, so the remnant church, with brokenness of heart and unfaltering faith, will plead for pardon and deliverance through Jesus, their Advocate” (Prophets and Kings, 587.1, 588.1 and 590.1). Our enemies are doing everything in their power to hurt us and close us down. Our faith is tested, but Jehovah Nissi is our refuge and our banner.

When we were once again summoned to meet the same district education director we had faced in 2013, we called on our only defense, the God Almighty. Responding to the same trumped-up accusations, I spoke very plainly: As long as we have legal authority to administer our school, we will continue to run it according to our faith. We will not change our position. They ended the meeting in anger, vowing to shut us down.
Throughout this ordeal, I have been in frequent contact with AFM International Field Director, Marc Coleman. I called him again after the meeting, giving him the latest news and requesting prayer from all our AFM colleagues. We gathered our local partners and staff together and had a season of intercessory prayer, committing everything to God.

After our prayer session, I began to call people in high places. Praise God, our education councilor was in town to prepare our teachers for the upcoming school year. His presence was a great blessing to us. He helped me by calling some of his friends at the Ministry of Education in Conakry. With God’s answers to all your prayers and help from people here, the problem is now settled. I know our persecutors will come back again with another strategy, but God will surely vindicate and protect His children.

Thank you all for your prayers on behalf of the Susu Project and our precious schools, where more than 700 children—mostly from Muslim families—are receiving an Adventist Christian education.

The God of Abraham, Isaac, Jacob and all that follow Him is sovereign.  He sits enthroned on high while His eyes roam the earth to and from – He neither sleeps nor slumbers. He is a shield of fire to His children and workers.  “Fear not,” He says, “I am with you….”