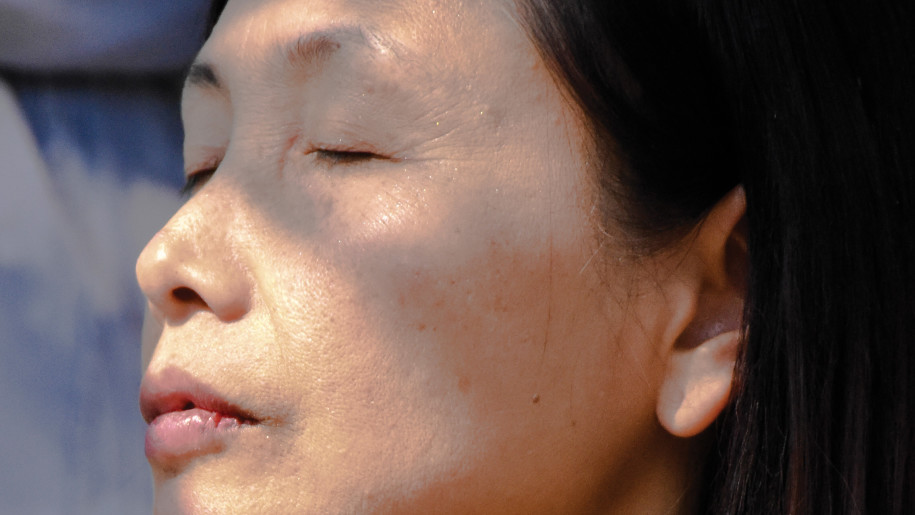 Everyone said that the factory was infested with ghosts, but Nok didn’t believe it—until she saw one for herself. This was certainly not what she had bargained for when she accepted a job as a quality-control inspector at a Gap factory in Brunei.

Nok had just gotten into bed when, suddenly, there it was—a burka-clad apparition descending on her. She immediately started praying to her patron monk, but the phantom kept coming. “The ghost doesn’t speak Thai!” she concluded in a panic. She jumped up and ran to her roomate’s bed. Her roommate, a Catholic Filipina, showed her a picture of Jesus and advised Nok to pray to Him.

The next night, the ghost returned. Nok closed her eyes and choked out the words in broken English, just in case Jesus and the ghost didn’t understand Thai: “Jesu, help me! I don’t want to die!” Nok felt a comforting warmth and opened her eyes. The room was filled with glorious brightness, and she felt safe. Soon, the room returned to normal, and she began to wonder if it had all been a dream. But her roommates had seen the shining light as well. “I realized that God knew me already,” Nok says, “and I believed in Him.” For the duration of her five-year work stint in Brunei, Nok attended mass weekly with a Catholic friend. “I didn’t understand anything, but I believed in God,” she says.

When Nok returned to Thailand, she wanted to become a Christian, but her mother became very angry and forbade it. It wasn’t until several years later, after her mother’s death, that she met a Christian man named Matts. She attended church on Sunday with him twice but had no desire to go again. Then she met Lung Chuen who invited her and Matts to our worship on Saturdays. Matts came a couple of times before Nok joined him. We were focusing on prayer the day they came together, and Matts shared how it had occurred to him to pray that Nok would become a Christian. A few hours later, she had come to him and said, “I’m going to that church with you.”

The rest is history. Nok changed her work so she could attend every Sabbath, and she began Bible studies. “I believed in God,” Nok says, but I didn’t know anything about him. The more I learn about Him, the more I love Him!” God has known Nok from before she was knit together in her mother’s womb. He has been close to her, even when she knew nothing of Him. As she has grown in her knowledge and faith, she can already look back and laugh at some of the things she believed, grateful for what she knows now.

Every person’s journey is different, and it may take years before we see how God weaves life experiences together until a person comes to receive adoption into His family. Some like Nok begin their journey by comomg to Him with a need or a problem, and they find their answer in Him. Also, we have a number of friends here who are not in crisis or experiencing a need, but they are looking for anything that will improve their lives and enhance their family experience. Our prayer is that, as Jesus is revealed through Christian community at Peace Music Academy and other social contexts, these people will gain a new curiosity and hunger that leads them to God.
Perhaps this is already happening. At Nok’s baptism, we had our first church visit from a music-school student and her father. The father has since told Chris Sorensen that he would like to attend each Sabbath and help with piano playing.

Nok’s journey, and the other journeys just beginning, remind us to continue in dependence on God who has proven that He is the One who starts and finishes the great work of redemption in each heart.