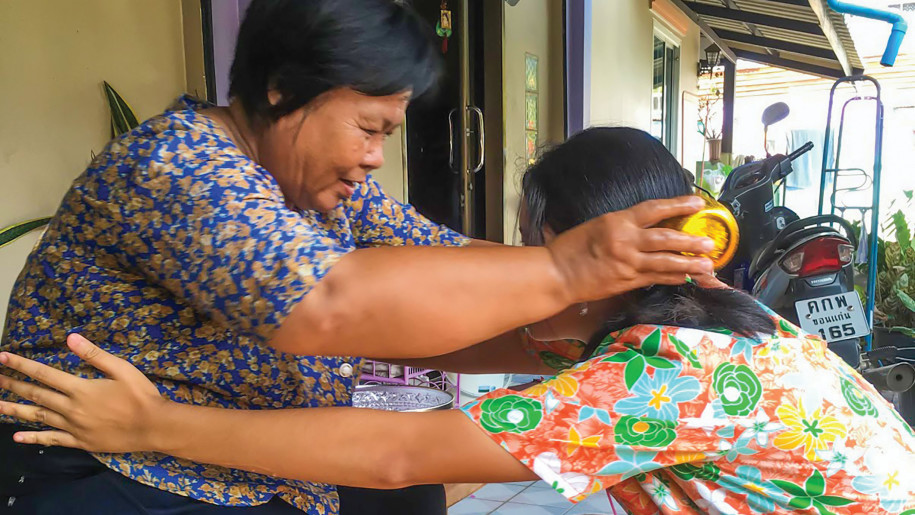 When Aorm first began coming to church and taking music lessons at Peace Music Academy, I remember thinking that she was a very gifted young lady—polite, outgoing and highly conversant for her age. Why did she start coming in the first place? One of our members, Yai Tongjan, began bringing her to church at the request of her grandmother and primary guardian, Yai Kiat. No doubt, Yai Tongjan had shared with Yai Kiat about her experiences at our church and how her life had changed since she began to believe in Jesus. She also shared that there was opportunity for Aorm to spend time with our teachers, learn some English and develop her music skills.

After attending our church and music school regularly, Aorm’s love of God and His people began to grow. I had the privilege of studying the Bible with Aorm, after which she was baptized, also with her grandmother’s approval.

Everything seemed to be going great in Aorm’s life. Not only was she gifted in music, voice and languages, but also in academics and sports. Her teachers often chose her to be her school’s representative in speech competitions, track-and-field events, and even table-tennis competitions. In fact, Aorm was so good at table tennis that one year she qualified to go to the nationals for competitors in her age group. Her grandmother Yai Kiat was so proud of Aorm’s accomplishments, especially in table tennis. But as it often happens, that success became a spiritual obstacle for Aorm. Her teachers began sending her for weeks at a time to intensive table-tennis camps where she had to practice from morning till night.

Soon after Aorm was baptized, she told her table-tennis coach that she didn’t want to compete anymore. She wanted to keep the Sabbath and be more involved in our newly formed Pathfinder club. That didn’t go over well with her Buddhist coach. Immediately he went to Aorm’s house and pled with her grandmother to say or do something to change Aorm’s mind. Yai Kiat called Aorm out of a Pathfinder meeting and demanded that she return home immediately. Shannon took her home. Later we learned that her grandmother yelled at her, hit her with a stick, and told her that she couldn’t go to church ever again. Aorm was crying when she texted to tell us that she didn’t think she would ever see us again. Not only was she forbidden to come to church, but she was no longer allowed to take music lessons at Peace Music Academy—all so that her table-tennis success might not be hindered!

We all began praying for Aorm and her grandmother, and we continued trying to reach out to them. For Thai New Year, our church paid them a visit and prayed a prayer of blessing for them. Then I believe God gave me another idea. Even though Aorm could not come to our school to study music, I proposed to take my daughter Alina to Aorm’s house to practice violin with her there every week. Yai Kiat wasn’t opposed to the idea. Every week while the girls were practicing, Yai Kiat and I would talk in her living room.

When it was time for one of our regular recitals at PMA, I asked Yai Kiat if she would allow Aorm to perform together with Alina for the event. Thankfully, she agreed, and Yai Kiat herself came to see Aorm play! Once again, she was so proud of her granddaughter, this time for being able to play such beautiful music, which really was the highlight of the recital.
At the reception afterwards, one of our Church members approached Yai Kiat and asked if she would be willing to allow Aorm to join a string ensemble at PMA. She agreed! Then, about two months later, our PMA director, Teacher Tone, went to visit Yai Kiat and asked if she would allow Aorm to come to our PMA school every day to practice, because he had a plan to have Aorm become a part-time music teacher and earn income to help pay for her own school expenses. Praise God, once again Yai Kiat agreed! Now Aorm is able to come to PMA and even to church again with no more trouble from her grandmother.

But that’s not all. About two months ago, as I arrived at church one Sabbath morning, who do you suppose I met? Aorm’s grandmother, Yai Kiat! She has officially retired, and now as she is entering the time when many Thai people begin to focus on their spiritual wellbeing, she has decided to pursue a relationship with Jesus. This last Sabbath marks eight weeks in a row that she has attended our church. We are so glad to have her! One of our other Thai members, Khun Sumalee, has really taken Yai Kiat under her wing and befriended her, introducing her to some old Thai Christian songs that she really loves to sing. This coming Sabbath, Yai Kiat and Khun Sumalee are going to sing one of those songs as a special music. What she doesn’t know is that our young worship team and international choir are going to “spontaneously” start plays and singing backup for them like one of those musical “flash mobs” on YouTube. It should be a lot of fun, and no doubt it will also do much to bond Yai Kiat to the rest of church members. Using music in ministry at PMA has been a powerful and delightful opportunity for me and my family the last several years. Thanks be to God and to all of you, our dear friends, family and supporters, for making this possible. Of course, with our special project to build a new worship and ministry facility, it will soon be possible to do this kind of ministry in an even bigger way. Exciting days just ahead! Stay tuned.