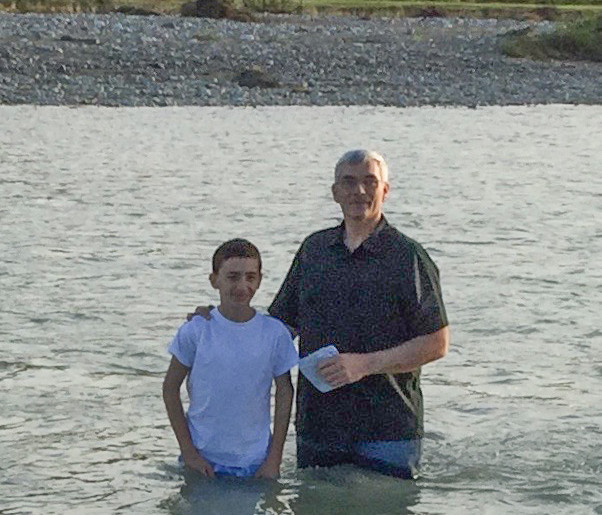 When we were new Christians, Sean began to regularly pray a prayer that seemed strange to some folks. He thanked God not only for our blessings, but also for our trials. He even thanked God for the difficulties we would face in the future.

It’s not that we wanted or invited hardship, or that we thought God caused bad things to happen, but we understood that He could be trusted to measure and weigh everything that touched our lives. Though some things may seem unbearable, He would not allow more than we could bear through His grace. We sensed that we somehow needed those trials in order to grow in faith and be prepared for the rest of the journey. God knew the road ahead of us, and we needed to trust that He knew what He was doing even though we didn’t understand it at the time.

We became Christians after we were married and had started our family. One of the earliest lessons we learned was that being a Christian doesn’t necessarily make life easy. Knowing Jesus as our Lord and Savior does, however, make life good. “We are troubled on every side, yet not distressed; we are perplexed, but not in despair; Persecuted, but not forsaken; cast down, but not destroyed” (2 Cor. 4:8, 9).

Since coming to Albania, our trials have not lessened. In fact, they have grown more intense. Yet God has blessed us in ways we couldn’t have imagined. We have embraced Romans 8:28, so when trouble comes along, we now think about it differently.

First, we look deeper to determine if there is a lesson we can learn. Often, we’ve said or done things that have brought consequences that may feel like attacks. This drives us to spend more time in reflection and prayer. Next, we try to discover if God may be closing a door in order to redirect us to a better way. Finally, we ask ourselves if the enemy is attempting to turn us away from the path God has set before us. We’ve found that just before every breakthrough or major blessing in His work, we’ve had tremendous trials. If we determine that the third reason is the cause of our pain, we try to look beyond it to the joy ahead. This kind of trial can make us even more determined to stay on course.

Some sort of ordeal has preceded every baptism we’ve had here, and each one has been unique. The troubles usually come to both the person who has made the decision and to us. Satan uses any tool at his disposal to prevent a baptism from happening. Almost every new member has had family or friends try to turn them away. One woman even threatened to leave her husband if he went through with the baptism, though they both had been worshiping with us for a long time. She was afraid that he would never get hired again if he became a Sabbath keeper. The enemy used fear against her. At his baptism, she repented and laid plans for her own baptism. She has since become our most fearless evangelist.

One of our daughters was in grave danger and had to leave the country before our first baptisms of a Muslim-background family. We were strongly tempted to leave our work at that time, but God impressed us to stay on course.

Illness, bad weather and unexpected crises have delayed some baptisms. One young man postponed his baptism several times because his mother had suddenly turned against us. He finally was baptized at the end of December in the icy river where we have always held our baptisms.

Gjoni and Thomi, two brothers with an Orthodox background, were involved in the occult. Our lady evangelist worked with their family ceaselessly. The brothers began to study and worship with us. Many months later they decided to be baptized. Sadly, they postponed it several times. Sometimes they avoided us for several months and seemed to be attempting to run away from God. Our fellowship prayed for them often. Gjoni returned to worship with us. He recommitted himself to God and wanted to be baptized. As the date grew closer, he again postponed it, prompting us to redouble our intensive prayer for him and with him. Finally, he said he was ready to set the date for the following Sabbath.

That Friday, Sean was struck with intense kidney pain and vomiting. A kidney stone was making its way out. We called a couple of church members to start the prayer chain. Nexhip went to the pharmacy to see if he could get something to prevent the vomiting and pain. Dani and his son came to offer their assistance. Seeing Sean’s intense pain, Dani left briefly and returned with a doctor and a nurse. During this time, other church members heard something was wrong and showed up at our home. They gathered around Sean to comfort him and to pray. One sister knelt down beside him as tears rolled down her cheeks. It was a terrible ordeal, but it was beautiful to see how our little group of believers truly are a family and deeply care for one another. Sean suffered for five days, and his blood pressure climbed dangerously high at times, but he finally recovered.

The following Sabbath after worship, we gathered at the river where 17-year-old Gjoni was baptized. His brother Thomi, his sister and his mother attended the ceremony. After the baptism, Sean and Nexhip spoke to the gathering. The boys’ mother committed to Bible study, and Thomi renewed his decision to be baptized. Also, our lady evangelist told us that her own 10-year-old daughter wants to prepare for baptism as well if we think she’s old enough. It was a day full of blessing and joy!

Please join us in praying for Gjoni and his family. Both he and Thomi have Thalassemia, a serious genetic blood disorder that stunts their growth, causes pain and threatens their lives. Gjoni has recently been receiving state-subsidized treatments that have helped him feel much better and increased his chances of survival. However, the assistance will end when he becomes an adult, and the cost to continue treatments is well beyond his family’s meager income. Thomi is too old to receive the subsidized treatments, so his health is worse. Medically speaking, the only hope for a cure is a bone-marrow transplant, which they hoped to get from their sister, but the expense is beyond them. Gjoni and Thomi had difficult lives without much hope until they met Jesus. Pray that God will be glorified in their lives and that many more will be reached through their testimony.