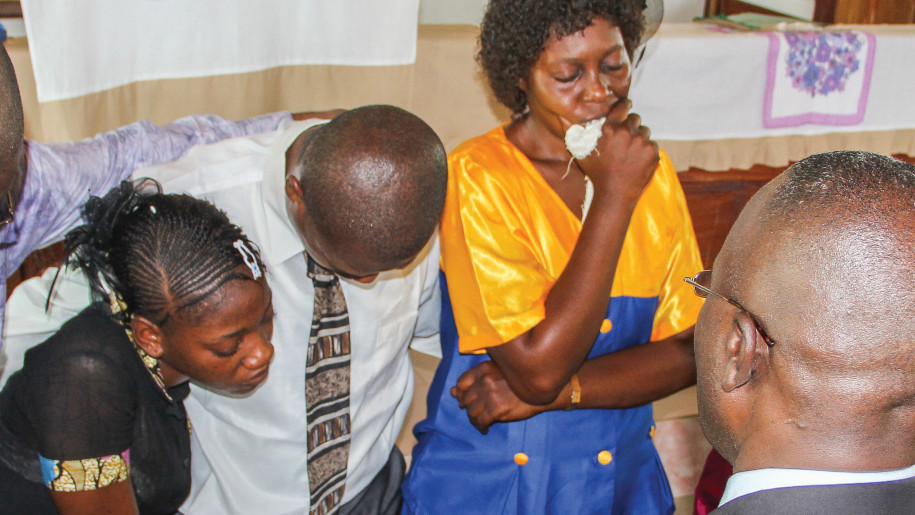 I would like to introduce you to the Tooray family—George and Theresa, and their 19-year-old daughter Georgette. The Toorays are preparing to take over leadership of the AFM Malinke Project in Mali as the Lovitt family returns to the States.

The Toorays have been working with us here on the Susu Project since 2007. Like us, they were trained and mentored by Marc and Cathy Coleman. In 2010, when we went to Michigan for AFM training, they directed the Susu Project and led our little church group.

George’s father was a social worker, and his mother was a primary school headmistress in Sierra Leone. After high school, George attended a trade school in the city of Bo and graduated with a degree in civil engineering. Then he married Theresa.

In his youth, George had been an enthusiastic Methodist, eagerly participating in his church’s ministries. However, he began hanging out with the wrong guys, and he wandered away from Christ. His work as a bridge engineer kept him constantly on the road and exposed him to all kinds of vices. He fell into habits of drinking and smoking.

During Sierra Leone’s 10-year civil war, he was assigned to fix a bridge about 50 miles from the capital Freetown. A few hours after he and his two helpers finished their work and left the area, rebels entered the village, killing people and burning houses.

As George drove toward the capital, he encountered a roadblock set up by combined government and West African peacekeeping forces. George was drunk, and he tried to force his vehicle through the roadblock. He and his helpers were arrested. To make matters worse, one of his helpers had a tattoo that made the authorities suspect he was a rebel, so George came under suspicion as well. George was finally identified as a government worker. However, his helpers were still detained, so he stood up for them and argued with the authorities. This earned him a trip to the military prison in Freetown. At this time, the rebels were just 30 miles from Freetown, and everyone was on edge. After three days of trying to extract information from George and his workers, the authorities concluded they were rebels and should be executed.

As the three men awaited the firing squad, one of the prison guards happened to overhear them talking about a church convention where one of them had served as a translator. The guard opened the cell door and asked them to explain their story. Convinced of their innocence, he negotiated their release, and they were freed.

In January 1999, rebel forces advanced into the eastern part of Freetown, randomly murdering people or chopping off their limbs. When the Toorays’ neighborhood came under rebel control, George desperately prayed, “God, if You deliver me and my family from this trouble and save us from amputation, I will live the rest of my life in service to You.” God performed a miracle, and a rebel showed them the way to safety.
As refugees, the Toorays moved to Conakry, Guinea. Wanting to fulfill his vow to God, George went looking for a Methodist church, but he found fellowship at one of the Nigerian Pentecostal churches in Conakry. A family at that church were also Sierra Leonean refugees, and they shared a courtyard with us, so we met the Toorays when they came to visit.

Learning that we were Seventh-day Adventists, George began asking questions about our church and the Sabbath, which led him to Bible studies with me and, subsequently, with Marc Coleman. George started asking his Pentecostal pastor a lot of questions, and the pastor threatened to denounce him as a rebel to the Guinean government. Taking this threat seriously, the Toorays immediately left the Pentecostal church and became Seventh-day Adventists.

For a year after his baptism, George worked as a Global Mission Pioneer. When the work of Global Mission was closed in 2006, he decided to return to Freetown. He prayed, “God, if You want me and my wife to continue serving You in this country, please open the way.” God opened a position for a lay worker at the Susu Project, so the Toorays moved to Fria and joined our work. Since then, George and Theresa have been faithfully serving God and keeping their vow to Him.