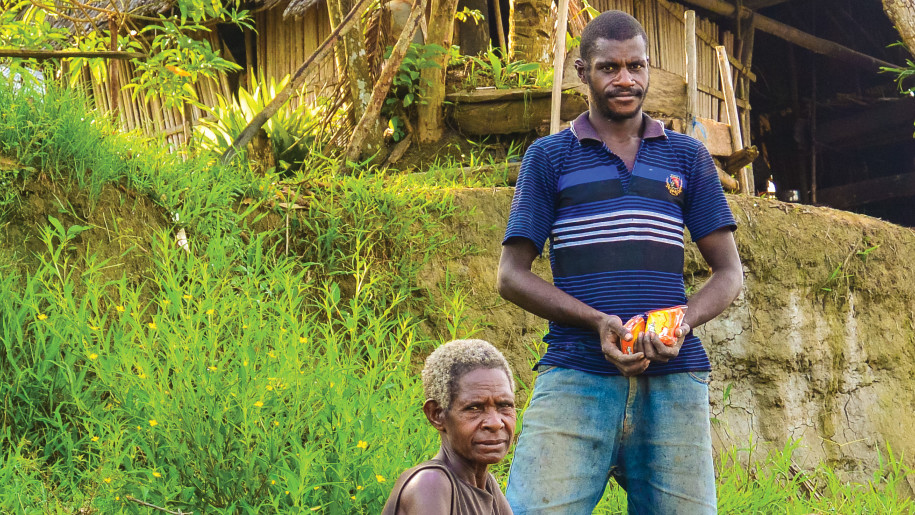 A friend of ours in the United States has an unusual hobby of collecting and restoring old steel hand tools including axe heads from the early to mid 1900s. He donated four five-gallon buckets full of axe heads for us to give to those in need along the May River and its tributaries. These old axe heads were not junky imports like we see today. They were made to last a lifetime.

Stone tools have been used in PNG for generations. I remember seeing stone axes in men’s houses in 1995. But today they are just a memory. Sadly, many of the men and most of the teenagers can’t afford to buy a steel axe. Machetes are cheap enough, but try cutting down a huge ironwood tree with one.

Our first memory of Malai, a shy 16-year-old, was when we were setting up our ham radio antenna. We needed someone to climb a tall coconut tree close to our house and tie our antenna wire up at the very top. Malai was the only one courageous enough to climb above where the coconuts grow. Later, when we needed to have our grass cut, Malai and his brother used their machetes to do the job in half the time it took other boys. I later learned that they were saving up money to help pay for their fourth-grade school fees. I found out that he and his brother were without a father. They were alone in caring for their mother and two sisters.

Over the course of time, we became friends with Malai. Whenever we met, we would snap fingers together in May River’s traditional greeting. We liked to tease each other. Soon Malai began to attend worships and church services.

When the axe heads from my friend in America arrived, I quietly sent most of them as gifts to many villages. I also saved a few to hand out to deserving people. Malai was very excited when I presented him with an axe with a homemade handle.

After receiving his axe, Malai disappeared for several weeks. I began to worry about him and wondered what had happened. When I saw him next, he was bubbling with happiness. He had spent the last few weeks using his axe to cut a garden for his family out of the jungle. But that wasn’t all. He had also cut ironwood logs to make his family a new house.

Please remember Malai in your prayers. Over the last two years, we have watched him mature, fall in love with Jesus and be baptized. He now dreams of finishing school and becoming a nurse.