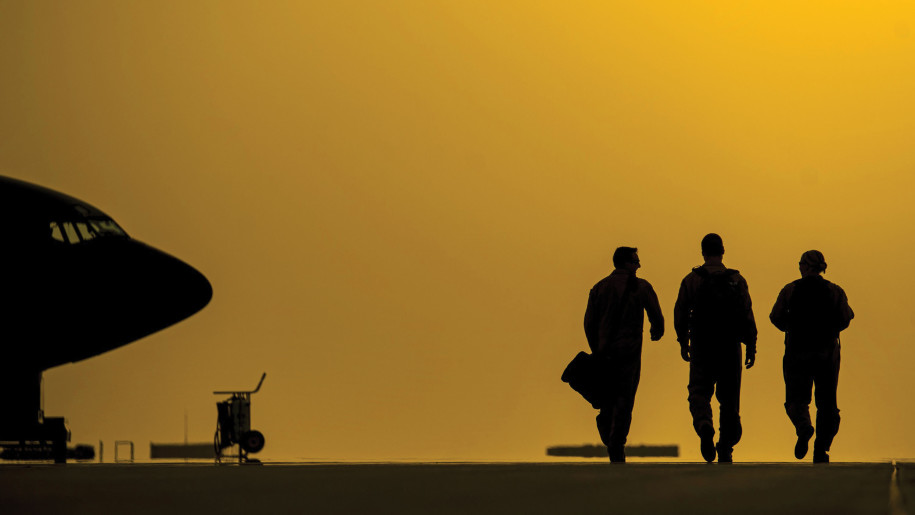 God is willing to do anything, even send us halfway around the world, just to open our eyes to what’s in our hearts. At least, that’s what He did for us.

Sean was an agnostic Air Force man when we met. About a year and a half after we were married, his squadron, the 335th TFS Chiefs, was called to serve in war. I had just given birth to our first child nine days before he flew out to the Middle East. Not knowing what the future might hold, he made a cassette recording of his voice reading a children’s book and giving a personal message to our tiny baby girl. While he was away, I played that cassette often so she would recognize his voice when he returned.

Sean was able to contact me occasionally. I knew that enemy forces were launching Scud missiles toward the desert region where his squadron was deployed. I knew that their sleep was often interrupted by alarms and warnings blasting over loudspeakers, ordering the troops to put on their gas masks and chemical-warfare gear. I watched live TV as a journalist in the camp frantically put on a gas mask as a Scud missile exploded nearby. I cringed as he told the world how close that one was and gave the general direction of the missile relative to their location. I imagined the enemy soldiers using that information to take better aim for the next missile launch.

Sean began thinking about God more than ever during those battles. He came back changed and more caring, but not as for the people of the same faith as the soldiers he had been fighting.

At one point during the war, his squadron had targeted a particular city in former Mesopotamia for bombing. Decades later, in a way that couldn’t have been coincidental, this all came flooding back to his mind.

The way Sean and I became Seventh-day Adventist Christians is another story. And even more incredibly, God called us to serve people of the same faith group and heritage as Sean’s former enemies. God made His calling to us crystal-clear, guiding us to reveal His love for these people by opening the gospel message to them. We couldn’t do that effectively if we held fear, hatred or even dislike in our hearts for them. So God prepared us by encouraging us to pray for them.

“You have heard that it was said, ‘You shall love your neighbor and hate your enemy.’ But I say to you, love your enemies, bless those who curse you, do good to those who hate you, and pray for those who spitefully use you and persecute you, that you may be sons of your Father in heaven; for He makes His sun rise on the evil and on the good, and sends rain on the just and on the unjust” (Matt. 5:43-45).

Frankly, once we met the people and experienced their beautiful hospitality for strangers, it was hard not to love them. We genuinely longed to share the good news of the greatest Gift ever given. Once we became close friends with several who were willing to lay down their lives to protect ours, we were beyond grateful that God had blessed us in calling us to leave everything behind and go to a land we knew nothing about. Then, He blessed us further.

We have been serving as coaches for other overseas workers for several years in addition to working on our project in Albania. As providence would have it, we ended up spending time in a city just outside of the one Sean’s unit had targeted decades before. This time, it had been taken over by a large group of violent men, and the residents had fled in terror. They were now refugees. Many of them were survivors of the bombing unleashed by planes like the one with Sean’s name painted on it. Oh, what compassion we had for them now! But that wasn’t the end of the story. It got even more incredible.

That nine-day-old baby girl Sean had to leave behind to go to war was now grown. She was recruited to serve overseas to aid refugee women from that very same city as a midwife. Many of the refugee women had been baby girls whose daddies once battled against people like her own dad.

God had brought us full circle. That agnostic military man was now serving in an entirely different sort of battle to bless those whom he had once considered his enemies. That mama who was worried she would be widowed by strange people with a strange religion was now graciously welcomed into the homes of strangers of that faith heritage and shared the Bread of Life with them.
It didn’t immediately occur to us just how amazingly God had arranged it all. But when it finally sank in that God had done all of that to teach us how to see others as His image bearers, to teach us to love our perceived enemies and to share the good news of the Prince of Peace with them, we were entirely overwhelmed. What a God we serve!

With all that is going on in the world today, many perceive that our window of time to sow seeds of truth is closing. Thanks to people like you, hope is shining into many of the darkest corners of this world, but there is still much to be done. We hope to continue this work for as long as God allows, but our project funds are in need of additional support. If God puts it on your heart to pray for and financially support an AFM project, please don’t put it off. Will you enlist in this spiritual battle today?