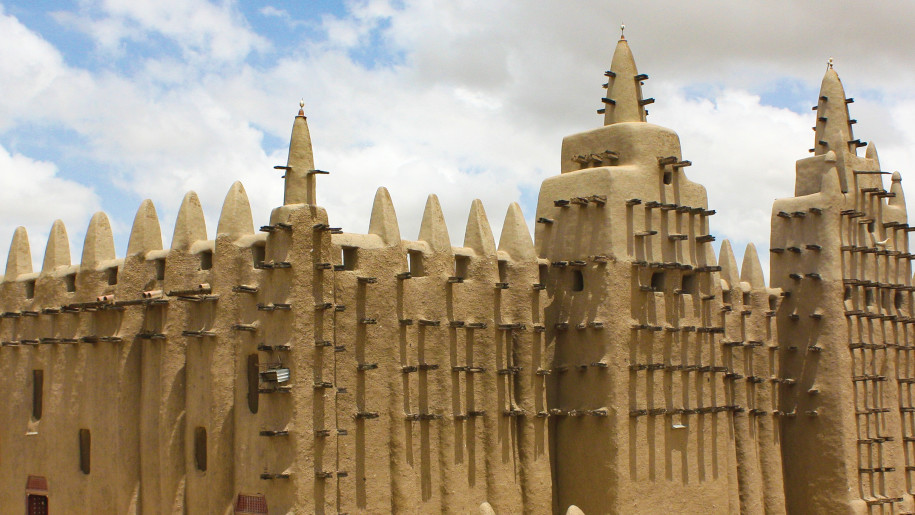 In the year 1236, The Mali Empire was founded in present-day Bamako under the leadership of Sundiata Keita, Soumaoro Kante and Touramakay Traore. These were the heroes of the Mali Empire. They were proud of their accomplishment, the world’s first government based on a constitution, called the Kurukanfuga. The Kurukanfuga put in place social and economic reforms including prohibitions on the maltreatment of prisoners and slaves. It installed documents of understanding between clans that clearly stated who could say what about whom. Also, Sundiata fixed exchange rates and divided the land among the people, assuring everyone a place in the empire. The Mali Empire grew vast, stretching across Mali, Niger, Guinea, Ivory Coast, Burkina Faso, Senegal, Mauritania, Guinea-Bissau, Gambia and northern Ghana. It became a larger kingdom than any in Europe at the time. The cities of Mali became important trading hubs for all of West Africa as well as famous centers of wealth, culture and learning. Timbuktu, an important city in Mali, became one of the major cultural centers, not only of Africa, but of the entire world.

Each year, Malinke people gather from all over the world for a Kurukanfuga conference to celebrate their heroes, culture and tradition. Before this conference is held, government officials send invitations all over West Africa, and many countries send representatives to the event. Young men prepare the conference grounds, building seating areas for more than 1,000 people, cooking food for attendees and arranging lodging. This preparation work is taken very seriously. If a young man arrives late for work, he will be beaten publicly. Only the Toures are not touched, because they are esteemed as Quranic teachers or Mande-Mory. If they arrive to work late, they are fined.

The mayor of Bamako opens the conference, introducing the distinguished guests and the theme chosen for that year to help people remember their history and culture and how to develop and solidify their relationships. Various groups from different countries are represented, and they sit in special places of honor. The old men tell the history of the Mali Empire. The most famous practice is the sanakoya or “joking relationship” among clans. There are also dance groups from different countries to entertain the guests. Hunters demonstrate their skills. Various demons will be highlighted, and the rite of circumcision will be demonstrated.

The goal of the original Kurukanfuga was to reinforce the solidarity of all Malinke people and remind them of their origins. It contained 44 edicts about aspects of daily life, such as marriage, naming ceremonies, circumcision, funerals, respect for elders, love for one another and the tribe, agriculture, fishing and on and on. As missionaries, we are very interested in the Kurukanfuga and the history of the Mali Empire. As we study these aspects of Malinke culture, we look for ways to relate them to biblical truth. Though founded in animism, many parts of this cultural legacy have redeeming qualities. If we can point people to the Giver of all good things, how meaningful and wonderful might their lives be!

The memory of the Mali Empire still burns brightly today largely thanks to the work of griots—professional historians, praise singers and musical entertainers among the Malinke people who still play an important role in Malian society. If a professional griot would accept Christ and begin telling the stories of the Bible, many people would come to know their Savior. Please pray that God will send us a griot to tell His story and spread the culture of heaven.