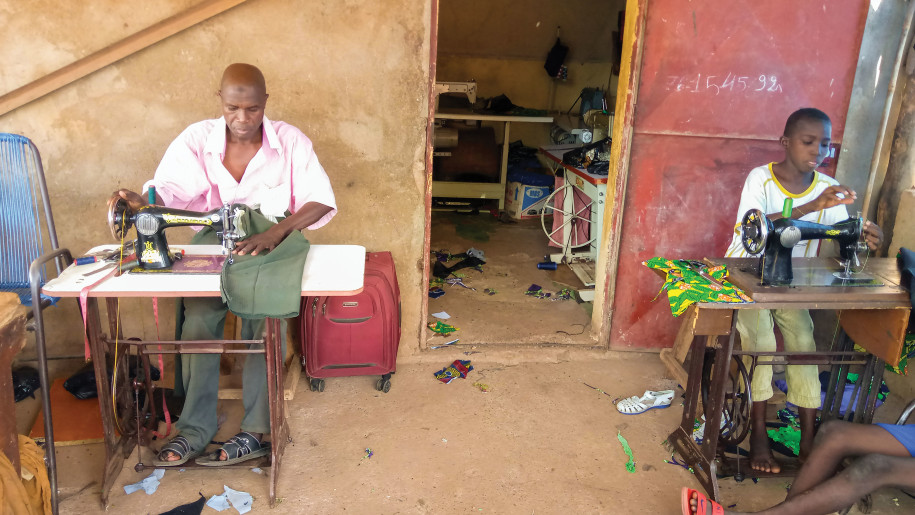 Komba is a tailor, a Sierra Leonean like me who fled the country for the same reason—civil war. I met him through a member of our group. We talked about our homeland and Mali, the country where we now live.

With our shared past, we got along very well, and Komba opened up to me. He told me about the hardships he had been through. Two of his marriages had failed, which brought him trauma, frustration and depression. He told me he had wanted to marry a Christian girl, but he had been disappointed. After that, he had a dream in which his grandfather was teaching him how to perform ablutions, the Muslim purification ritual. In the dream, he found himself praying with Muslims. Komba also had a repeating dream in which a man dressed in white asked him to become a Muslim. He thought it was God speaking to him.

Komba converted to Islam, lured by false promises that they would give him a wife and a considerable amount of money.

I told Komba that it was the devil taking the form of his grandfather in his dream, but it was difficult for him to understand. He said that if God wanted him to become a Christian again, He would speak to him. I was encouraged by this because I know that God often speaks to people who are seeking Him.

I offered to study the Bible with Komba, and he agreed. However, he always had excuses for not showing up. I invited him to church, and again he said he would, but then made excuses.

When Komba found a Fulani woman he wanted to marry, he asked for my support. However, I told him that was not the woman God wants for him. He was not pleased with my advice. Later since Komba still wanted to go ahead with the marriage, my wife and I decided to help him make all the necessary arrangements for a traditional wedding. But the girl and her parents deceived him. Betrayed, discouraged, and abandoned by his Muslim brothers, he was stressed and depressed.

Komba began to show signs of schizophrenia, a disorder that affects a person’s ability to think, feel and behave normally. He started accusing a young man in the neighborhood of making death threats to him. He became suspicious that the young man was also after the girl he had wanted to marry. He reported the young man to the police, though he had no evidence. I became an intermediary between Komba and the young man to resolve the matter. But it was no use because Komba kept accusing the young man and saying people wanted to kill him. Recognizing his need, our group began praying for him every day.

One night, Komba went running out of his house screaming that people were after him and wanted to kill him. Running blindly, he fell into a well. Fortunately for him, the well was not full of water, and people came to his rescue. The next morning his landlord came to inform me about the situation. I called my evangelist to go with me to the village to see our friend.

When Komba saw us, he started crying. We tried to calm him and to let him know that we are there for him. He told us that he didn’t want to live anymore. He kept on insisting that people wanted to kill him, and everyone was against him. I told him that we care for him and wanted to help him. As I was talking with him, others were praying for him. I invited him to confess Jesus as his Lord and Savior. It was difficult for him, but he managed to do it, and we prayed with him.

We took Komba to our mission house, and I called his brothers in another city. We decided that I should take Komba to them if possible. My wife gave him food and water to wash. He spent the night in our house, and the next day we prepared him for the journey. He seemed to be in a better state of mind and offered that he could go alone. I praised God for the improvement in Komba, but I told him I would go with him to make sure everything went well. He was very grateful.

The Lord directed us to a woman who put us in contact with the doctor. Many people were waiting ahead of us, but she took us straight into the doctor’s office. I introduced myself as a missionary and explained Komba’s problem. The doctor examined Komba and was able to assess his mental state.

Thank God, after a few days, Komba started to recover his mind. He resumed work and says he wants to give his life to God. We praise the Lord for saving Komba’s life. Komba needs your prayers, as he has a long way to go in his journey of healing and learning about God.