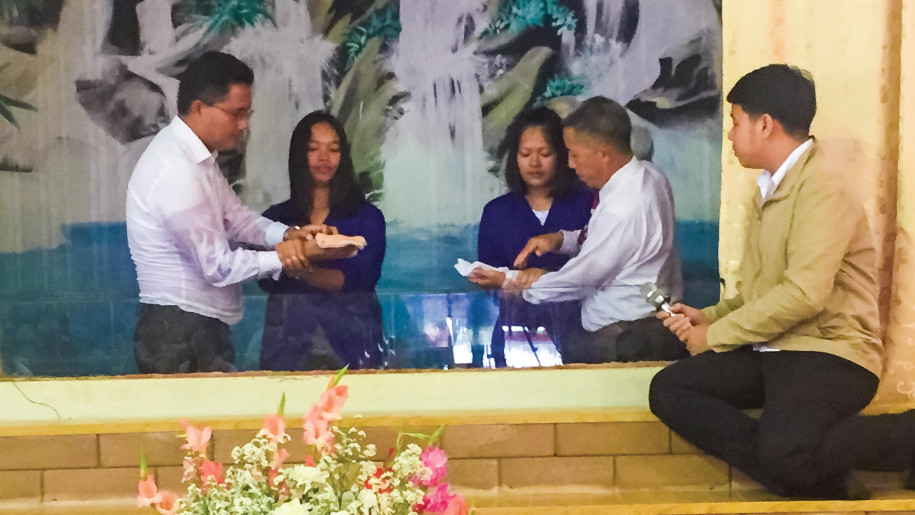 Ice is a quiet teenage girl who lived in a village about 40 minutes outside of Khon Kaen. I first met her more than four years ago when I went to visit her family after her Thai aunt Mod and American uncle Josh visited our church. Mod had converted to Christianity several years earlier and eventually became a Seventh-day Adventist before marrying Josh. Upon learning about our church, Josh and Mod came to visit us one Sabbath when they were in the area visiting their family. Having a burden to reach her family, Mod asked us if we would go and visit them. She mentioned that her sister and brother-in-law’s family and her mother were reading the Bible and had an interest in Christianity. We gladly agreed to visit them and made an appointment.

Mod’s mother Mee Nuay, her sister At and brother-in-law Eat were very friendly and gladly welcomed us into their large, tin-roofed, cabin-like country home. Their open front porch was spacious enough to accommodate up to 30 people. Visiting with them on the porch surrounded by fields of rice and sugarcane took me back to summer days on my grandparents’ Midwestern farm when I was a child. I immediately felt a connection to this family and began to pray for their salvation. Our visit went well. Though they weren’t ready to begin formal Bible studies, we left feeling like we had an open invitation to come back and visit whenever we pleased.

Over the next year, we visited them occasionally. In the summer of 2016 we were finally able to begin Bible studies with them on Sunday mornings. I would usually bring a group of Filipino church members and several village children to sing and do activities with the children while our Thai pastor and I would study with the adults. We were greatly encouraged to see their growing interest and their desire to follow Jesus and honor His Sabbath.

After some time, their commitment began to wane. They would come to church less often, and our visits became less frequent. The pressures of work and family began to overwhelm them. They still appreciated of our efforts to reach out to them, but they were reluctant to make a firm commitment.
But Ice was different. Josh and Mod told me that Ice still wanted to become a Christian. In fact, after one of her visits to our youth group Sabbath School class, Ice told my teammate Chris that she wanted to stop watching movies with her parents. I knew that the Spirit was working on her heart, but I felt torn about what to do. I wanted to disciple her as an individual, but I also wanted to see her come to the church with her family. I didn’t want to drive a wedge between them.

After Ice graduated from high school last year, she made plans to spend a year with her uncle Josh and aunt Mod in Chiangmai where they were starting a small homeschool program with about five Thai youth. Ice went to help with the school and to develop her English language skills so she could enroll in a university the following year. Living in this environment provided Ice the opportunity to grow spiritually, be involved in active ministry and be mentored by her uncle and aunt.

A couple of months ago, I received a message from Josh asking me to pray for Ice. She was ready to get baptized, but her mother was forbidding it. In Thai culture, the sense of obligation to honor one’s family is very strong. I remember hearing about a Thai language teacher who had become a Christian but then returned to Buddhism because of pressure from her parents, even though she still believed the Christian message. I knew this would be a real test for Ice, so I began to pray that she would stand firm in her decision.

Two days later I received another message from Josh telling me that they had visited with a Thai pastor about Ice’s situation, and he had counselled Ice to submit to her parents in this matter. Needless to say, we continued to pray, not knowing what Ice would decide to do.

In January I traveled to Chiangmai to conduct a week of prayer at the Adventist academy. While there, I was able to connect with Josh and Mod. One evening while having supper with them, I asked them where Ice was in her decision process. Josh responded emphatically that she was going to get baptized! “She told me that she doesn’t care if her mother yells at her,” he told me. “She is going to follow Jesus!” This was an especially significant stand since her parents had told her that they would not support her college education at AIU, the Adventist college in Thailand, if she got baptized. Three days later, Ice went into the water with 18 other academy students and rose again as a new creation in Christ Jesus!

The gospel truly has the power to conquer all opposition, and we rejoice in the bold stand Ice has made. Please pray for her as she continues to grow, and please pray that her parents and grandmother will make the decision to follow Jesus completely.