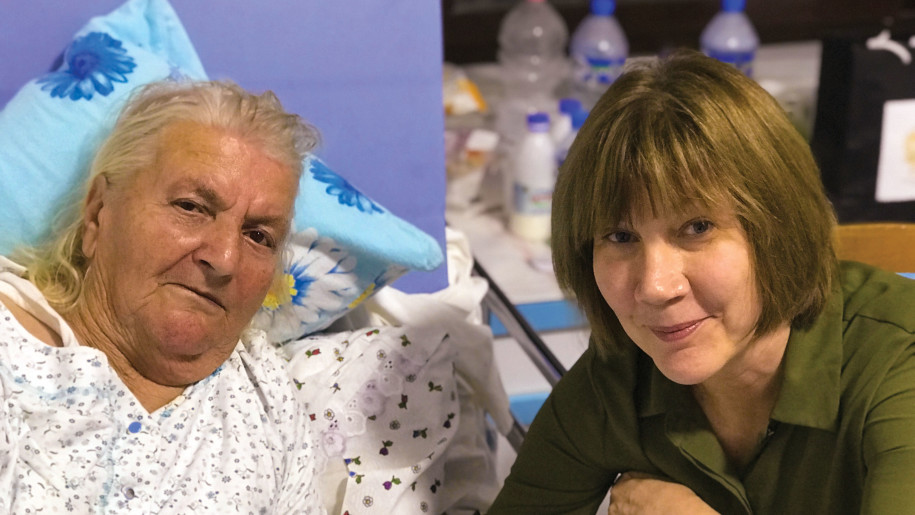 Fatima can always be counted on to greet us with many joyful kisses. Her husband, a religious leader of another faith, died 10 years ago from a stroke. We became very close with the family and spent a lot of time with them. We ate together, chatted together, worked together in their shop and did life together.

Sean spent time with Fatima’s son Dani almost every day, learning and practicing the local language and building their friendship. At the family’s request, I began to tutor Fatima’s beloved granddaughter, Fabiola, and Fatima’s daughter-in-law in English and built close friendships with them. At first we met for our lessons in the back of the daughter-in-law’s shop or elsewhere, but later we held them in their home. Grandmother Fatima always greeted me with kisses and made sure I was served refreshments. Then, as we began our lessons, she quietly busied herself with other things, but often remained in the same room.
By that time in our English lessons, we were using a Bible in the Albanian language along with an English Bible and discussing what we read in order for them to practice English. Fatima couldn’t understand the English part, but I later realized that she must have been listening to the Bible reading in her language. One day she picked up a book I had given to her daughter-in-law about the life of Jesus. She held it to her heart and whispered, “I love Jesus.”

Although Fatima’s son Dani and his family became baptized Seventh-day Adventist members, Fatima did not. Because of her poor health, she rarely left the house and didn’t attend group activities. However, the family worshipped together in their home.
Recently, Dani called Sean. “Come quickly! Fatima has suffered a massive stroke.” Sean and I had both lost our mothers recently, along with my father and several other family members who died in quick succession. Now we faced losing our Albanian “mother.”
When we visited Fatima in the hospital, she was still primarily concerned about our comfort. Though her speech was slurred, and she had no feeling or movement on her left side, she always asked others to let us sit down, and she wanted to know how we and our children were doing.

Just after our visit, Fabiola was able to get to her grandmother. She cleared the room of visitors and spent about an hour alone with Fatima. She reviewed the beautiful gospel story with her and then asked if she wished to accept Jesus as her Lord and her Savior. Fatima replied, “With all of my heart! Jesus is Lord!”

Fatima immediately rallied. Dani told us that when our church group prayed, she felt strength. However, after a couple of days, she began to fade again. The doctors sent her home, saying it was only a matter of time. Sean helped Dani get her home and into an adjustable bed so she could be more comfortable. Each time we visited, she seemed less aware of her surroundings. She was shutting down.

One morning we got another urgent call from Dani. “Come quickly!” was all he said. We were expecting the worst, but when we arrived, Fatima was sitting up, moving her arms, and talking excitedly, her speech much clearer. What she said next took our breath away. “I had a dream,” she said. “I was hurting and feeling bad. I opened my eyes and saw a man sitting on that chair.” She waved her arm to point out the spot. “I asked the man who he was, and he stood up. He was gentle and beautiful. He came to my side and said, “I am Jesus. I am with you. Don’t be afraid. I am with you.” Fatima’s nearly toothless smile lit up the room. “Jesus spoke to me in Albanian!” She laughed. “After I talked with Jesus, I felt so good and peaceful, I went back to sleep. I still feel so good!”

Then one of Fatima’s sons, one who doesn’t know Jesus, entered the home.
(To be continued.)