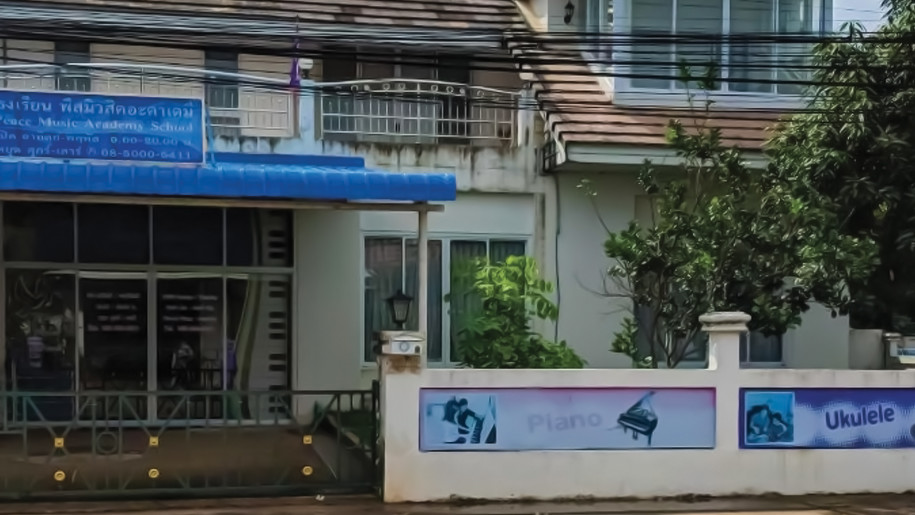 More than five years ago, the missionaries of the Central Thai Project made the decision to start a music school. The first step was to find a suitable location. But after months of checking out rental properties in the city, trying to determine where God was leading, nothing seemed to work out. Our former partners and pioneer missionaries in Khon Kaen, Ricardo and Alicia Palacios, initially rented a multi-story building to double as a home and school. But after living there for a number of months, they realized that the building wasn’t going to work, so they moved out. Where would they live now? Did God have a better place in mind for the school? They continued to pray and search.

Finally, God led the project’s Thai music teachers to a two-story, three-bedroom house in a quiet village by a big lake. Although a residential house tucked away in a small village was not, in our team’s opinion, an ideal location for a public music school, it seemed to be more than adequate to meet the immediate need. The downstairs living room was wide and spacious, making it ideal for group classes and music recitals. The upstairs had three rooms that could serve as classrooms for individual lessons. Outside, there was a fenced front yard that wound around the corner of the building. Although only about 15 feet wide and 30 feet long, it was big enough for children to run around in for play breaks. Many parents commented how much they liked our school because of its safe, quiet, family environment. The fact that the school was located in a residential neighborhood and not in the heart of the city was actually a selling point.

This same two-story, three-bedroom house also became home to the Khon Kaen Seventh-day Adventist Church. The big downstairs living room became a sanctuary every Sabbath. The upstairs classrooms became Sabbath School rooms; the covered car port provided an ideal place for potluck lunches; and even the kitchen at the back of the house was conveniently located with its own outside door, making it easy for people to bring in their potluck dishes without having to walk through the living room/sanctuary. Like the parents of our music students, the church members commented how much they enjoyed the comfortable, home-like feel of the new church.

As both the school and the church grew, I was amazed at how this modest little house seemed to grow with us. When classroom space became a problem, we converted the little office between the kitchen and living room into a classroom by installing sliding glass doors on the living room side and adding an air conditioner so the teachers and students could work in comfort. When it became evident that the living room would no longer work as both a classroom and waiting room, we enclosed the covered car port with glass walls, carpeted the cement floor, added another AC unit and moved the secretary’s desk there so she could easily communicate and connect with the waiting parents.

On the church front, when the number of English-speaking internationals began to increase, and we didn’t think it was practical to continue to have them worship with the Thai members, the upstairs master bedroom became home to the first-ever Khon Kaen international church service, allowing us to hold two services concurrently (now we have two services downstairs at different times). Because the shaded car port was now the school waiting room, it could no longer be used for potlucks, so we decided to extend the roof on the front of the building to cover the area between the waiting room and the front gate. This new arrangement provided enough shade to set up tables for potluck on Sabbath afternoons. Also, the front lawn is just big enough that we can erect a large meeting tent that allows us to set up additional tables and chairs. This past November, we hosted a “big Sabbath” for all of the churches in our region, and more than 200 people attended. Between our living room, waiting room and tents, everyone was comfortable.
Our two-story, three-bedroom house has indeed grown with us and enabled us to host many kinds of events including Thanksgiving and Christmas outreaches and health seminars. It has become like a home to us and has served our purposes quite well. However, the owner of the house recently told us that his daughter wants to move in, so he has asked us to vacate by April, 2019. Two years ago, the Thailand Adventist Mission purchased land in Khon Kaen so that a new church and school can be built. We have been developing plans for the new facility, but it will not be ready for occupancy by April, so we are beginning the search for a facility to use temporarily. Although we don’t know where we will end up, we are confident that the same God who led us to just the right spot more than five years ago can do the same thing for us again. Please keep us in your prayers as we seek a new temporary location for our church and music school.