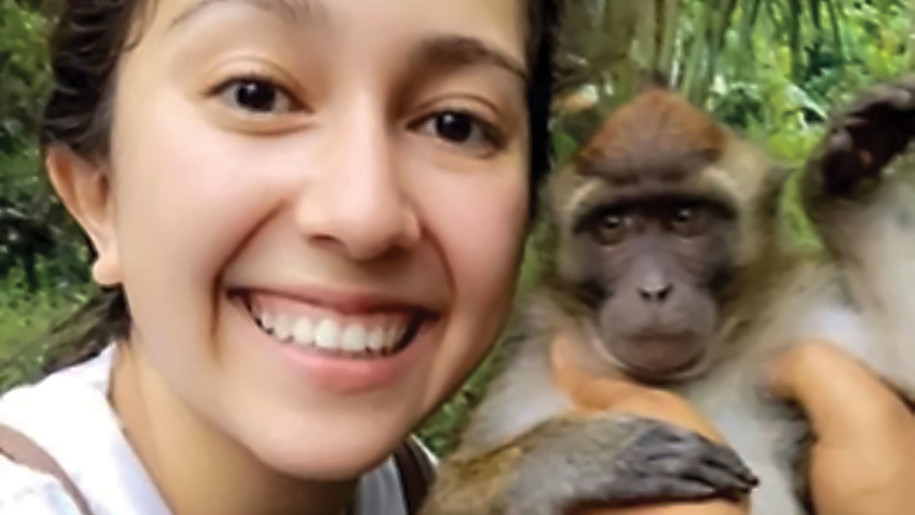 When student missionary Janna Q. went to serve in the Philippines, she soon realized that the entire project revolved around people. She made friends everywhere. And when she was introduced to a mischievous little tyke, well known for leaving a trail of chaos behind him, she set all warnings aside and made friends with him, too.

Not long afterwards, this little troublemaker showed up at the door and explained that he needed to go somewhere but was very afraid. He begged for someone to go with him. Since he wasn’t known for being afraid of anything, Janna and her roommate, Jacki M., were a bit surprised, but with a little coaxing, they finally agreed to escort him safely to his destination. Relief showed on his face as the little group headed down the trail. Arriving at a stream, the “fearful” little boy promptly jumped in and splashed across. Then he waited while his “protectors” carefully picked their way through the rushing water and slippery boulders until they arrived at precisely the middle of the stream. At that point, the little fellow yelled, “Good-bye!” and ran laughing up the trail leaving the two now-wiser student missionaries to wonder how they had been so easily duped—by a seven-year-old!

In the days that followed, the little menace found great pleasure in reminding them of how silly they had looked standing in the middle of the stream, but he also delighted in bringing them little gifts of food and begging for opportunities to help. “I can wash the dishes!” he would offer, or, “I can chop wood. I’ll sweep, too!” They also taught him to bandage wounds and apply charcoal poultices. Then came the day he was able to add, “I can pray!” to his list of accomplishments. And pray he did.

Unfortunately, their little friend and his family moved away, but a short time later he sent a message. He wanted to come back and live with his student-missionary friends because he knew they would take good care of him. He couldn’t live with them, of course, but the fact that he knew they cared meant a lot.

Janna and Jacki reached out to more and more people throughout their community and learned to deeply love them as well. They had friends everywhere, and when Christmas rolled around, the two student missionaries decided to share a small gift with each one of them as a tangible reminder of how much their friendship meant. Janna and Jacki were caught off guard when their friends showered them with gifts, hugs, tears and words of gratitude in return.

“This was one of the most humbling experiences I’ve ever had in my life,” Janna said. “I did not expect the amount of gratitude and love that was given to us. I learned from their example to be grateful for every little thing, to be more generous in giving everything I have, and to continue to love like Jesus did. I am so blessed to be part of this project and to have the opportunity to minister to these people. I could not ask for anything more.”

Rachel B., an SM in Asia, told me that relationships were a critical part of her student-missionary service as well. She talked about the importance of communication, learning the local culture and remembering both God’s call and His ability to help us fulfill that call. But when it came to relationships, she stressed that these WERE her mission.

Rachel makes a good point. If discipleship revolves around the daily lives of people, how in the world are you going to make disciples if you don’t know anybody and don’t have any friends? Lindsay R., an SM in Asia, points out that one of our major responsibilities as missionaries is to convey the love of God, and we don’t have to preach to do that.

She is right. If people don’t understand that God is love, other Bible truths have little appeal, and since love is relational, it is best conveyed through relationships. The mere fact that people have relationships, though, doesn’t make them missionaries, it just means they have a platform for ministry if they choose, and making that choice isn’t always easy.

Janelle L., an SM in the Philippines, recently related a story that beautifully illustrates this point. After sharing pictures of herself among friends, she mentioned that her daily work routine in the mountains left her in a constant state of fatigue, and she often wondered what in the world she was doing there. She went on to share how she fought this constant battle in her head between what she knew needed to be done and what she actually felt like doing. Every day’s ministry, including friendship building, meant pushing herself beyond what was comfortable.

On one particularly rough Friday, Janelle was ready to wind down, prepare for the Sabbath and relax. However, sensing that her help might be needed at a school some distance away, she set her fatigue aside and dutifully headed for the school. That led to her meeting a discouraged mother along the trail and an opportunity to remind her of God’s love. Thus encouraged, the mother then invited Janelle on a much longer hike to visit in her home. That led to yet another battle in the student missionary’s mind. Should she do what was comfortable, or further invest in this young mother? She smiled at the mother. She would invest.

The mountain trail eventually led to a fabulous view. Janelle was inspired with a strong sense that she was where God wanted her to be, and that He was there with her. It also led to a deeper friendship and a chance to play with a pet monkey—all memories she will cherish forever. She left memories behind as well. The family on the mountain knows she cares, and they speak respectfully about her and her Jesus. In other homes, people still talk about Lindsey and Rachel and their God as well. Even the seven-year-old “menace” still talks lovingly of his student missionary friends.

If you would like to be a student missionary, why not give us a call? And if you are unable to go but can support those who do, remember that student missionaries rely on the Student Missionary Fund for about 60 percent of their ministry support. Your gifts to this fund make their ministry possible and forever change lives all over the globe. Thank you!