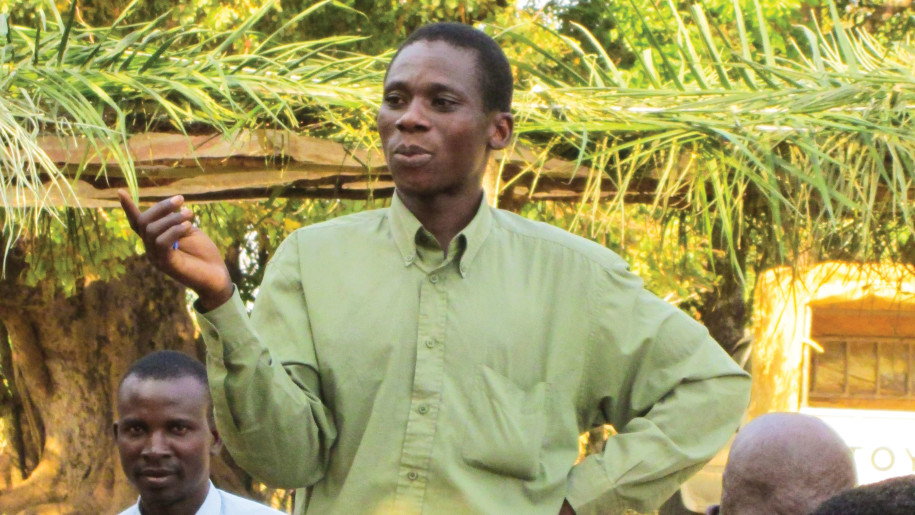 In August of 2020, our evangelist, Hyacinthe, asked us to pray for his cousin Antoine, who was seriously ill. Although Antoine had never been a drinker, he was diagnosed with liver cirrhosis and the doctors didn’t give him any hope. He had four children and his wife was pregnant. As if a fatal illness was not enough, the extended family, who are animists, were pressuring Antoine to go to the village to perform certain rituals. Antoine, being a faithful member of the Assembly of God church, refused. Over the following weeks, we regularly prayed for Antoine and his family. We prayed for healing if this was God’s will, but we especially prayed that God would help him remain faithful. Hyacinthe often went to pray with him and to encourage him, thus becoming his special friend. Antoine, who sensed that the end was near, entrusted his family to Hyacinthe’s care. As a result of this deep, confidential relationship, Hyacinthe was accused of hindering his cousin from performing the necessary ceremonies. They even called for a family meeting to settle this issue. But Antoine declared in front of everybody that it was his own free will not to go to the village for spiritual treatment and that he would rather die in Jesus’ arms than live under the reign of Satan.

Shortly after that, Antoine died. His wife, who was just as faithful to God as he had been, awaited the birth of their fifth child. One Monday at the beginning of February, she tried to call Hyacinthe to tell him that she had gone into labor. She could not reach him. However, at that very hour, we were having our prayer time and Hyacinthe had previously asked us to pray for her and a safe delivery of the baby. God doesn’t need a cellphone network to communicate with his children!

Fast forward a few months. We were having another team meeting and were discussing miraculous healings. Some people with various ailments had come to the church in Boukombé asking for prayer. Some were healed. Others were not. The question arose as to why God sometimes answers our prayers for healing while at other times He does not. I shared my thoughts: “I believe that sometimes God does not heal because He is more glorified in our sicknesses and the way we trust Him during difficult times than He would be if He healed us. Just think about your cousin, Hyacinthe. I’m sure that his and his wife’s faithfulness during his sickness was a powerful witness to everybody around, probably more than a healing miracle would have been.”

At that point, Hyacinthe exclaimed: “Oh, I totally forgot to tell you! Listen to this…” And then he gave us the most incredible news. Not long after Antoine’s death, one uncle, a fetisher who had viciously tried to force Antoine into spiritual rituals, had given his life to Jesus! He had been so impressed by Antoine’s faithfulness amid his sickness that he just had to find its source. In the end, Jesus conquered his heart. Now the whole village was agonizing. He was the head fetisher and responsible for performing sacrifices and other rituals for the clan, but now he declared that he wasn’t going to do these things anymore. Jesus had given his life a new direction and he wasn’t going to turn back.

When Hyacinthe finished telling us this amazing story, we all praised God. The uncle’s conversion was a powerful reminder that the greatest miracle of all is when someone turns from his old ways and gives his heart to Jesus.