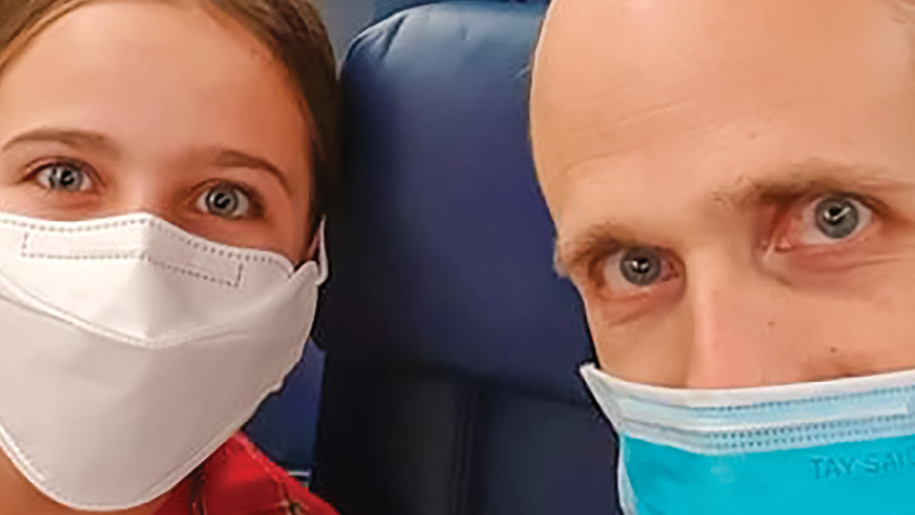 The day before we were to return to Cambodia from furlough, Autumn tested positive for COVID-19. We had been scheduled to return the first of December, but Cara didn’t have medical clearance from her ligament repair on her left ankle. In addition, we still hadn’t been able to visit my family, so we had rescheduled for the last week in December to return, but now COVID-19 had hit our family. Somehow it was only Autumn who had the dreaded coronavirus. We are thankful that all she had was a slightly sore throat and some sinus drainage. How do you plan for the future with a virus like COVID-19? How do you know how long to plan for the illness to pass and get a negative COVID-19 test result? When would be a reasonable time to purchase airline tickets again for the return trip? We wanted to strike a balance where Autumn had enough time to recover and start getting negative test results and yet not stay longer than necessary. After consulting with a trusted doctor friend, and Laurence Burn, our field director, we rebooked our flights for the 20th of January. Thankfully, United Airlines refunded all of our tickets at 100 percent. The travel insurance company allowed us to change our dates of coverage and the travel agent even waived the usual change fees! We were so thankful for God’s providence!

Getting the proper test results back within a 72-hour window of time prior to our flight leaving Denver was tricky. It was compounded due to all the red tape on the Cambodian side. So, our doctor’s note had to be written in a specific manner with certain requirements. We had to explain the same thing to the children’s doctor, and that note had to be done in the same fashion. The nurse working with us stayed late with the doctor in order for everything to be printed, signed and stamped in the proper way. It was a last-minute ordeal like I have never seen before. The children’s doctor’s office could not figure out how to print the lab results on the official lab paper. The nurse called the lab, and they could not seem to send the results to the right fax number. Finally, the nurse who was talking to the lab suggested the results be sent to her email (not HIPPA approved) so that we could get them printed out the right way. After waiting almost an hour with nearly all the lights turned off, we left the office with the correct document stamped and signed. With the doctor’s notes in hand, we returned home to complete our last-minute packing. As we were tying up our loose ends, we realized that we needed an extra bag to fit everything. This would cost more, but it needed to be done. With only three hours of sleep, we headed off to the airport and arrived before any Delta staff could be seen. Thankfully, the scales were working, and we were able to weigh and adjust all of our bags so that they fit airline regulations.

We got a jewel of a lady to help check us in. Cara and I laughed as she started reading the travel requirements for flying to Cambodia. Her eyes continued getting bigger the more she read! She had never worked with someone traveling to a country with the requirements that Cambodia posted. Thankfully, Cara had all our documents in order with enough copies of each so that we could leave them with officials, as needed. We also had $10,000 in crisp new $100 bills for our COVID-19 “down payment,” necessary to enter Cambodia. The lady was amazed and thankful at the level of detail to which Cara had gone to prepare everything. It made her work a lot easier. We explained the nature of our work and that this has been the most difficult time we have had getting into Cambodia.

When she got to the eleventh bag, she noticed the old carry-on luggage was too large for the newer airline regulations. She said, “That looks like a carry on to me. I’ll just check that through for you to Phnom Penh.”

“That’s okay,” she said with a twinkle in her eye. “If you have any other carry-ons you would like to check, I can do that for you, too. You can pick them up in Phnom Penh.” She gave us the eleventh bag for free!

As we were waiting to board our second flight in Detroit, I was looking at everything that had happened up to that point and at everything that lay ahead. We would have to claim having more than $10,000 when flying internationally, which we had never had to do before. They announced over the loudspeaker that customs officers were waiting to question boarding passengers about how much we were carrying and that passengers should be honest about their claim. When we got to the officers, Cara told them the amount and they looked quite surprised. That made me a bit nervous. What if we were doing something that we weren’t supposed to and didn’t know it? They began questioning us, and Cara went on to explain that we had to carry $2,000 cash for each of us to enter Cambodia. The amount we had told them was only a guess because we had to count it very quickly right before boarding. They explained to Cara that we had to fill out a form and claim what we were carrying. Cara told me later that she was nervous, too, because she didn’t know if they were going to count the money and if a discrepancy would cause us more problems. One of the officers asked another if they should count the money. We held our breath and the other officer responded, “I doubt they are lying with that kind of money.” I could see nothing but God’s handholding to keep us on this journey. This was not the kind of trip we could have made on our own. This was God confirming that he had more work for us to do in Cambodia.

Thankfully, the flights were relatively easy. Detroit to Seoul, South Korea, just blew my mind. Our cabin sported seats for approximately 165 people, but there were only six passengers — our family plus one other man. The stewardesses told us we could stretch out and lie across as many seats as we needed to in order to get some good sleep. The last leg of the journey was packed as usual with people flying into Cambodia from Seoul.

The arrival in Phnom Penh for the COVID-19 check point went without incident. They required a $4,000 deposit to cover both Cara and me, but nothing for the children as they were under 15 years of age. This saved the project $6,000 dollars! Thankfully, all of our bags arrived unscathed. The COVID-19 testing went smoothly, but we still didn’t know where we would be staying and what the food would be like. After boarding a bus with lots of other people and all of our luggage, we found ourselves at a Chinese hotel in downtown Phnom Penh. As we got off the bus, all passengers and bags were sprayed with a disinfectant before being allowed to check into the hotel. After everyone was inside, they locked the front door of the hotel. This would be our home for the next two weeks.

We had to pay for two rooms so we would have enough beds for everyone to sleep on. We requested vegetarian meals. We were expecting to pay $150 per day so that each of us could have three meals. When we got up to our rooms, we were pleasantly surprised to find that the rooms were connected by a door so we could move freely from room to room without going into the hallway outside. The rooms were beautiful! We were 13 stories up and one of the rooms was a corner room. Windows stretched from floor to ceiling. The corner room even had a washing machine! Hot pots and a range in each room made cooking easier. We were still apprehensive about how our meals would work out. Using a messenger group for foreigners in Cambodia, Cara was able to connect with another foreign traveler in our same hotel. Using a phone number for an employee at the Ministry of Health, the other traveler helped the employee to communicate with the front desk on our behalf. In the end, it was agreed that the hotel would bring us lunch each day, and that was all we were to be charged for. We had brought enough food to cover our breakfasts. Though it took about a day to get the vegetarian meals sorted out, we were able to get the food we needed. This was amazing! We also soon discovered that we could run down and up the stairwell, providing us with our daily exercise.

When our time at the hotel was over and we were checking out, we looked at the bill and were pleasantly surprised. The hotel had only charged us for Cara and my meals and hadn’t charged anything for the kids! We left feeling blessed, refreshed and ready to start working again! I want to say thank you to each one of you who were praying for us! God blessed and provided what we needed every step of the way.