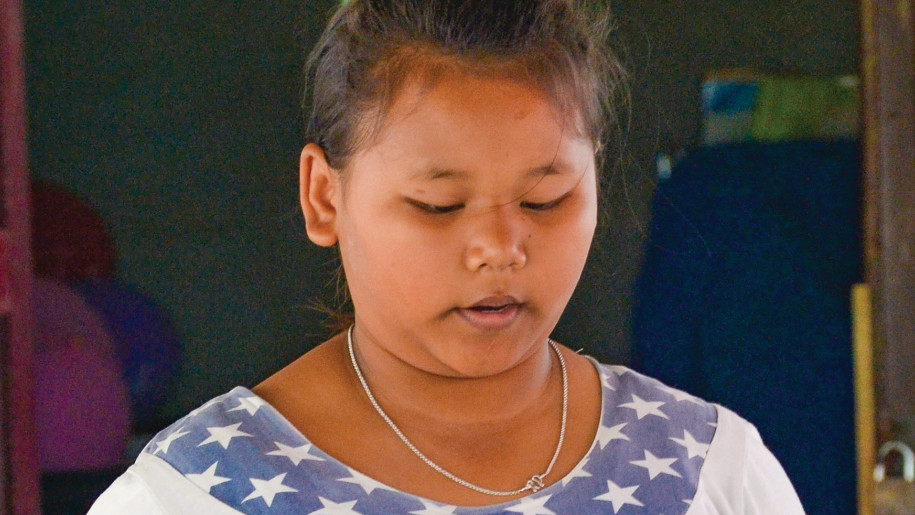 Every time I see Eve in church, I breathe a subconscious sigh of relief.

We met Eve when we first moved to Thailand four years ago. She was only nine years old, an age when it was still fun and acceptable to come to the kids’ program at the Non Gluay Hom village. Her leadership gifts made her seem bossy, and she was hard on the other children. But over time, she became more encouraging and kind. When we raised funds for some of the village kids to study at Peace Music Academy, her parents gave her permission to enroll. It turned out that she was not only bright academically, but musically talented as well. Soon she was leading worship, singing and playing ukulele.

Eve’s prayer requests were serious and heartfelt. We were as happy as she was when she told how God had answered her prayer to help her alcoholic grandmother drink less. Eve’s parents work in Bangkok, a six-hour bus drive away, and she lives with her grandmother, helping to care for younger twin brothers. Sometimes the kids would come to Khon Kaen, and whenever we dropped Eve off at the square cement building she calls home, I felt waves of concern (and still do) for the environment and dangers she is exposed to.

When Eve asked her parents about becoming a Christian, they told her she had been born a Buddhist, and that was that. But they encouraged her to continue attending the kids’ program, telling her that all religions teach good things, and it was good that she was practicing her English and learning to play the ukulele. The blessings of Eve’s involvement with the church did not go unnoticed by her parents.

As we watched Eve develop, we prayed earnestly that she would not follow the way of the other Non Gluay Hom youth when they hit their teens. One by one, kids we had come to love would stop coming, preferring to join a different peer group and entertain themselves with other teenagers. While the history of missions in Thailand has encouraged us with evidence that seeds planted in childhood can and do bear fruit later in life, we wanted Eve to embrace Jesus now and stay with Him all the way. We dreamed of her becoming a leader in this place for God.

The Non Gluay Hom group now meets each Sabbath with our growing congregation in Khon Kaen, and Eve is still a regular. She joins the musicians with her ukulele during our singing time and sometimes helps with the younger kids. Thanks to the generosity of our supporters, Eve is able to take piano lessons at Peace Music Academy.

This year, Ricardo and Pastor Wanlop had the opportunity to talk to Eve’s parents when they were visiting from Bangkok. They asked if we could send Eve to study at the Adventist boarding school in Chiang Mai. Her parents, who are now willing to let Eve make her own religious decisions, said she could go when she reaches tenth grade. We know of several Thai leaders in the work here who accepted Jesus and were discipled for service at that boarding school.

Eve plans to study medicine and continue to follow Jesus. Thank you for the prayers and financial investment you have made on behalf of Eve and others through your support of our project. Only in heaven will we know the full extent of the blessings of your sacrifice, but it brings us joy and encouragement to see, even now, lives transformed.