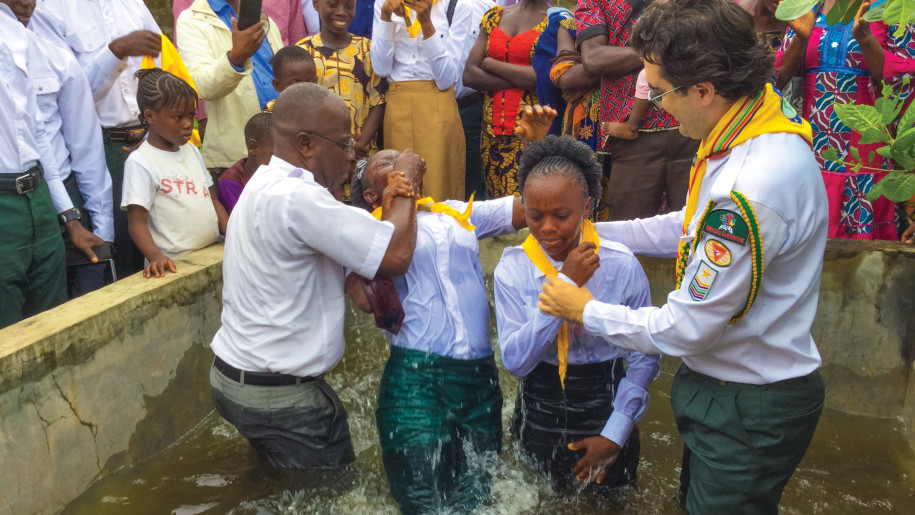 This story is about Ernestine, a young lady who has taught me what it means to be patient and to work for the desire that God places in our hearts. She has also been an answer to my prayers.

Ernestine was about three years old when we came to Fria. Her mother used to bring her and her older sister to our prayer meetings and Sabbath worships. They were among the first group of students in our school. As these children grew, I began to think about ways to keep them in the church. I was aware of the energy and dynamics that dedicated youth can bring into any organization, and I could imagine the future of the work in their hands. I began to pray for God’s direction.

In 2012 I had the opportunity to meet a young Guinean pastor who had just returned from our seminary in Cameroon and had experience with Adventist youth programs. I was desperately in need of someone to help with the church youth, so I asked permission from the Guinea Mission to allow the pastor to visit the church in Fria and help initiate our Pathfinder group. The president of the mission granted my request, and the program was a success. Every young person in our church group was interested in Pathfinders. However, since we did not have someone to continue leading the program, the youth soon began to lose interest. But Ernestine was always there, patient and persevering. She was not a Pathfinder leader back then, but she loved the program.

We encouraged several leaders from among the youth. Some started with zeal, but then their commitment faded. Some leaders would call meetings and then not show up. But Ernestine would be there and create some activity for the others who came. Sometimes she was the only one who would come.

One Sunday afternoon I was making a pastoral visit to Ernestine’s family. The Pathfinder leader had announced in church that all the youth should meet at our school at 8 a.m. that morning, so Ernestine had done all her Sunday-morning chores the night before. However, her parents didn’t want her to attend the meeting, so they gave her unusual chores the night before to prevent her from going the following morning. But Ernestine would not be discouraged. She did all the chores ahead of time without grumbling, determined that nothing would stop her from going to the Pathfinder meeting. Then her grandma said, “You really want to go to the Pathfinder meeting in the morning? Well, I forbid you.” Still, Ernestine sneaked out of the house in the morning and went to the meeting. Nobody else showed up. Sadly she went home knowing that punishment would be added to her disappointment. I intervened, and her punishment was reduced.

When we were in Berrien Springs for furlough, I bought a copy of the Pathfinder manual. When we returned to Guinea, I organized a program for them, hoping to regenerate excitement and commitment in the church youth. I projected a YouTube video of Pathfinder club activities. At the end of the program, Ernestine walked up to me and said, “Uncle, that is my dream. I want to wear that uniform more than anything. It will be one of the best things Jesus will do for me.” I told her that she should pray fervently for this, assuring her that Jesus would reward her faith. She replied, “If Jesus is Lord, and I believe He is, then He will do it, and that is the day I will give my life to Him in baptism. I have suffered a lot from my parents and friends for the Pathfinder club. I believe Jesus has seen my pain and desire, and He will surely hear my prayers.”
From that day on, I joined her in praying, and I asked the AFM office to find someone who would come and restart the Pathfinder club. Our youth department was inactive, and there was no youth activity going on. But Ernestine took the initiative and met with her friends every Sabbath evening. They played Bible games, and sometimes she organized them to clean the church yard. She even encouraged them to fast and pray for God to help them find a leader.

Then we received a call from the AFM home office that a Brazilian couple, Pastor Leandro and Haline Monteiro, were coming to help with our project. Pastor Leandro was a Master Guide. It was an answer to our prayers!

Soon after their arrival, I met with Leandro and Haline and shared my vision for the youth. They agreed, and Pastor Leandro organized a youth camp where he was able to train some leaders and start the Pathfinder club. News about our youth camp reached the mission in Conakry, and we had children arrive from all over the country. Three days before the end of the program, Ernestine and her friends were to be officially inducted into the Pathfinder club. My wife and I bought their uniforms, and everything was set.

The night before the inauguration Sabbath, as I was privately praying and thanking God for His miracle, the Holy Spirit impressed on my heart to tell Pastor Leandro to make an altar call.

The Pathfinder inauguration was a very big occasion. It was like a national youth day hosted by our little church group. Parents of the children who attended the camp were present. Even the mission president was there. After the inauguration ceremony, pastor Leandro made an altar call. Ernestine was the first to come forward. Our eyes met, and we both began to cry. God had done His part, and now Ernestine was doing hers. She was baptized that day in her new Pathfinder uniform. Her mother later told me that she didn’t take her uniform off until Sunday morning. Before Pastor Leandro returned to Brazil, he recommended that Ernestine take leadership of our Pathfinder club, the Sentinels.

Friends, as we wait for the glorious return of our Savior, we must be involved in the things that will hasten His coming. Our enemy wants His coming to take us by surprise. Do not be dismayed or discouraged. Stand firm and fix your eyes upon Jesus.