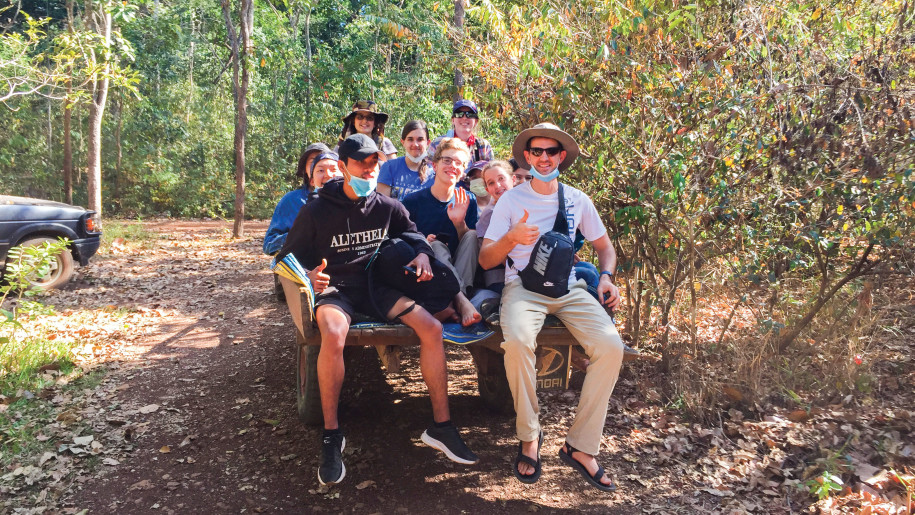 I twisted the throttle of the moto, picking up speed as a cloud of dust and sand billowed behind me. It was a lovely morning, but I knew it would be a race to accomplish my mission before nightfall. I needed to get the truck and bring it back to meet the rest of the group at the trailhead while they rode on a goyoon, a small tractor pulling a wagon. We needed to get out in the daylight because the truck’s headlights had stopped working on our drive into this forest sanctuary.

This trip was intended to be a fun and relaxing getaway with all the Cambodia student missionaries. We were having a wonderful time, but the stress of leading the group had been exhausting for me at some points. We had spent two nights in beautiful forest cabins and then two nights camping three hours away by goyoon.

The sun shone brightly overhead as I drove the moto as quickly and safely as possible. It was getting warmer with every passing minute. The trail wound back and forth and forked several times. I did my best to recall which trail we had taken on our way in, but I was starting to think that it might not have been a good idea to take this trip by myself. I brushed the thoughts away and drove a little faster.

The grass was tall, and the sand was deep in some places, which made staying upright on the moto extremely difficult. I fell over a few times and broke off one of the mirrors, but it only made me more determined to get back up and prove that I could get back on my own.

As I came over the top of a hill, farmland spread out before me. We hadn’t passed any farmland on our way in two days earlier, but I thought that maybe the trail would meet up with the road at some point, so I continued. After travelling for about 20 more minutes, I decided to turn around and try to find the group again so that I could follow them back to the truck. My wife’s words to me before I left were now ringing in my ears: “Don’t get lost, my love!”

Bearing down on the throttle, I tried to make up for lost time. I fell again in the sand, burning my ankle on the engine. But try as I might, I couldn’t seem to find the correct trail. I tried one more trail that looked promising, but it ended at an abandoned farmhouse. I was lost, hurt and scared. I stopped the moto in a grassy meadow and cried out to God in my desperation, “God, I need Your help!” I decided to trust in His power instead of my own to find my way. An unexplainable peace came over me as I started back down the trail. As I drove, suddenly I noticed fresh tracks from a goyoon! I followed them down the winding trail, and they led me all the way back, past all my wrong turns, on the right path to get back home. As I drove, I joyfully sang the hymn “Under His Wings” until I safely arrived back with the group.

God wants us to dwell in safety under His wings, not just in difficult times or when we are doing evangelism, but also in times of rest and enjoyment. I thought that my biggest God moments during my student-missionary year would come during direct ministry to the unreached, but God shows up whenever we call on Him.