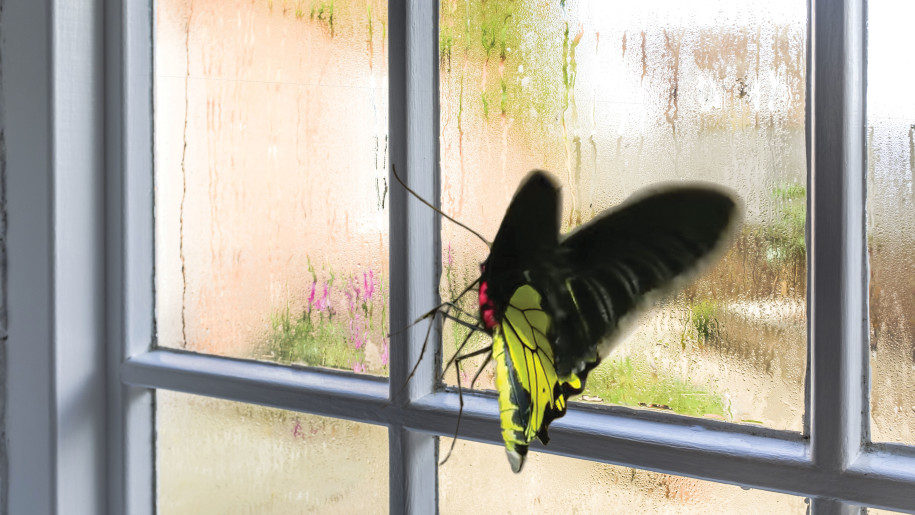 “And WHAT exactly is that?” someone asked.

I was lifting weights in our village gym the other day while listening to some beautiful new worship songs that led me to contemplate how God’s goodness and grace saves us and holds us fast. This meditation also helps me better communicate that to our Thai friends and church members.

Suddenly, I heard behind me a very rapid and not-so-soft clicking or almost rattling sound. My first thought was that it was the sound of a bird’s wings flapping. But it was NOT a bird. Turning around I discovered that the sound was coming from a mysterious, large and mostly black member of the papilionoidea superfamily. “And WHAT exactly is that?” someone asked. If, like most people, you have no idea, then let’s just call it that: a “papilio-no-idea” or easier still, a “papi.” Later you can just ask Google.

Anyway, this big Thai papi had somehow gotten into the gym and was now desperately trying to break through its large glass wall to get to the other side where I could see there was a large swimming pool and a nicely cut lawn neatly hedged-in by bushes and palm trees and a beautiful lake under a bright blue and partly cloudy sky. The view through the glass was beautiful and relaxing.

To me, it was incredibly inviting! But to that big papi, the outdoors was beyond inviting. The papi had zero desire to stay trapped inside that relatively dim and stuffy gym one second longer. It was frantically doing everything that it could to bust out. I understood what, in that moment, the papi could not — that all of the time and energy it spent crashing into that thick glass would be fruitless and, at best, most likely harmful and possibly even deadly. I felt sorry for the pitiful papi, and I wanted to help it recover its freedom to eat and cruise about having fun like all papis do in the great outdoors. But as I drew near to help it, the poor papi panicked. Again and again it dodged and resisted my unwelcomed and mistrusted brushing movements, because that papilio-no-idea-n creature had NO idea what my intentions were. To the big papi, all that I was trying to do for it seemed just wrong and even dangerous! After all, was I not trying to physically move it back away from the glass wall and, by extension, from everything that it desired at the time? Was I not big enough to crush it and eat it, if I so desired? It appeared to fear as much!

Finally, after several clumsy attempts, I succeeded in trapping the frightened “papi” in the lower corner of the glass. Then with both hands I gently clamped down on the stiffest edges of its two large forewings. Slowly carrying it toward the apparently forgotten door through which it had so recently flown into the gym, I was impressed by the power that I felt in its palpitating papi wings as it strained again and again to free itself from my grasp. But for its sake, I didn’t let go. If it had only known my heart and intentions toward it were good, it might have relaxed and had peace in my hands, rather than stressing and fighting.

Sadly, that poor papi is not much different than so many of us who also fear — fear to entrust our lives fully into God’s gentle yet powerful hands — not realizing just how truly and completely God is FOR us, and not against us (Rom. 8:31); not immediately perceiving that all the inconveniences and apparent setbacks are actually working together to move us farther away from a dead-end existence and closer to that eternal outdoor freedom of joy and peace (Rom. 8:28). May God help us and our Thai friends to humbly trust His heart, even when we can’t trace His hand, and believe that His plans are really “to prosper us and not to harm us” (Jer. 29:11). Then as He guides us, we have peace and rest in His strong hands even now with praise on our lips (Isa. 57:18,19) until that day when we actually fly away like a happy papi!