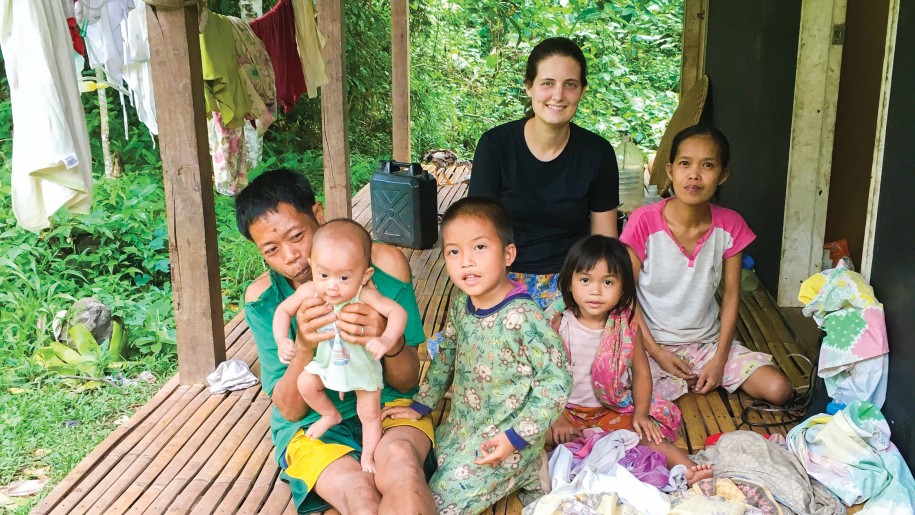 Part I: When Pastor Oumar returned to town, Fred was worried. Formerly a minister in another denomination, Pastor Oumar had been a bitter opponent of the Adventist Church. But when Fred learned that Pastor Oumar’s wife was suffering from demon possession, he saw an opportunity to help.

In the afternoon of the second day, Isatta and I decided to visit Pastor Oumar and his wife. It was an unusually cool, foggy day, and the air was full of dust from the Harmattan. At an intersection, we saw Pastor Oumar walking toward us. As we drew nearer, I greeted him. “It’s cold and windy today!”
“And dusty, too!” my wife added.

Ignoring our comment on the weather, Pastor Oumar said, “Please come with me to my house. I want to talk.”

As we entered the courtyard, we were greeted by the screams of a terrified baby. My wife left the two of us behind and dashed into the house like a lioness running to save her cubs. Finding Pastor Oumar’s wife bathing her baby in cold water, my wife took the child from her and covered her in a thin towel, the only wrap available. The pastor took his wife by her arm and conducted her to their bedroom. I followed them, worried that he might beat her. As he closed the door, I caught a glimpse of the only furnishings in the room—a few rags on the tile floor to serve as a mattress. My heart skipped a beat. This family clearly was in great need.

Pastor Oumar came out of the bedroom, and we returned to the living room where Isatta sat cuddling the baby girl, who was now fast asleep. Gazing at his child in my wife’s arms, Pastor Oumar sat in silence for about five minutes as if mentally rehearsing what he was going to say. He finally took a deep breath and said, “Let us pray.” As we bowed our heads and he began to pray, he broke down in tears. I took up the prayer and finished it. Then Isatta and I tried to console him. As we spoke, I took in the room. It was dirty, and his children’s clothes needed to be laundered. It was evident that my friend needed help.

Before my recent encounter with Pastor Oumar, I had been praying that God would show me ways to involve our entire church group—adults, children and visitors—in reaching out to their neighbors. Then God sent me an object lesson.

One Friday evening, I was sitting on our porch enjoying the sunset and eating a gluten sandwich my daughter Patricia had made for me. As I was taking a bite, a piece of gluten fell to the dirt. A short time later, I glanced at the piece again and noticed three ants trying to drag it, though it weighed hundreds of times as much as they did. As I continued to watch their struggle, more and more of their sisters joined them until I finally lost count. Together, they got their prize moving toward their nest. It was amazing to see the cooperation of these tiny insects. It took one ant to make the discovery and hundreds more to bring it home.

In that moment, it was as if the Holy Spirit began speaking to my heart: That piece of gluten is Pastor Oumar. He is bigger than you think, and I want him in My church for the benefit of the work among the Muslims in Guinea.

But this guy is more educated than I am! I argued back in my mind. He is a Christian pastor. He knows about the Sabbath. What Bible study could I possibly give him that he will not take over and begin to teach me?

Use the gifts you have, the things you do well, the Spirit seemed to say. And don’t try to do it alone. Use every resource you have. You have prayed for a way to include the entire church group in ministry. Now is your opportunity.

I went to my knees and thanked God for speaking to me. In tears, I vowed to do whatever it would take to reach out to Pastor Oumar and his wife.
Excitedly, I shouted my wife’s name. She came dashing out onto the porch, wondering what was wrong. Brimming with joy, I told her about my experience of the last few minutes and what the Spirit had told me. “Let’s mobilize the church in ministering to this family!”

That evening at the Friday vespers service, Isatta and I shared our plans with the group. Isatta told them that she would not be at church the next morning because she would be serving this family. Several other women decided to join her. She invited them to our house in the morning for a short meeting to plan and assign tasks.

Early Sabbath morning, I heard a knock on our gate and opened it to find six church ladies carrying tools and supplies. It reminded me of times when village women gather to fish. Indeed, these ladies were going to fish—for pastor Oumar and his family.

The ladies gathered on our living room floor around Isatta. Like a battle commander, she conferred with the ladies as she wrote out a list of tasks in order of priority and divided everyone into teams. Some ladies would clean the house. Others would to do the laundry. Still others would go to the market for food and cook for the family. Several of the ladies had brought food items and laundry soap. It was beautiful to see the church at work, engaged in practical Christianity.

When the ladies arrived at Pastor Oumar’s house, he was not there. We found out later that he had gone to ask his former church members to help his family with the very things our ladies had come to do! However, every one of his former members gave him an excuse or promised to come but didn’t show up. By the time he sadly returned home, our ladies had washed all his family’s laundry, scrubbed his house and were busy cooking a large meal. Isatta told me that when Pastor Oumar came into the house, he was so overcome with surprise and gratitude that he burst into tears and cried for more than 20 minutes. She told everyone to let him cry. She took the baby and the other children to our house where she bathed them and gave them breakfast. With full bellies for the first time in many days, they all soon fell asleep.

I have studied many methods of evangelism and practiced quite a number of them. Some of them seem to produce positive results in the beginning, but in the end they prove worse than worthless. It seems to me that the key to evangelistic success often lies in how we answer this question: are we working for God or with God? When we think of ourselves as working for God, we have a tendency to lay our own plans, trying to do God’s work for Him and forgetting that we are mere instruments in His hands. Whenever we see some success with this approach, we are tempted to think it resulted from our own wisdom and work.

But the story of Pastor Oumar reminds me that the best thing we can do is stop and listen to the Holy Spirit’s still, small voice and follow Him as He leads. The pen of inspiration wrote: “Hearts that respond to the influence of the Holy Spirit are the channels through which God’s blessing flows” (The Desire of Ages, p. 306). “Christ’s method alone will give true success in reaching the people. The Savior mingled with men as one who desired their good. He showed His sympathy for them, ministered to their needs, and won their confidence. Then He bade them, ‘Follow Me.’ There is need of coming close to the people by personal effort. If less time were given to sermonizing, and more time were spent in personal ministry, greater results would be seen. The poor are to be relieved, the sick cared for, the sorrowing and the bereaved comforted, the ignorant instructed, the inexperienced counseled. We are to weep with those that weep and rejoice with those that rejoice. Accompanied by the power of persuasion, the power of prayer, the power of the love of God, this work will not, cannot, be without fruit” (The Ministry of Healing, p. 143).

The following Sabbath, without any invitation, Pastor Oumar and his children were the first to arrive at our church. The entire church got involved in reaching out to this family. Church kids in our neighborhood began to visit Pastor Oumar’s kids.

Things began to change at Pastor Oumar’s house. His wife’s condition began to improve, and she testified to Isatta that God had delivered and healed her.

God is mighty, and we praise Him for His power at work in the hearts of Pastor Oumar, his wife and children, and in our church!

My grandfather have p*****ed away and he have always taught me on how to fish. But now since he is gone, the platform of the CHF Fishing Guide Venice have guided me completely. It was really helpful and informative honestly. Highly recommended.