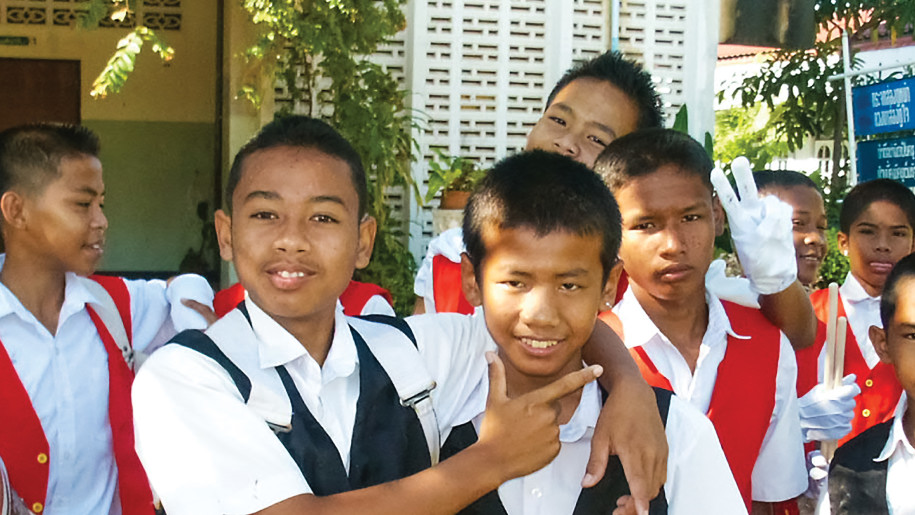 Some time ago, I had a very violent, disturbing dream. I awoke from the dream with a racing heart, wondering if I was being harassed by an evil angel. Where might such a horrible dream come from? I prayed fervently, feeling the weight of the world’s increasing evilness. I reached for my phone wanting to read a comforting passage from my Bible app. Then I noticed an instant message that had arrived earlier at 12:30 a.m. from a friend in Bangkok who was asking for prayers for his nephew, Bank, who was in the emergency room.

Earlier that day, Bank had been sitting outside in his school commons area with a friend. His friend went to use the restroom, leaving Bank alone reading something on his phone. All of a sudden, a gang of 10 upperclassmen surrounded Bank. Without saying a word, three of them began to punch and kick him. They beat him mercilessly, crushing his nose and continuing to kick him as he lay crumpled on the ground. The beating continued for a couple minutes until Bank’s friend came running to aid, and the other boys scattered.

Bank’s friend helped him to his feet, but he was too dizzy to walk by himself. He had lost a lot of blood. After being quickly seen by the school nurse and the associate school director, Bank was taken to a local private hospital where surgery was quickly done to reconstruct his nose. Meanwhile Bank’s parents and relatives, and later even I myself, were left wondering, what is it that could possess and lead ten 17-year-old boys to do such a horrific act as this—to literally watch for the chance to beat up someone who is completely defenseless and minding his own business?

As I read the message on my phone the question came strongly to my mind, “Is God already beginning to withdraw His Spirit from the earth?” “Is Satan now being given more freedom to mess with people’s minds and stir up violence than ever before?” “Are God’s angels already letting loose the four winds of strife?” To me on that night, it certainly seemed like it, especially when on top of it all, I considered the increasing strife and suffering that we all see in the news lately.

I have since read that sometime before 1901, Ellen G. White penned this: “The restraining Spirit of God is even now being withdrawn from the world. Hurricanes, storms, tempests, fire and flood, disasters by sea and land, follow each other in quick succession.” Reading this reminds me of CNN headlines I’ve read this week! EGW continues: “Science seeks to explain all these. The signs thickening around us, telling of the near approach of the Son of God, are attributed to any other than the true cause. Men cannot discern the sentinel angels restraining the four winds that they shall not blow until the servants of God are sealed; but when God shall bid His angels loose the winds, there will be such a scene of strife as no pen can picture.” {6T 408.1}

So, it appears that God’s Spirit has been ever-so-slowly withdrawing from the earth (for at least more than a century already). Amazing—the patience and restraint of God! And I wonder, how much worse can it get? Apparently, so much more that “no pen” will be able to “picture” it. So in light of this, what are we to think? What are we to do? I am inspired and challenged by what EGW writes in the same chapter where she says, “It cannot now be said by the Lord’s servants, as it was by the prophet Daniel: “The time appointed was long.” Daniel 10:1. It is now but a short time till the witnesses for God will have done their work in preparing the way of the Lord. We are to throw aside our narrow, selfish plans, remembering that we have a work of the largest magnitude and highest importance. In doing this work we are sounding the first, second, and third angel’s messages, and are thus being prepared for the coming of that other angel from heaven who is to lighten the earth with his glory.” {6T 406.4, 5} May we always realize the time of day, and press on in God’s work!

The next day, Pastor Apisit, Kyle Tumberg, and I paid Bank and his family a visit to encourage and pray for them. There we heard the whole story in greater detail. It turns out that a relative of theirs had just gone to visit a fortune teller a couple days prior the incident who had predicted trouble for Bank’s family! His prediction was that in the next few days something would happen that would cause Bank’s father to have to spend the night in the hospital. Exactly what would happen was not told him. But then as Bank’s father spent the night with his son in the hospital, he remembered the fortune teller’s prediction. What could he have done to avoid this? Bank’s father and mother asked us, “What do Christians do when dangerous predictions like this are made?” We told him that first of all, we don’t go to fortune tellers, because God said not to. Also it has appeared that again and again those who do go to consult with these people (and the spirits with whom they communicate) are only opening themselves up to Satan’s destructive power. If, on the other hand, someone else goes to consult a medium in regard to us (and we ourselves have not asked them to do this), and they are told that some bad thing will happen to us, we can of course ask for prayer from fellow believers that God would frustrate any workings of Satan in relation to those predictions, and then just trust that God himself will protect us according to His power and will for our lives. “Aww, that’s what we should do!” Bank’s father replied. He and his family were encouraged as we prayed for them! And the next Sabbath, the whole family, even Bank, was in church! Please keep Bank and his family in your prayers as they are still coming to faith in Jesus.

In many ways, we see that world is falling more and more under the control of the Enemy of God, and we know that it is going to get even worse before God ultimately makes it better. Yet we praise God that, over and above it all, He is still watching over his children, protecting them and strengthening them to serve Him as His work draws ever nearer to its close! Let’s hold on, and stay faithful, for till that day, “it is now but a short time!”

Blessings from the home team!