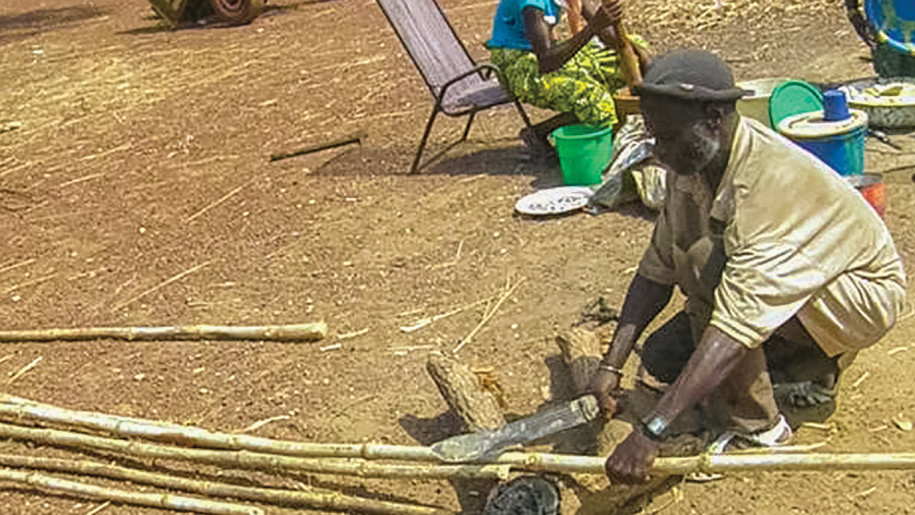 The security guard at the Susu Project has worked there for more than 20 years. He is very faithful and hardworking. One day he mentioned to me that the rainy season was coming and he would like to put a new roof on the guard house. There wasn’t a budget for it at the time, but money eventually became available, and I gave it to him when I returned briefly to Guinea from the States. He quickly got to work and finished the roof before the rains came.

He sent me some pictures of the building process. It was amazing to see. First they gathered roofing materials. In Guinea, this is traditionally dry grass, locally made rope and bamboo. They arranged the dry grass on the ground and wove it with rope so the stalks were pressed tightly together, and rain could not penetrate. The rope they use is dry, but when it is moistened it becomes soft and flexible again. They arranged a pyramid of four bamboo poles tied together as the rafters for the roof. They also measured and cut several medium-size bamboo poles and tied them to triangulate the rafters and give of the roof shape and rigidity. Then they laid thick layers of the dried grass thatching over the framework and tied them on with ropes. After putting the first and second layers on the roof, they lift it up and put it on top of the building, positioning it carefully. Then they added a final layer of bamboo.

God wants to build a spiritual kingdom among the Malinke people, which involves winning souls for Him. We can build His kingdom by meeting the needs of people around us, either directly or indirectly.

In Luke 6:47, 48, Jesus says that anyone who hears His words and does them is like a man who, when building his house, digs his foundation deeply and sets it upon a rock. When a flood comes, the house remains intact on its secure base. In Jesus’ parable, the house can be seen as a metaphor for character. Every thought is like a piece of timber in the house, every habit a beam, every imagination a window, well or badly placed. Together, the ingredients form a strong, beautiful house or an ugly, weak one. We decide how our house is constructed.

In building God’s kingdom, we need to be kingdom-minded people. When we trust men, they will be true to us. When we treat them gently, they will respond in kind. We are trusting in God to work in their hearts. How is God impressing your heart to build His kingdom in those around you?

Praying for you, Uncle George and Auntie Theresa!  May God strengthen your witness and guide your mission!