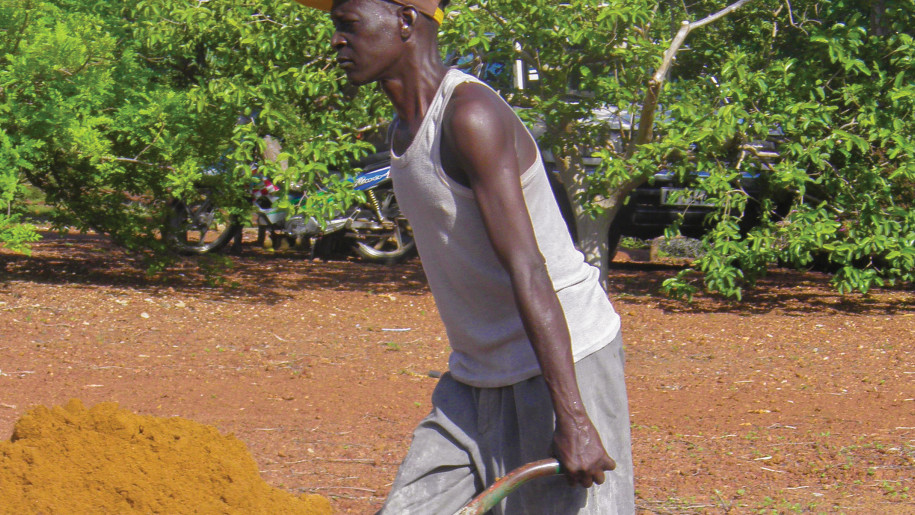 To love what you do and feel that it matters—how could anything be more rewarding?

Boukari is a father of three children and the eldest son in his family, a position of honor. However, he gave up that honor when he accepted Jesus as his Lord and Savior.

Years ago, AFM’s first Mali missionaries—the Polley­ family­—met Boukari. At the time, he was a primary school teacher working for the government. The Polleys befriended Boukari and witnessed to him, and by the grace of God he abandoned his Muslim faith and became a Christian. Boukari and his wife were among the first to be baptized and married in the Kangaba worship group.

When a West African Muslim accepts Christianity, it often means losing the support of family, relatives and friends. Boukari’s loved ones and friends turned their backs on him. He lost his job, and life became miserable for him. When the Polley family left Mali and returned to the States, Boukari decided to abandon Christianity and return to Islam. To make a living, he became an apprentice brick mason and house builder, earning a daily wage of 1,000 CFA (US$1.69).

The Bible says that even though family and friends forsake you, God never will. When we arrived in Mali, we went to meet Boukari. We tried to encourage him to return to Christ, but he expressed deep disappointment in Christianity, which he felt had deceived him. We prayed for him that God would speak to him or give him a dream about Jesus to draw him back to the faith.

One Sabbath morning he showed up for worship. We continue to pray and visit him often, and he agreed to study the Bible with us. We studied together three times a week. Hope began to return to his life, and we noticed changes starting to take place. Boukari was a smoker and chewed kola nut, so I gave him the health message and prepared a stop-smoking program for him. Giving up these habits was a difficult struggle for him, but with much prayer and the power of the Holy Spirit he was soon free of his addictions.

My wife is a very generous woman and loves to help people with food products and other items. She and I prayed together about how to help Boukari’s situation, and God gave us the idea to teach him how to make bricks. With my knowledge in building and construction, we are now helping him to make bricks so that he can be self-sufficient. Every Sunday morning he comes to our house, and we work four to six hours making bricks. We taught him the promise outlined in Psalm 128:2: “You will eat the fruit of your labor; blessings and prosperity will be yours.”

Boukari is beginning to experience happiness in his family, and despite pressure to return to Islam, he has been faithful to God. Every Sabbath he, his wife and his children are the first to arrive at our house for worship. He is very happy to be free from his tobacco and kola-nut addictions, and he praises the Lord. He is now helping others with the health message.

Please pray that Boukari will continue shining his light in his community and that through him his extended family will come to know the God he loves.