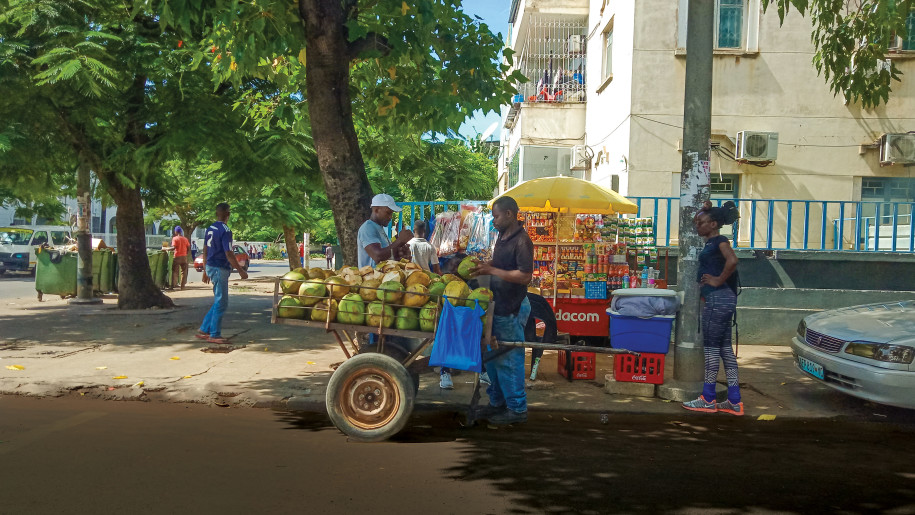 Our house is located within a community of walls in the city of Maxixe. We are struggling to get to know our neighbors because of all the tall walls surrounding our neighbor’s homes. When we walk the sandy streets, sometimes we get a glimpse through an open gate, but the lifestyle and identity of most of our neighbors continues to be a mystery to us. Please don’t jump to unfair conclusions. The people here are very friendly and greet us warmly as we pass on the street. But opportunities to go inside their walls and develop deeper relationships are proving elusive.

Downtown a few blocks away, the streets are lined with little shops selling all kinds of stuff. Women carry buckets full of cashew nuts, seafood or vegetables on their heads. Boys and young men carry knick-knacks and snacks for sale. Men wheel carts full of pineapples. Smiling policemen and policewomen in colorful uniforms patrol the streets carrying AK-47 machine guns. Disabled people spend their days seeking charity from passersby. There is commerce happening everywhere. People spend all day, every day, in the street markets selling a little so they can eat a little. So it appears that the place to meet people is on the streets.

With this idea in mind, Edie decided to walk our street and meet the merchants in our neighborhood. She stopped to chat with an elderly lady sitting on a woven mat in the shade outside her gate selling boiled eggs and fried dough. The woman said her name is Marianne, and she moved to Maxixe 40 years ago from the northern part of Mozambique. She is now a widow. After they talked about the lack of rain and how hot it was, Edie started asking her about our neighborhood. She pointed to a church next to where they were sitting, and Marianne said that it is the Church of the Apostles. Their members wear white hats on Sunday.

Marianne told Edie that she is a Muslim, and her house is across the street from ours. “But my knees hurt too much for me to live alone,” she said, “so now I live with my daughter who owns the house behind me.”

Marianne’s grandson came out and offered Edie a chair. A few minutes later they were joined by Marianne’s daughter Ana who is also Muslim. As the three of them sat in the shade and chatted about Mozambique history and food, Edie began to feel accepted. A few minutes later, Ana purchased a coconut from a passing street vendor and gave it to Edie. What hospitality!

There are four mosques in our neighborhood, and we occasionally see men walking the streets in long white robes followed closely by their wives in colorful hijabs that cover all but their faces. We are very familiar with the Muslim prayers, because our home is six blocks from a Mosque with large speakers. The call to prayer is sounded five times per day—before dawn, noon, mid-afternoon, sunset, and night. We are often roused from sleep before 4 a.m. by the loud musical chant.

As Edie continued visiting in the shade, Marianne’s eldest grandson came home wearing the long white Muslim robe. Edie learned that he is a teacher in a madrasa. After school each day, Muslim students go to madrasas to learn the Islamic religion. Soon the grandson changed his clothes and headed back to town. Now we understand that Muslims don’t wear their distinctive outfits all the time. This explains why Marianne and her daughter were not wearing hijabs as Edie talked with them.

Edie asked Marianne how to cook native Mozambican vegetarian food. Marianne gave her the recipe for matapa, which is made from cassava leaves mashed with peanuts and scraped coconut. It is delicious! When Edie commented that she didn’t have a coconut scraper, Ana volunteered to take her shopping to get one along with the ingredients for matapa. As a gift, Ana gave Edie a woven mat to sit on. She even sent her nephew to carry the rolled-up mat back to our house. Ana has invited Edie to come back and visit.

We are excited to see how God will grow our friendships with our Muslim neighbors.