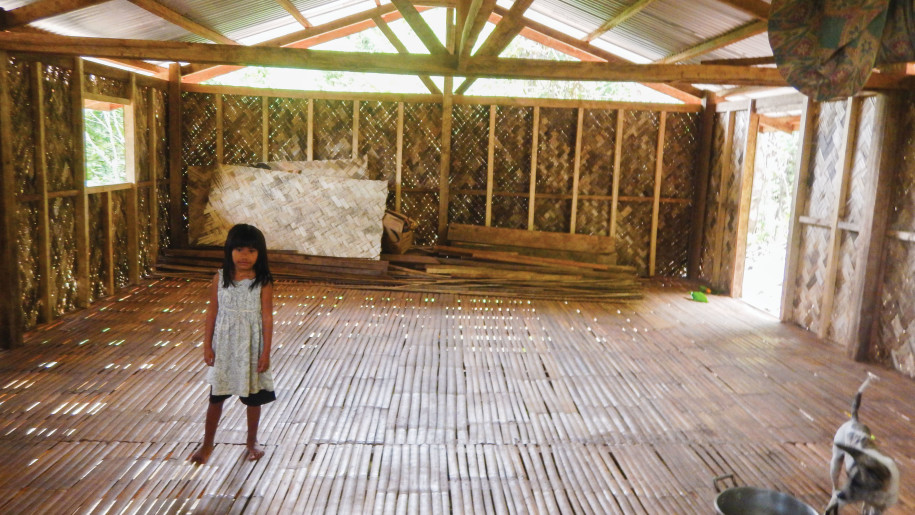 Approaching the high peak enshrouded in fog, we held our breath. Would there be a break in the clouds to allow us to pop over the ridge? I prayed, “Dear Lord. You know how expensive it is to fly in a helicopter these days. And here we are within five minutes of Mermá by air if we can get over the ridge. May Your will be done.”

And just then, a window opened up, and we clearly saw the route to take down to the next village. We were arriving with missionary care packages for our daughter Jilin, her family, and the new student missionary, Thamara, from Brazil, who was staying in the area and taking a crash course in language and culture.
We were late for their church service and meal, but when they heard the helicopter, they gathered at the end of the runway. Jilin jumped up and down. It has been quite a while since we had been to Mermá, and so much has changed since then. The people are very comfortable with us now, and the school building is enclosed. The staff house is now livable, and it has a million-dollar view of the jungle cliffs on one side, the river valley below and the ocean and islands in the distance. Everything is so much better than 10 months ago, when we left to visit the United States. At that time, Jilin’s family and the school operated out of jungle-built, tarp-covered houses.

As Usi gave us a grand tour of the school and the staff house they have built, I sensed the pride and sense of ownership that he and other people have. He also wanted to ensure we saw the landing strip (we could not miss it since we had just landed on it) that so many people had invested months of hard labor to produce. Why have they invested themselves so greatly? Because they are thrilled to have missionaries living in their midst, they want their children to learn to read and write, and they want to learn about Jesus.

The people are changing. In the beginning, some people threatened Jilin and her husband, Junie, with death because they were unhappy that there was a school there. They did not want to learn about Jesus; they wanted to cling to the old ways. But now, the very man who instigated all the threats has been instrumental in cutting wood for the school (which will also be a church) and apologizing for the bad things he said about them in the beginning. The Holy Spirit is working, and we are thrilled to welcome you to be a part of this work—entering new areas, pushing back the darkness and bringing healing to brokenness.

A new day is dawning. A window is opening. Some of the Palawano people are venturing out of their comfort zone to take the gospel to Palawano in other villages they do not know and who do not trust them—people who may even suspect them of evil-doing. They are going to places where they own no property to make their rice fields. These are significant issues for a Palawano. We pray there will be many more followers like them.

Please pray that the Lord will continue to protect and guide Jilin and Junie, giving them courage, wisdom and the strength to carry on this massive work of opening up a new area for Jesus.