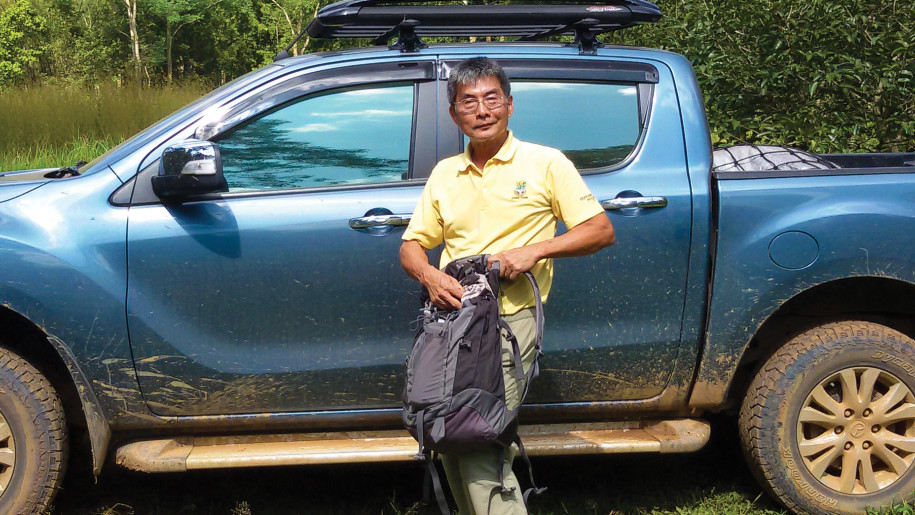 It was a little after 5 a.m. when my alarm went off. “Ugh. I’m so tired! Do I really want to see the sunrise?” Every lazy bone in me screamed, “Who cares about the sunrise?” But my curiosity, not to mention my sense of honor, screamed even louder, “You already hired someone to take you up there, and he’s no doubt already on his way here! So get up and go see that amazing sunrise that the locals are raving about!”

So my wife Shannon and I helped Alina and Jeshua get up and get dressed. And soon we were climbing into the back of our hired driver’s white Toyota Vigo 4×4 truck. Our ride to the top of what the locals call Headless Mountain began normally enough. But as soon we got out of town, the truck’s left front wheel began to make knocking sounds. “What’s that?” I wondered. I rapped on the glass of the back window to get the driver to stop the truck. Jumping out of the bed, I went around to inspect the wheel. But for all its noise, nothing appeared to be wrong with it. The tire was still fully inflated and in good condition. I ran alongside the truck while the driver rolled along slowly, looking for clues as to the cause of the knocking, but there was nothing visibly wrong. “Let’s just keep going! I drive slow,” the driver said. So, with a prayer for protection, I climbed back into the truck, and we continued to drive up the mountain road, not wanting to miss the event for which we had just deprived ourselves of pleasant sleep. The knocking continued the whole way to the top. But the view of the sunrise over the sea of clouds below us was indeed spectacular and worth the whole noisy trip!
There on the summit we met a kind retired professor of botany named Ying Yong. He told us he was sponsoring the education of some low-income students in the area, and he was up here visiting some of them. As I chatted with him, my respect for him and his charity work grew. When he asked how we had come there that morning, I told him about our hired truck. I mentioned the weird knocking noise and half-jokingly said, “Maybe we should ride back down the mountain with you.” I didn’t want to impose on this stranger, kind as he appeared to be, nor did I want to ditch our kind driver, so Professor Ying Yong and I parted ways, and he began driving slowly down the mountain.

Still something in me wanted to spend more time with Prof. Ying Yong, and I began to really wish that we could ride down the mountain in his truck. As our truck began the steep and winding descent toward the valley, the knocking began immediately. I asked the driver to please allow Shannon and Alina to sit up front in the cab where there were seatbelts while Jeshua and I remained in the back of the truck. I was imagining that noisy wheel flying off, and our truck cartwheeling off the road. I had recently heard of another Adventist family whose car had rolled into the woods, killing both parents and two of their three kids. “Dear God,” I prayed, “if it is Your will that we go down the mountain in Professor Ying Yong’s truck, please get him to make that offer.”

Suddenly, I saw his truck slow down, and our driver passed him. But the professor didn’t shout any offers at us as we rolled past. He appeared to be just taking pictures of something through his side window. Then he continued to follow along at a polite distance behind our noisy, knocking truck.

Then another thought came to me: “Chris, you don’t need to sit passively waiting for him to offer. If you sense danger, then you need to act! You can ask!”

I hesitated a moment, arguing in my mind that perhaps there was no real danger. “What should I do, God?” I prayed again. The conviction and urgency grew stronger. “Do it! Get out of the bed of this truck!” So I tapped on the glass again, and our driver stopped and looked at me questioningly. Not wanting to appear overanxious, I just told him I wanted to talk with the man in the truck behind us, which of course was true.

I got out and waved down Professor Ying Yong, and he stopped and rolled down his window. “Could we ride with you the rest of the way down the mountain?” I asked. “I’m really not comfortable in the back of that truck.”

“Sure,” the professor replied. “Just let me rearrange some things to make room.” He moved a backpack and some other stuff from the front passenger seat to the back seat, and Jeshua and I climbed gratefully into his truck and fastened our seatbelts. Feeling much safer, yet still concerned for Shannon and Alina and the other driver, we followed closely behind their white truck for about a kilometer.

Suddenly I noticed something shiny rolling on the road behind their truck “What was that?” I asked as we drove over it. “Stop the truck! We just ran over something!” Professor Ying Yong honked his horn to signal the other driver to stop as I jumped out and began scanning the road behind us for the small silver object I had glimpsed. There it was, a shiny silver lug nut with a broken wheel stud still inside it! “Oh my!” I said to myself as I picked it up and ran back down the hill. Now I knew what was happening.

I ran up to our hired truck and inspected the left front wheel. Sure enough, it was now missing a stud and lug nut! Stooping down, I examined the remaining lug nuts. Two of them were so loose I could turn them easily with my fingers. “This just broke off of your wheel,” I told the driver, holding up the broken piece, “and you’re about to lose two more. Do you have a lug nut wrench?”

The driver shook his head. “No. But I’ll call my boss and get someone up here who can help.” “That’s fine,” I replied, “but my family is going to go ahead back to the resort in our friend’s truck. We will see you down there.”
“Okay. That’s fine,” replied the driver.

And so our new friend, Professor Ying Yong, again reorganized his stuff to make room for two more people in his wonderfully quiet-riding truck. Thank You, God, for this human angel, Professor Ying Yong, I silently prayed. And thank You for impressing me to get out of that noisy truck just in time to see the broken lug nut rolling down the road! Thank You that we’re all safe and sound.

And thank you dear readers for your unfailing prayers, interest, and support for us and our ministry to the people of Thailand. I believe that many of God’s blessings, including strong impressions, come to us in part because people like you are faithfully praying for our protection and success. Please keep praying!