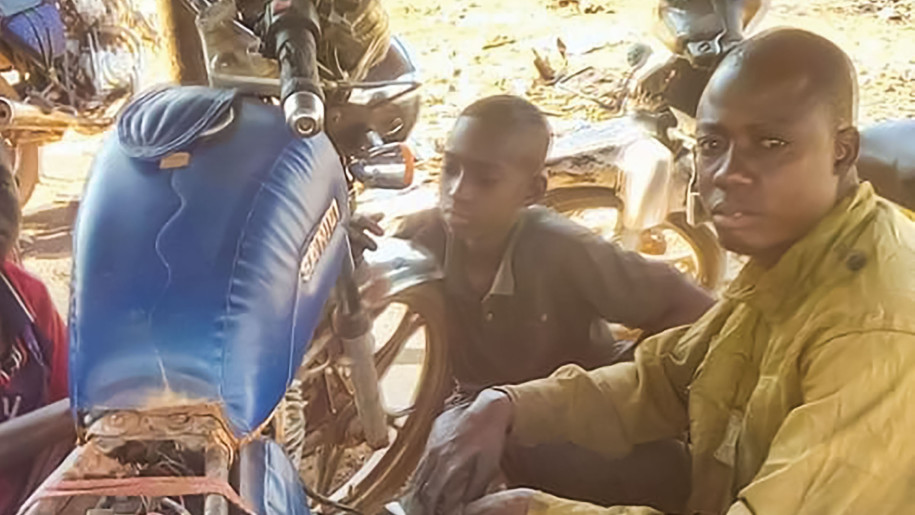 One day I went to my mechanic to have my motorcycle repaired. I met a young man at the mechanic’s shop who was getting his motorcycle repaired, too. His name was Nama. We talked a lot about the present situation in our region. Though we had never met, it turned out that we had been in the same area of Conakry, Guinea, during the same time period.

When the mechanic finished repairing Nama’s motorcycle, he asked him to pay 5,000 CFA francs, equivalent to about $10. Nama had only 2,000 CFA francs with him, so I contributed the remainder. He thanked me and said he would never forget my kindness. I told him I was happy to do this small thing. “You may think it’s small,” he said, “but it’s not the amount that’s important, but the deed.” We exchanged phone numbers, and Nama left.

Sometime later, we decided to reach out to Bancoumana, the city where Nama lives. I called his number and asked if he remembered the man who had helped pay for his motorcycle repair. “Yes!” he said. I told him we would be doing outreach in his community, and he directed us to his house. When we arrived, he welcomed us and introduced us to a friend named Siné Camara. Siné become one of our close contacts. Every Tuesday and Thursday, we visit Bancoumana for evangelism. Nama has become our person of influence in Bancoumana, and he has helped us make many contacts there.

One morning at about 5 a.m. Nama called me to announce the death of his mother. I decided to take the team to Nama’s place to present our condolences. We took a bag of rice and 10,000 CFA francs ($20 US dollars) as our contribution to the family’s funeral expenses. These acts of love further strengthened our bond and collaboration.

As we continued to visit our friend Nama, he started to open up. He talked with me about people who claim to be Muslim, but their lives are contrary to what they preach. The Muslim religion was no longer credible to him. He went on to say that this is a conviction that has been growing in him for a long time. He had lost hope in Islam because it offered no hope of salvation. “I want to change my religion,” he said, “but I am afraid. My family will reject me if I leave Islam.” He wanted to leave his family and go far away to practice Christianity.

Brother Yaya, one of our new converts, shared his testimony with Nama and encouraged him to be strong. Nama is now studying the Bible with Brother Yaya, and he is struggling to make a decision.

Please stop and pray for Nama and the many Malinke people who are frustrated with Islam. Pray that they can overcome the fear that prevents them from seeking eternal life.