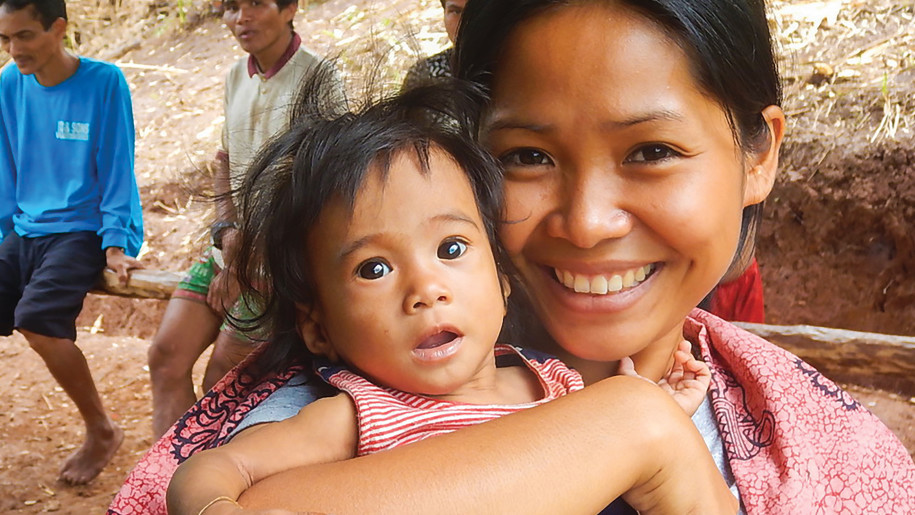 Amidst the grand mountains of southern Palawan cling many tiny villages. Some strut across a flat-top mountain under which a magnificent waterfall flows; some perch on the edge of mountain peaks; others hunker down near the river’s edge. Marmá is a village that gingerly sits on a ridge of land — one of many coming off a larger mountain. Here the village overlooks the sea and several bays stretching south towards Borneo. Villagers survive by “hunting and gathering,” living mainly off what the jungle produces. Cassava, malanga and sweet potatoes are the mainstay of their diet. They live a seven-hour hike down a swift running river from the nearest town, though from their perch they can see the lights of two or three towns along the coast below. They have no healthcare, no schools and no churches. Nonetheless, they are people with big hearts and bigger vision. Though these villages are separated from each other by dense virgin jungle and steep trails, they all share the same desire: “Education for our children — and healthcare, if you please.”

Previously, we have responded to word of someone in dire need of emergency transport from the area, but we had not considered this place a candidate for a new mission center, until Saduk came to visit.

Saduk has visited the clinic several times, hiking ten hours or more along treacherously steep mountain trails. Recently he came to me and requested that we provide a teacher and a nurse in his village. When I mentioned that we were short of teachers and nurses, it didn’t seem to deter him and he said, “We will build a school and a house for a teacher. Please send someone.” A few weeks later, he informed us that a temporary school had been built, with room above the classroom for the teacher to live while a permanent school and house were built. I was impressed by how earnest the people were. We started praying specifically for Marmá and for someone willing to live amongst them. During the two months of specific prayers, groups from the Kemantian church began hiking over the mountain to spend a weekend. They began the work of opening hearts to the gospel [see Carrie Hann’s May article Willing to Risk?]. At that time, our young daughter Jilin and her husband Junie came forward saying, “We are impressed that we are supposed to go to Marmá.”

“Really? That’s awesome. How soon can you go?”

“Well, we need to finish building our house, pay off our debts, and my husband needs to work a month or two in the lowlands to make some money — then we can go.” As time progressed, Jilin enrolled in a program to expedite getting a high school certificate and it seemed Marmá was fast fading from their plan.
One Sabbath, as we studied about Abraham being called to go to Ur, the question was asked, “If God is calling you to do something, should we ever answer Him, ‘Sure, I’ll do it after….’ or does He honor our prompt obedience?” Jilin and Junie chatted. Meanwhile, I prayed that God would impress them with His will.
After church, Jilin and Junie approached and said, “That Bible study convicted us. We aren’t supposed to delay anymore. If God wants me to finish the high school certificate, He will provide a way, but we are supposed to go to Marmá as soon as it can be arranged.” My heart warmed to witness the Holy Spirit working. We were proud that our daughter and her husband were finally serious about going.

This past weekend, Kent and I visited Marmá for the first time. What a warm welcome we received. Jilin said people had been waiting for us since 7:00 in the morning. We arrived after 3:30 in the afternoon, but they were still there and eagerly waiting.

Jilin and Junie, with their three children, have been in Marmá just under a month and living under very primitive conditions. The temporary school proved inadequate, and it was decided to move the whole village to a spot more accessible by small plane. While clearing the landing strip of the biggest trees, they built a sturdier school that could also house Jilin and Junie’s family while more permanent buildings are built.

It was heartwarming to awaken Sabbath morning to the voices of children singing songs they have been learning about Jesus. I’m sure it makes Jesus’ heart happy to hear their simple expressions of a growing love for Him.

Sunday morning, we held a meeting of all interested parents and let them know that, beyond reading, writing and math, we felt what was most important to teach was character development. “That is so true,” they replied. “We all agree that is what we want you to do — help our children form good characters.”
We talked about the cost of education and how we recognize that, while they don’t have money right now, they have proven they are industrious and intent on having a school. We proposed they continue to work hard to build the permanent school and teacher house, dig for outhouses and trash pits, and level the runway. “That’s great. We are definitely willing to work hard to see that this school is a success. We are happy to do it in exchange for you educating our kids and giving them uniforms and school supplies this first year.”

We explained that it would take months to level the runway but, if it were acceptable, we could pay them in rice for each day of hard work. “Oh, yes! Having rice each day will be such a blessing. That is very generous.”

We also talked about the long and difficult river trail they would have to follow to bring in the rice. “We will pay you cash for each kilo you carry,” we offered. “Oh, yes! Having cash will be a good thing. We can buy other items we need.”

These people are so open, positive, easygoing and yet industrious. They work hard and they work well together. This isn’t something we have on every project, so it is a breath of fresh air.

During our time visiting Marmá, we have been able to people watch. Space does not afford the opportunity to talk much about the great people we have met and the work the Holy Spirit is doing. However, I would like to introduce you to a few of the villagers and invite you to join us on our blog and witness how the Holy Spirit continues His work.

Saduk, the gentleman who requested the school and a nurse, isn’t a recognized leader in the village, but has leadership qualities. He has one wife and five children.

Panglima Sleeping-Mat, a village elder, “put away” his first wife, Idna, mother of his six children, to take a younger wife. When the younger wife needed to go to the hospital, Idna accompanied her. This is truly forgiveness in action.

Panglima Islana, another village elder, has two wives. The first is a grandmother with coarse skin and a pleasing smile who I look forward to getting better acquainted with. The second wife faces mental challenges and doesn’t speak coherently. She became quite emotional when greeting us and mistook us for relatives. It has been my prayer that God would touch her heart with His love, even though she might not understand the words.

Siday is a preemie who, at five months of age, remains tiny and frail. She reminds me of how our little granddaughter Lanie looked when she came to be part of our hearts.

Ranil is a roly-poly baby that just loves to laugh and, because it is so contagious, people often get him going over and over again.

There is the middle-aged woman considered the village thief. Simple in thought and understanding, they haven’t shunned her — they just keep an eye on everything when she’s around.

And the young man that is a confirmed thief. They told him, “Missionaries are coming to live among us, and we don’t want you stealing from them. Therefore, you can’t live in this new village.” And he doesn’t, though he did visit.

Finally, there is fifteen-year-old Alina. Married about the age of ten and newly divorced from a man much older than herself, she has no children. Friendly and eager to please, Alina is learning very quickly in school and Jilin thinks she will eventually become a teacher’s aide and help with the younger children.
It was hard saying good-bye knowing that in this uncertain world, anything can happen, but we trust that God will continue to protect them and provide for their needs. We also trust that when we visit again, there will be those who are opening their hearts to Jesus.

Epilogue: We have been thrilled to see Jilin and Junie thriving. Both are intentionally spending lots of time with the people and sacrificing themselves and their belongings to help those with much less than they have. They have been living in an open tarp-house under which they pitched their tent — an invitation for people to drop by and visit anytime. But, in this culture, one should not eat in front of others unless one can share. And, if you don’t have enough food to feed everyone that visits, you don’t feed your family either. Though this living arrangement has been great for getting acquainted with people, it has been stressful and not sustainable. So, as we departed, we helped them move their things to the new house where they could have some privacy and more consistent meals and time just for their family. God bless.