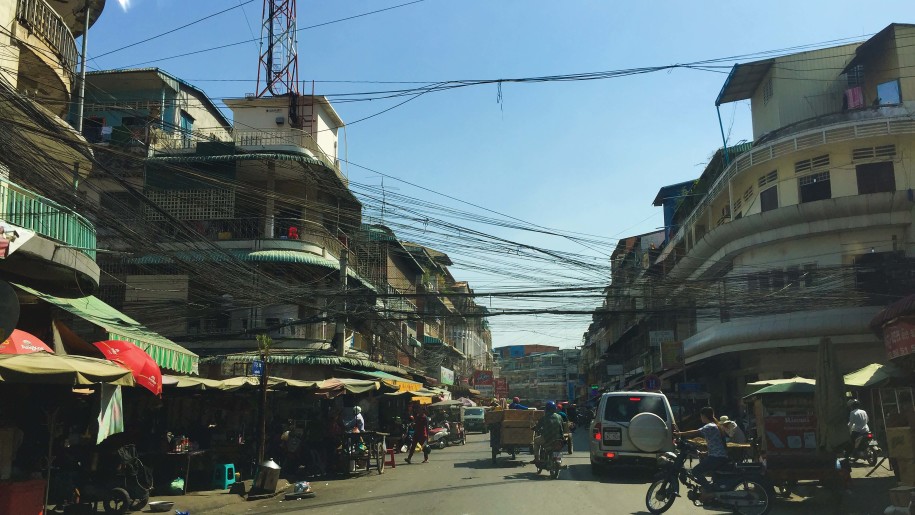 I left work early and showered away the red dust from cutting bricks. That night I was going to flag down a taxi and ride into Phnom Penh to surprise Stephanie who was staying in an apartment there by herself for five weeks while she attended a language class. Soon after we had registered her for classes and rented the apartment, we found out we had a new little missionary on the way! Still, Stephanie was determined to follow through with the class. I didn’t like being apart at a time like this, especially since it was all she could do to make it through classes without throwing up.

Taxis come by every few minutes, so I started walking along the road waving to them as they passed. But this evening they all were full. After an hour, some friendly locals called me over to sit down with them for a while. One of them volunteered to stand by the road so I wouldn’t miss an available taxi if one came by.

After 20 minutes even he couldn’t get a taxi to stop. I started to feel bad for him since he had a short leg, and standing so long was uncomfortable for him. I thanked my new friends and headed back to the road. A crowd gathered, asking me questions and all trying to wave down passing cars. I bid them all goodbye and kept walking. In a few minutes it would be dark, and my chances of being picked up would greatly diminish.

God, I prayed, I’m Your missionary just trying to go take care of my wife. She’s alone and going through morning sickness. She needs me. I don’t know why no taxis are stopping. But whatever Your plan is, I thank You.

My pack was getting heavy, and my water was gone. Another van whizzed by. The driver didn’t even seem to see me, but then he pulled over about 200 meters past me at a roadside shop. I doubted that I could catch up before he finished his business and drove on. But as I got closer, I realized he was waiting for me. “Come in! Sit down and relax,” said the driver and his passenger, and we sped away. I looked around the van, noticing its cargo of fancy video equipment. Thanks, God! You really outdid Yourself! The van was new and clean and had air fresheners. This was not a typical dilapidated taxi full of loud music and sweaty bodies. I began talking with the two men and learned that they were a director of CTN (Cambodia Television Network) and his personal driver. They were in Kratie, the capital of our province, making arrangements for a big concert. I reclined my seat and took a short rest.

Soon they were discussing where to stop for dinner. They weren’t familiar with this part of Cambodia, so I suggested a restaurant run by a childhood friend of mine. As we sat and ate together, the older man asked, “What is your heart’s motivation for coming to Cambodia?”

“I read in my Bible that time on this world is short,” I began. “Jesus, the greatest God who created all life, is coming back soon. I’m looking for people who want to learn about His ways and live holy lives so they can be ready for heaven.”

The remaining four hours of our trip together were filled with soul-searching conversation. The men asked me about the problem of suffering, and I told them of the great war between God and Satan that is rapidly coming to its close, and how God is looking for people willing to receive new hearts from Him. We talked about the alcohol problem in Cambodia, and they were very impressed with the concept that the brain is where God communicates with us, and the Devil’s plan is to keep people under the stupor of alcohol so nothing can get through.

They asked me if I had witnessed any miracles that proved God exists. They asked me for evidence of His impact on my life. I shared how I came to love and serve God because of the influence of my parents, and I told them miracle stories one after another. The atmosphere in the van became more and more charged with the Holy Spirit’s presence.

They asked if I had been praying before they picked me up. The television executive told me that he had been sleeping the whole trip, but he opened his eyes just in time to see me waving.

When we arrived at the television station, I prayed with them. My host asked what part of the city Stephanie was in and brought me in his personal car right to the gate. We sat in the car for half an hour recounting the miracles that had happened that day: The taxis had been full; he had awakened out of a sound sleep just in time to see me; Stephanie’s apartment was on the way to his own house and so many more miracles. I showed him how to download the Bible.is app so he could listen to God’s Word in Khmer or English. We exchanged contact information and promised to see each other again. I’m expecting to see him again soon, as he promised to stop by on his next trip to Kratie.

It was after 11 when I climbed six flights of stairs to Stephanie’s apartment. I didn’t have the access key to the elevator, and her phone was on silent, so it took another long hour of knocking on the door and swatting mosquitoes before she let me in. It was a joyful surprise.