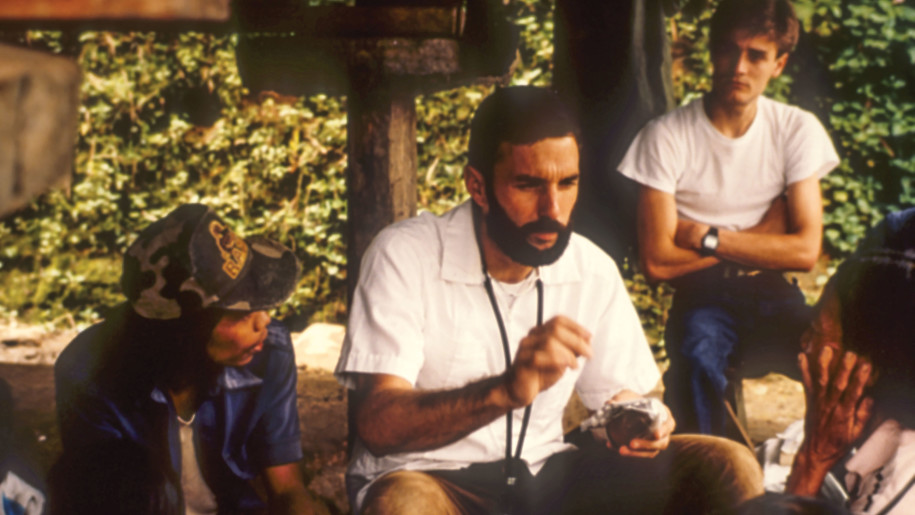 “We will give you land for a church and a school if only you will send us a missionary!”

Music to a missionary’s ears, right? Well, sometimes. When AFM’s founder, Clyde Morgan, was in his earlier years and working as a student missionary, he heard from a seasoned missionary that this kind of request came in repeatedly, but there weren’t any missionaries available to send.

After Clyde returned to the States, he heard Christians express a desire to serve as missionaries, but they were unable to find a call. Knowing that there were both mission calls and people willing to go, he wished there were more ways to bring the two together.

That was in the early 1980s, and Clyde was in the seminary. One night as he was wrestling with the problem, his wife said, “Why don’t you create an organization and do something about it?”

“It would be such an uphill battle. It just wouldn’t be worth it,” Clyde replied. But the thought kept coming back. He tried to shake it off, but it grabbed a hold of him and wouldn’t let go. “It was something I just could not escape,” he says. “Everybody wants to know they are doing the Lord’s will.” But how could he know that starting a new mission organization was truly God’s will and not simply a distraction?

Clyde continued praying about it and sought counsel from people in the world of missions, people like Drs. Gottfried Oosterwal and Russell Staples. Both men encouraged Clyde to move forward with building an organization, starting with a simple project to gain experience. They and others encouraged him to be attentive to God’s voice and allow Him to lead. They also discussed the challenges. Starting a mission organization wouldn’t be easy. “I had fears,” says Clyde, “but you know, it was something I had to do if I was going to continue following God. If I had turned away, that would have been a major thing. If you are strongly convicted that God wants you to do something, how do you turn away from THAT? I wanted to do it, it’s just that . . . ‘Lord, HOW?’ ”

Stepping out in faith, the Morgans organized Adventist Frontier Missions in September 1985, three months before Clyde graduated from the seminary. Looking back on those early days, Clyde remembers being strongly impressed that God wanted him to not only start the organization but to jump in with both feet. It would be his full-time work from the very start. To do that, he would need money to pay his rent and care for his family, and he had no idea where it would come from. Clyde went outside and climbed a hill where he could be alone with God. He wanted to be sure he understood what God wanted, so he asked God to confirm his call to full-time ministry by managing these financial needs. A few hours later he was informed that a donation of $350 had arrived. Then came a check for $1,000. At this point, his first month was more than taken care of, and Clyde had his confirmation. By the time his next rent was due, there was a check for $1,500.

Clyde realized that AFM wasn’t just a team involving God and Clyde; God was calling donors to be on the team, too. Missionaries would be next, then unreached people. That was all Clyde needed to know. He never turned back.

Dr. William Dysinger was among those who encouraged Clyde to move forward. Once the organization was in place, he recommended a young couple, Marc and Aunie Scalzi, to be the first missionaries. God confirmed this call, and not too long afterwards the Scalzi family found themselves deeply entrenched in the work in Ifugao, Philippines. God blessed that work, and a strong church was established, a church that has continued to grow and plant more churches over the years.

I talked with one of Marc’s original donors, Dr. Donald Casebolt, and asked him about those early days. He had known Marc since he was 12 and felt he was a perfect candidate for the mission field. Of his many years of faithful support, Dr. Casebolt said, “I have always been interested in the mission field. Christ’s Second Coming is so near . . . we need to be doing all we can . . . If I can’t be actively involved in one way, well, I’ve got a pocketbook!”

Brad and Cathie Jolly were also among the early AFM missionaries. I asked Cathie what it was like. She said she grew up thinking the work was pretty much done, and Christians were simply waiting for Jesus to come. Brad knew differently. The work wasn’t even close to being done, and he shared this with her. At first she was shocked, but that soon led to a passion to do something about it and prayers for God to show them how.

Then came that fateful day in 1989 when Brad helped to develop a world map that showed a number of countries blacked out to indicate that they were unreached. Cathie noticed Mongolia was among them and immediately sensed God calling them to work there. But Brad was convinced the door to work in Mongolia was closed. Cathie went to the Lord. If He had given her the call to serve in Mongolia, He needed to give it to Brad as well. A few days later, Brad came home with a stack of books—on Mongolia. The fire was lit.

Brad initially looked for organizations willing to work in Mongolia, but nothing seemed to work out. By this time, he and Cathie were so convinced that God was calling them that they decided to go on their own and began raising funds. Then came a conversation with Clyde where He asked the big question: “Why don’t you go with AFM?” A short time later, they did.

When asked what she treasures most about their first years in Mongolia, Cathie quickly responded, “We could sense the presence and power of the Holy Spirit. It was so real.” They were in the middle of God’s will, and they knew it. They enjoyed watching as God raised their support and provided their visas, and His Spirit drew Mongolian hearts to Jesus and into sweet fellowship together. 1
Another “old timer,” Curtis Hartman, whose “short term” of service lasted for six years, agrees. As a nurse in 1994, he had a sense that he wasn’t destined for a job in the States. When offered opportunities for advancement, he turned them down but wasn’t sure why. Then he went to a mission conference and learned about the massive numbers of unreached people. Isaiah 6 was a key reference, and Curtis deeply identified with Isaiah’s feeling of unworthiness at the beginning of the chapter and his gratitude for God’s cleansing. Next came God’s question, “Who will go for us?” Isaiah answered, “Here I am! Send me.” Curtis answered the same. He sensed the Holy Spirit’s presence and His calling to serve the unreached. God had a plan, and Curtis wanted nothing less than to be in the middle of it. He went to the mission field. As he watched his first convert being baptized, he knew he was in the right place. The Holy Spirit seemed so close. And God had used him. What an honor!

What stands out to me about those early years at AFM is just how often God called people, laid out their work, and then guided them in it. People responded to God’s call as a sacred privilege, a treasure they dared not spoil through unbelief. They didn’t make typical choices and couldn’t follow the pack. They had to step out of the mainstream, think carefully, then make wise decisions that didn’t make sense unless God was involved. It’s the hand of God that makes AFM’s history so beautiful.

I invited AFM’s current president, Conrad Vine, to give us a tiny glimpse of that sacred hand as it is revealed in AFM today. Once again, it’s a beautiful story.

“Looking back, it is humbling to see how the Holy Spirit has led and blessed over the years. It is natural to ask, ‘Do we still see the same Spirit at work in such a beautiful way today?’ Absolutely! In early 2019, the Patel family launched to the Himadri Project, seeking to reach an entirely unreached nation in Southeast Asia. Because this nation refuses to allow foreigners to live within its borders, the Patel family was forced to live in a Himadri community in a neighboring country. Since their arrival, and despite their not knowing the language, the Holy Spirit has moved powerfully, so now there is already a thriving Himadri community of born-again disciples. They meet almost daily for worship and witness with their own local leaders, and they are already sending Himadri members back into their homeland to share the gospel. During the COVID-19 pandemic, the Patels have been evacuated, but the work has gone ahead with greater force.

“Elsewhere, AFM personnel started holding online Bible study and worship services in Arabic when the COVID-19 pandemic struck. Muslims from around the Middle East have begun to join in, seeking hope when their faith offers only fatalism. Now up to three worship services are held each Sabbath. In the heart of war-torn Syria, a local man joined the studies in early April, and he has now accepted the gospel along with his family. This family, together with AFM personnel, are now holding weekly studies with up to 25 local young men, all seeking answers which their own faith does not provide. By God’s grace, the first new Adventist congregation in over 50 years is taking shape in this war-torn Syrian city. Yes, the COVID-19 pandemic is sweeping the world, but so is the Holy Spirit. And when He moves, no pandemic, civil war or border can hold Him back! Truly, to serve with AFM is to have the awesome privilege of seeing the Holy Spirit at work every single day!”

So many stories; and alas, so little space!

As we look to the future and consider the billions who have yet to hear the gospel for the very first time, we see that there is still a God-sized work to do. May we each listen carefully for the call of God, then step forward, building on the faith of those who have gone before us. Let’s hold the hand of the Almighty and allow Him to lead us to success!