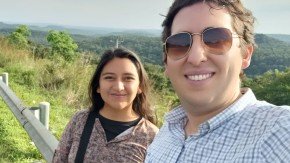 Team missionaries since 2021, we are an Argentinian-Equatorian couple serving the Pnong people of Cambodia.

Cristian was born in the southern part of South America, in Ushuaia, the last southern city of Argentina. After several painful circumstances in his life, such as the sadness of losing his mother when he was 12 years old, he got to know the church through an invitation during a special Christmas week. From that moment on, the church became his new family, and Jesus became the person who would take charge of his life. Cristian decided to give his life in service to Jesus through pastoral ministry, always with the desire to share the gospel in places not yet reached. He studied theology at Universidad Adventista del Plata (Adventist University of the Plata), immersing himself in missions: participating in different missionary groups and projects and traveling to various places.

Solange (better known as Sol) was born into a Christian home. Her father is a pastor. Along with her family, Solange understood the value of sharing God’s word with others to give them hope. But, as her personality reflects, she felt the need for an even greater challenge: to be a missionary in the most hard-to-reach countries. That is why, at age 16, Solange traveled to Argentina to study at the Universidad Adventista del Plata to obtain a nursing degree. Through that career, she hoped to share the message of salvation with others. Solange participated in or led several missionary groups. At one point, she decided to begin her missionary career in a country where it was truly challenging to preach the gospel. Regrettably, that trip did not materialize, which was a severe blow to her. Solange did not know that God had stretched her time at Universidad Adventista del Plata a little longer—so she did not go alone.

We met in a missionary group and, recognizing we had many things in common, immediately became great friends. After a year, those feelings of appreciation grew, and we started dating. Almost two years later, we got married.

Our desire to be cross-cultural missionaries continued to burn in our hearts as we finished our education.

We decided, as an act of faith, to start applying to different mission agencies. Because our calling had been so clear, we started selling everything we owned, even before having a destination. When we were down to only two suitcases and their contents, our first call came. We gained a year of experience as full-time missionaries before partnering with AFM. After some incredible adventures and witnessing miracles in other mission fields, AFM blessed us with a call to work on the Pnong Project.

Here, we lead village ministry. Our goal is to reach as many people as possible, introducing them to Jesus, working with the Holy Spirit to help them discover the freedom that only Jesus can give them, inviting them to become His disciples and giving them an opportunity to lead others to follow Him. Our dream? It is seeing a movement of local disciples free from their fear of spirits and demons.

We are thankful to God that we are here now—knowing He had a plan for us in the past that extends into the future.

Though her friends are not baptized yet, they are already missionaries.

It is not about us.

A family deciding between God or the spirits.

It was not easy for this couple to decide to follow Christ. They are challenged daily as they stand firm for divine principles.

In the Right Time