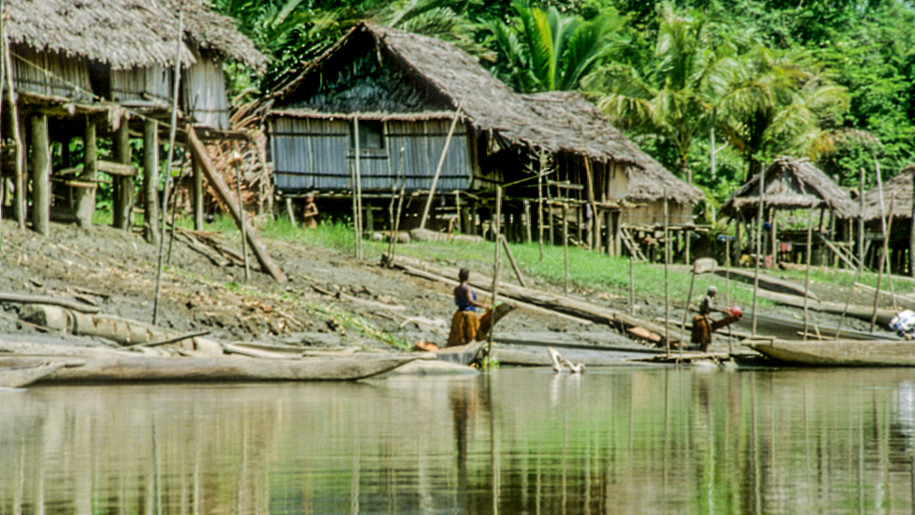 The Namia are hunter/gatherers and subsistence farmers who depend on the river and jungle for food and transportation.

The Namia are a tribal group of about 5,000 people who live deep in the jungles surrounding the great Sepik River of Papua New Guinea. To get there from North America, one must travel more than 30 hours by air to Wewak, then six hours in a 4WD truck to the Sepik River. Finally, a motor-canoe ride of about 300 miles up the Sepik River will bring you to the Namia tribal area.

The Namia are hunter/gatherers and subsistence farmers who depend on the river and jungle for food and transportation. Education is not an option open for most, so the literacy rate is only 5 to 15 percent. Medical care is not readily available. For transportation, they use long, narrow dugout canoes. There are no roads. The rivers can be treacherous, making travel in this inhospitable terrain a challenge. The topography of the land and the diversity of languages also contribute to the Namia’s isolation. There is very little interaction between tribal groups. Tribes in this area have a strong and ancient belief in nature spirits. Their culture and traditions have remained unchanged for centuries. This is evident in the spiritual rituals they still practice, such as the manhood initiation which involves carving the flesh on the backs of young men with razor blades, drawing pictures of crocodiles.
Some Bible portions have been translated into the Namia language, but they have few other resources to learn of Jesus. Given the low literacy rate, few can take advantage of the Bible portions that have been translated. Cultural and spiritual beliefs hold them in fear, and they do not know the freedom of having a friend in Jesus.

It is possible to purchase Sepik River art and to book tours of the lower Sepik River on the Internet. Tourists visit spirit houses and view spirit dances. Many believe the most important thing is to preserve Namia culture.
We believe something more is being preserved on the Sepik River—fear. Commercializing spirit worship doesn’t remove the fear it engenders in the hearts of the Namia. We would like to reach the Namia people for Jesus before the tourism and materialism changes them forever. Our desire is to teach them of a loving Savior and turn their eyes to eternity.

An AFM missionary family accepted a call to reach the Namia people in 2006, but they had to suspend their launching efforts in 2008 due to financial circumstances.