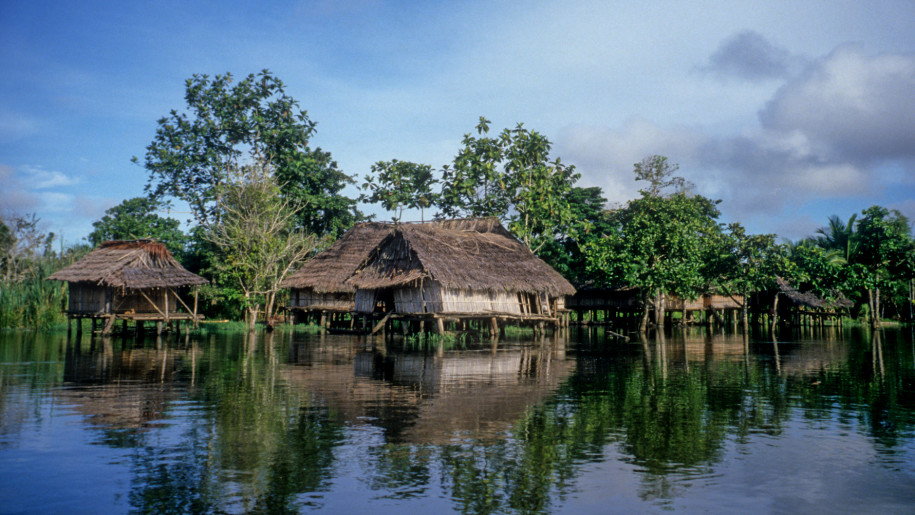 The Iwam project was incorporated into the South-Pacific Division of Seventh-day Adventists in March of 1997. Today, the Iwam church is experiencing a period of exciting spiritual and numerical growth.

Ministering to the Iwam people since July 1989

By John Kent. We stood on the bank of the May River surrounded by scores of men, women, and children. Their bodies were covered with ringworm and sores. They reeked of sweat, dirt and disease. Their stomachs protruded from parasites and malnutrition; their teeth and lips were beetle-nut stained from red to black. They chattered in a language we couldn’t comprehend. Belinda clung to our three small boys, reluctant to let those dirty, disease-covered hands touch them.

Behind us, outboard motors roared to life. We turned and watched the boat that had brought us pull away from the bank and disappear around a bend in the river. As we stood there, the sense of loneliness and isolation was overwhelming. We were now alone among the Iwam, a primitive, unreached animistic tribal group. It was 180 miles by log canoe to the nearest road and 270 miles to the nearest town. We turned from the riverbank to face the people and step into our future. We were the Kents, AFM missionaries called by God to establish His kingdom among the Iwam.

Though nearly 21 years have passed since that day, the memories and the lessons learned during our years in Papua New Guinea continue to impact many lives. There was so much we didn’t know on that first day. How could we have known how difficult would be the challenges of heat, humidity, malaria (again and again and again), hepatitis, boils, infections of all types, isolation, and a host of other fiery darts from the devil? How could we have known how deeply we would grow to love and care for those Iwam people who surrounded us that first day, how they would become as dear to us as our own children? The May River story, though far from perfect, is an ongoing adventure drama that is still instructing and teaching AFM about what it means to be effective in extending the kingdom of God on earth. The years following our departure from May River were not a bed of roses. The enemy began a slow, systematic process of ravaging the Iwam church.

The same isolation that separated us from family and friends also separated the Iwam from the guidance, nurture and support of the local mission. Leaders struggled and failed, members fell away, and the once vibrant church almost vanished. It was not until 2005, during an onsite visit, that we realized the enemy was attempting to destroy every good thing God had done. By God’s grace, Sam and Joanne Kewa, dear friends and devoted believers from another part of Papua New Guinea, accepted a call to move to May River to provide the nurture, guidance and direction the struggling church needed. Others, like some of you reading this story, began providing financial and prayer support for the Kewas. Over the next few years, God used this missionary couple to reclaim the Iwam people for His kingdom. I praise God for the devotion, commitment, and hard work Sam and Joanne have invested into the Iwam people.

Today, the Iwam church is experiencing a period of exciting spiritual and numerical growth. During a recent visit to May River, my close friend and associate Dale Goodson witnessed an overflowing, vibrant church body. New believers were baptized, and 30 more came forward to indicate their desire to follow their tribal brothers and sisters into the family of God. Lives are being transformed, a mission school has been established in the village of Imombi with over 80 students in attendance, and the May River believers are nurturing young churches and interests in far-flung places like Ama and Durupas. My heart is overjoyed by the news.

As I reflect on the past 21 years, I recognize that successfully establishing the church among an unreached people demands a deep commitment to three important principles. First, our goal is not just to share information and then have baptisms, but to develop spiritually mature followers of Jesus. Second, the development of people from spiritual infancy to spiritual maturity takes time a long time. As with raising a child, raising a church to maturity requires much more work and commitment than birthing it. We dare not go around the world birthing spiritual children we are not deeply committed to raising to adulthood. Third: it is costly, very costly. Birthing a child requires a few hours of pain and about $5,000. Raising one requires years of sleepless nights, endless worry, trips to the hospital, intense focus and approximately $300,000. But the reward of seeing a child you birthed or a church become a highly functional, contributing member of the kingdom of God is priceless.

At May River, the church continues its progress toward maturity. I am so excited as I watch it step into its own exciting future, and I worship the God who called my family to play our part in its birth, growth and development. May He be worshipped and praised!

If you are interested in learning more about the culture of the Iwam people, try some of these links.