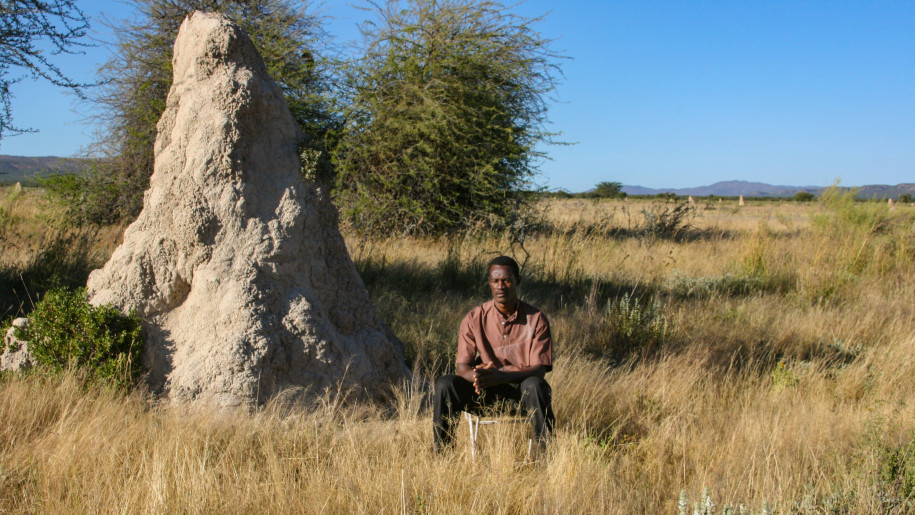 The Himba cling to their traditions. Himba women are noted for their intricate hairstyles, traditional jewelry and the red coloring they get from rubbing their bodies with red ocher, sap and butter.

Ministering to the Himba people since 1998

The Himba are an ethnic group of about 30,000+ living in northern Namibia, in the Kunene region (formerly Kaokoland) and parts of southern Angola. They are a nomadic, pastoral people, closely related to the Herero, and speak the same language. In fact, the Himba are actually descendants of a group of Herero herders who fled into the remote northwest after been displaced by the severe drought and wars. The Himba have clung to their traditions and the Himba women are noted for their intricate hairstyles, and traditional jewelry and the beautiful red coloring they get from rubbing their bodies with red ocher and fat to protect themselves from the sun. Himba men and woman wear few clothes apart from a loin cloth or short goatskin skirt.

The Himba mostly tend cattle—although they also have keep an abundance of goats—and it is with these cattle that they measure their wealth. The cattle provide milk and butter fat and is part of their daily diet along with corn meal, vegetables and the occasional wild game. The cattle are also used for dowry payments.

Twice a day the adult women color their skin with a mixture of ground red ocher, sap and butter, and rub this all over their skin and hair. This is called otjize. They also grind up herbs and mix it with the ocher to use as perfume.

The Himba trace descendents through both a child‘s mother and father, creating a network of relations that bind together scattered groups of herders in an often harsh environment. Although a woman remains a member of their mother‘s family all their lives, at marriage she leaves her father‘s family to become members of her husband‘s. The wedding headdress stays within the matrilineage, passed down from mother to daughter.

Their jewelry is usually made of iron or shell, strung on leather. In addition, the men make thick anklets out of wrought iron beads and strung onto a leather support structure for the women to wear not only an adornments but also to protect the ankles from snake bites.

The standard Himba home is a hut constructed from sticks and mud mixed with cow dung with a thatch roof. The wealthier and more influential of the Himba may have an occasional tin roof. In an extended family village, there are also food storage huts, raised dry food storage, several huts for family members and the holy fire all surrounding the cattle corral.

The Himba are a monotheistic people, but also practice ancestor worship as well. Each family has its own ancestral fire, which is kept by the fire-keeper, usually the father of the extended family clan. He acts as the priest for the family and approaches the ancestral fire every seven to eight days in order to communicate with God through the ancestors for any requests on behalf of his family.

Gideon and Pam Petersen have been working with AFM to plant a church among the Himba people of Namibia since 1998. The Petersens work involved many trips into the countryside to visit their semi-nomadic Himba friends. They researched and developed new methods of outreach adapted to the Himba, a wise and contemplative people forever on the move with their herds of livestock, searching for water and grass for grazing. The Petersens’ goal was to introduce them to the Good Shepherd who will give them living water and lead them to green pastures where they can find rest and peace amidst the hardships of life.

On Sabbath, May 22, 2011, the inaugural Himba camp meeting and the launch of the ambassadors—solar-powered MP3 players recorded with Bible stories in the Himba language using traditional poetry and chants—was about to begin.

Pam and Gideon Petersen and Charlie Eklund, in addition to their small, faithful church, put several years of hard work into producing the oral materials for the Himba people and recording them to the ambassadors. They discovered the key to reaching this tribe was to use the rich Himba oral storytelling techniques that involve singing, chanting, poetry, repetition and interactive audience participation.

For a dozen years before that, Gideon had tried nearly every technique known in Christian circles to reach the Himba. First, he used traditional Bible studies. But it was all too foreign and irrelevant to their needs. Then he tried a visual approach with felt boards and picture rolls. But the contrast between the colorful felts and the stark wilderness surrounding the villages was too great a distraction. Then he used observations and object lessons from everyday life. But the Himba people couldn‘t remember his stories from one week to another. So he tried literacy. But teaching the Himba to read and write took painfully long. Besides, does Gods salvation require a knowledge of reading and writing? Gideon tried living with the people as they live. While this helped him forge strong friendships, he still had limited success in winning anyone to Christ.

Finally, Gideon noticed the Himba interest in songs, dancing and chanting. As he passed through a village one day, he saw a special ceremony taking place where the traditional means of communication were in full motion. Graciously, the villagers let him observe. Afterwards, for the first time ever, they began to answer his questions and give him insight into their culture. It was the breakthrough for which Gideon and Pam had been searching and praying.

The Himba have resisted missionary efforts for more than 150 years, but by using their methods of learning and their styles of listening, discussion and participation, the missionaries are now starting to reach them.

Half an hour into the program, the Himba began to arrivefirst the children and youth, then the mothers. From a cattle trail between the thorny trees, a Himba man made his way to the meeting tent. He wore leather sandals dusty from his journey, a purple wrap skirt that flowed down to his knees, a double-edged knife secure in a sheath on his belt, and an unbuttoned shirt. With his left hand he carried a walking stick, and with his right he carried a green canvas-and-aluminum folding stool. Then another man arrived from the north and another from the west. As the program progressed, one by one, men came walking from every direction and every homestead in the area. These were the heads of households, the movers and shakers of their communities.

Kapitango, a local church leader trained by the Petersens, began talking about katjitwaenda, the long-ago time in Himba lore when all was well and people worshiped their Creator. Modern Himba feel they are under a curse because their tribe has drifted away from the Creator God. But this was no monologue sermon. Kapitango dialogued with his audience, much like a town hall meeting, about relevant and important issues of the day. Each person respectfully awaited a turn to speak, and the audience would sometimes burst out into spontaneous applauseled by the Himbaas someone would speak a truth that resonated in the hearts of everyone listening. At times, Himba men would break into omiimbo (poetry). Later, a group of women and a male leader chanted and sang scripture in their traditional style. Clearly, God was speaking to the Himba. The topic of katjitwaenda struck a chord. After lunch, a group of Himba men gathered to discuss the proceedings.

Finally, the moment arrived for passing out the ambassadors. Kapitango gave instructions about their use and presented the first as a gift to the head chief. The chief expressed his thanks. Then Kapitango told the Himba audience, Anyone who would like to have an ambassador, please sign up for Bible studies. Fifty-three people signed up, both men and women.

God can and does speak to His people in different ways. And he sends us to meet them where we are.

As Himba are considered the most photographed tribe in all of Africa, there is much information available about the Himba people, their history and their culture. One of the better summaries of Himba life are given by the safari company, New African Frontiers and Wikipedia also contains more details.
Here are a few links for more information.

Teach me to share them with others I meet so that my life can truly be a blessing.

Change is the Only Constant

I love change. Its so exciting. I really enjoy all that change bringsnew friends, new experiences and new challenges.