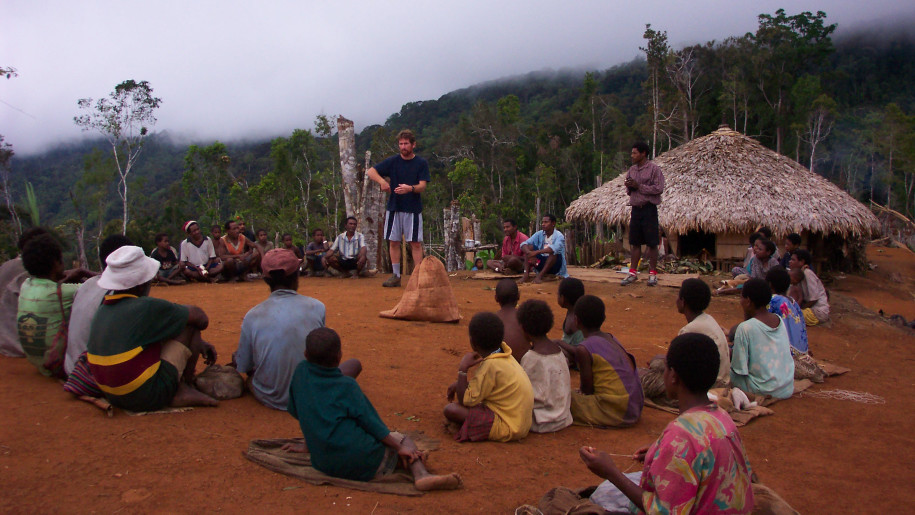 The Dowa project was incorporated into the South-Pacific Division of Seventh-day Adventists on June 7, 2007.

Ministering to the Dowa people since December 1995.

In all the world there is no place like Papua New Guinea. Little more than 100 miles north of Australia, across the Torres Strait, Papua New Guinea shares the great island of New Guinea with Indonesia’s Irian Jaya to the west. Unless you have seen it with your own eyes, and walked the land with you own feet; you will find it difficult to imagine what life is like in Papua New Guinea. Try to imagine life from within such a land of contrasts and diversity. Try to imagine growing up in a family of the Dowa People of the central highlands, trekking many miles and hunting by your wits amidst mountains wrapped in thick living green jungle.

Though the great mountains and rivers are the bones and lifeblood of the land, they have also proven to be very capable fences, dividing the island up and allowing hundreds of diverse people groups to develop in isolation from one another. Over the centuries, the myriad mountain valleys and impenetrable swamps of Papua New Guinea have preserved time capsules of language and culture. It is staggering to consider the number of languages spoken in this island nation. New Guinea is slightly larger than California, and its population numbers roughly 4.6 million people, or slightly less than the population of Minnesota. But what is most remarkable is that these people speak a total of 817 separate languages and over 1600 dialects! What must it be like to grow up sharing a language with less than 100 people? This situation is not uncommon in Papua New Guinea. Since many native languages are spoken by only a handful of people in small, localized areas, most people also speak Tok Pidgin, a creole language that borrows from German and English

The Tok Pidgin language is a good illustration of how the peoples of Papua New Guinea approach spiritual matters as well. They have proven just as eager to mix old and new religions as they have to blend old ancestral tongues with new western words.
The traditional worldview of Papua New Guinea is based on Animism. As secluded and diverse as the many tribes were, for centuries they have been unanimous in this respect. For an animist, every moment of life is colored by the belief that spirits of animals, rocks, and trees, spirits of wind, water, and fire, are flitting everywhere. Greater and lesser spirits inhabit all things and require endless watchfulness and appeasement. Most are malevolent or at best indifferent. If one is brave he or she might try to manipulate the spirits for healing, personal gain, or revenge. But the safest course is to just do as the spirits require and avoid them as much as possible.

I clearly remember January 1, 1996, the day we arrived on an island just offshore of our new missionary assignment in Papua New Guinea. We were tired, dirty and lonely and didn’t understand the language. I was told the local village name meant “Cigarette Butt,” which seemed appropriate as the sand burned our feet. Everything was new and exciting, but not in a pleasant way. My family looked to me for survival, and our donors depended on me to plant a strong church. Desire for success and fear of failure both stared me in the face, and I had no idea what to do next.

By April 1998, things looked much better as our first 28 Dowa believers stepped into the waters of baptism. Sweet tears of joy streamed down my cheeks as I sang the pidgin translation of I Have Decided to Follow Jesus. A few months later, bitter tears streamed down my face as I realized I would have to start all over again. All the new believers had either backslidden or were practicing syncretism. It was as if I was standing once again on Cigarette Butt Island with no idea what to do next, and the sand was hotter than ever.

In the Adventist Frontiers magazine, I have since written many articles about the lessons I learned from the cultural research that followed. As the project progressed, I told of converted witchdoctors, charm burnings, development of branch Sabbath Schools and the struggle to start a school (the first pupils jumped out the windows every time the teacher faced the blackboard). I have described the lessons we worked so hard on to help the Kamea people understand the gospel without confusing it with cultural myths or animism.

Through all this, fear of failure still haunted me. For every new baptism, I feared another would backslide. I rejoiced when people gave their lives to Christ, but I struggled to trust their sincerity.

When we completed the Dowa Project in 2007, I wrote about the new conversions, the new school and the success of the evangelistic materials. What I didn’t mention was that, in my heart, I still questioned how long the success would last after our family left PNG. Since we weren’t there to help pick up the pieces, I feared any failure would be permanent. I was standing on Cigarette Butt Island all over again.

My fears came true. Things fell apart. One of our lay pastors struggled with his commitment, and his members struggled, too. Two other lay pastors were drawn away to churches in other districts. Another lay pastor got sick and died. I didn’t want to talk about the Dowa project to anybody but God.

But then things began to change. As leaders fell, others stood to take their places. Baptisms continued. In 2009, there were 17 more just before Christmas. Two more teachers joined the school. In a few months, they will have their largest eighth-grade graduation ever—20 students. Enrollment went from 70 to more than 150.

Amazingly, a number of people I have been lifting up in prayer for almost 15 years recently gave their lives to Christ. This wasn’t the result of an evangelistic campaign or a trained pastor’s professional care, but from the example of uneducated, untrained believers who consistently practiced biblical principals in their daily lives. To me, this is truly a sign of a successful AFM project, and thankfulness to God is crowding out my fears. He is at work—no longer through me, but through those I left behind.

The Dowa church has grown in my absence. They have had to deal with apostasy, death, confusion, threats, false accusations and loss of leadership. I cringe as I hear of each new trial. But in spite of it all, they continue to worship God, share their faith and lead more people to Christ.

Looking back, I realize the events I considered personal failures were God’s tools to teach me and the Dowa people valuable lessons of faith. The project was never insecure as long as I allowed God to lead.

Incorporated into SDA Church in 2007