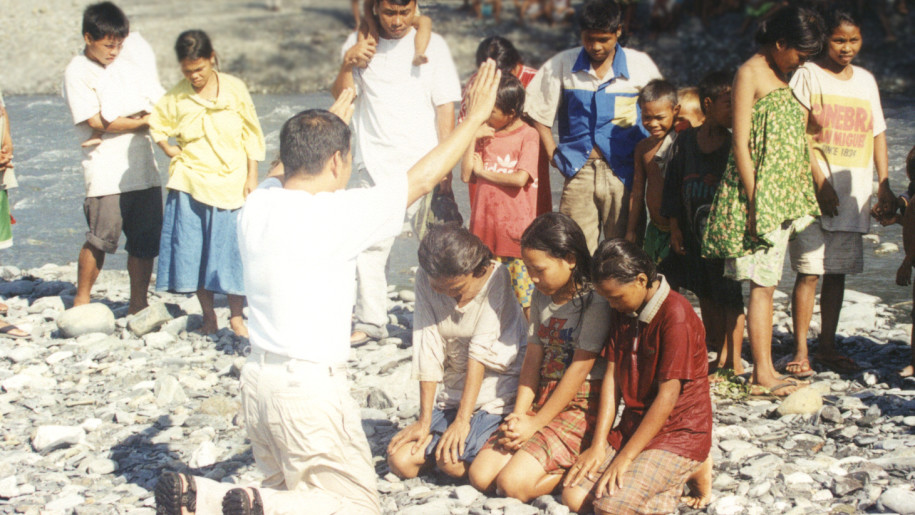 The Alangan project was incorporated into the South-Pacific Division of Seventh-day Adventists in July 2001. Five churches were planted.

Ministering to the Alangan people since February 1989.

The Alangan ethnolinguistic group is one of the cultural and language communities collectively referred to as the Mangyan, along with the Iraya, the Tadyawan, the Batangan, the Buhid, the Hanunoo, the Ratagnon and the Tawbuid. The traditional territory of the Alangan is located in the inner highlands of the island of Mindoro in the municipalities of Naujan, Baco, San Teodoro, and Victoria in Oriental Mindoro, and in the municipality of Sablayan in Occidental Mindoro. Mindoro's lowlands are mainly populated by non-Mangyan groups, including members of the Tagalog, Visayan and Ilocano peoples. Relations between the highlander Alangan and the lowlanders have improved in recent years; however, in the past much prejudice has existed toward the Alangan, even to the point where some believed that these people had tails.

There are different theories with regard to the origin of the name Alangan. One possible meaning is 'group of people with an unrefined culture' (based on the Tagalog term alangan, which means 'precariousness', 'uncertainty' or 'inadequate'). The more likely origin is the name of a river and some mountain slopes in the upper Alangan Valley.

The women traditionally wear a skirt called lingeb. This is made of long strips of woven nito (forest vines), and is wound around the abdomen. This is worn together with the g-string called abayen. The upper covering is called ulango, made from the leaf of the wild buri palm. Sometimes a red kerchief called limbutong is worn over the ulango. The men wear g-strings with fringes in front. Today, western attire is common, with men wearing pants or shorts and sometimes a shirt, while the women wear skirts and blouses.

With the exception of Batangan and Buhid, the languages that make up the Mangyan group are not particularly alike. The territory in which Alangan is spoken borders with territories corresponding to Iraya, Tagalog, Tadyawan and Batangan.

The forest has provided the Alangan with all they need. Rattan and bamboo are used to twine useful plates, baskets, and carrying sacks. Traditionally they also make clothing from the bark and plants they find in the forest. Hunting for boar and forest birds provides meat. Several rivers with chilly, crystal-clear water run through the lush jungle.

Alangan harvest wild rice, but they eat a variety of indigenous and locally introduced plants, as well as hunting for wild game. They practice swidden or slash-and-burn farming, and grow sweet potatoes, manioc, beans and a series of fruits in rotation on their shifting-cultivation farms. The Alangan Mangyans practice swidden farming, which consists of eleven stages. Two of them are the firebreak-making (agait) and the fallowing (agpagamas). A firebreak is made so the fire will not go beyond the swidden site where the vegetation is thoroughly dry and ready for burning. Two years after clearing, cultivation of the swidden is normally ceased and the site is allowed to revert back to forest.

Betel nut chewing is also noted among the Alangan, like all other Mangyan tribes. This they chew with great fervor from morning to night, saying that they don't feel hunger as long as they chew betel nut. Nonetheless, betel chewing has a social dimension. Exchange of betel chew ingredients signifies social acceptance.

The Alangan are struggling to keep their ancestral lands, and more than once they have retreated further into the mountains. Drilling and mining is big business for foreign companies, who practice strip mining to collect nickel and other minerals. It is difficult for the indigenous Alangan to fight large international companies. (See the video: The last stand of the Alangan.)

The indigenous forest population on Mindoro is animist. For them nature is animated by spirits and must be treated with holy respect. The rivers are protected by the god Alulaba. The forest and its diversity of plants are watched over by Kapwambulod. The people consider themselves a part of the diversity of nature. They believe that disturbing the natural condition of the forest can have serious consequences.

After centuries of suppression and exploitation, the inaccessible mountains in the interior of Mindoro became a las bulwark for the indigenous forest population. In recent times their jungle areas have become constantly smaller after devastating logging and pressure from new residents who need agricultural land on the island.

The Alangan project was launched in February of 1989 on the island of Mindoro, Philippines. Lead church-planting missionaries Tim and Dawn Holbrook took the Gospel to this remote tribe and built up a thriving church with local leaders taking over the duties of leadership and evangelism.

By the time the project was handed over to the South Pacific Division of the Seventh-day Adventist Church in 2001, the missionaries had established churches in the villages of Baybusan, Pakpak, Buwao, Mayba and Pandurukanfive churches in all. They also launched a school in Mayba and a clinic, and the indigenous Alangan have held their own evangelistic series, though most of the membership growth takes place from friendship evangelism and small group studies. Each year the new believers meet for camp meeting to encourage and strengthen the fledgling churches in this area.

Today, under the leadership of indigenous lay workers, the church continues to expand. In 2011, the Alangan church reported 11 congregations and 650 members.

Incorporated into SDA church in 2001


At least 2 of the 8 churches were formed by the fusion of multiple companies/groups.

13 ordained elders preach and teach and give Bible studies, and another 6 are in training.