A big, new store opened in our town, and, needing a new toilet seat, I thought this would be the perfect occasion to acquaint myself with this hypermarket. 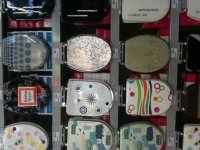 Up until a few years ago, all hardware in our city of millions was bought in small corner shops. There are still hundreds of these shops, and they are a good bet for buying little things like masking tape and hacksaw blades. I like them because they remind me of what the general mercantile stores of the Old West might have been like. Wires, tubes and hoses hang from the ceiling; bags of chicken feed sit in the corner; a few porcelain sinks perch atop bags of cement; rolls of fencing stand against the wall intermingled with shovels and rakes. On another wall are big bunches of dried peppers, dried eggplant, and a bunch of sheep bells on a hook. All around are buckets of nails and screws and plumbing odds and ends including, yes, a modern plastic toilet seatlikely not an item found in Old-West general stores.

In fact, toilet seats werent too popular in Turkey up until the latter part of the 20th century, primarily because there weren't toilets to put them on. What they did have and still use in most older public buildings are squat pots. These porcelain drains are nicely equipped with non-slip footpads on each side, a grim reminder that at some time, somewhere, someone lost their footing.

In the 1960s, a shipping container full of toilet seats landed in a port here. The men who unloaded them had never seen such a thing. They asked their foreman what the strange items were. The foreman held one up, scrutinizing it, and shrugged. Horse collars. Then, looking curiously at the swinging lid, he added, With hats.

Fortunately, Western toilets are coming into vogue in a big way. Or, rather, they are making a comeback. Thousands of years ago, the ancient Romans who inhabited these lands loved to sit on toilets. In fact, toilets were so popular that they put them in long rows like park benches. (Thankfully, park benches with toilet facilities arent trendy now.) The most famous of these toilet benches, which tourists visit with great delight, is in Ephesus. Far more eloquently than the sculptured columns nearby, those simple stone seats with holes communicate to tourists of every language a universality of humanity that transcends time.

Oh yes, I was telling you about the big new store in our city. I could not believe my eyesa massive wall of toilet seat options from $6 all the way up to $150. And to imagine that every one of them had a designer; grown men whose profession it was to shape new concepts of toilet seats. Amazing!

We moved to Turkey to communicate hope about the risen, living, returning Jesus. Before I learned the language, it seemed obvious to me that we would attempt to address a Muslim Turkish worldview. Sure, everybody has their own personality, but all in all, I surmised, they would think like Muslimswhatever that means.

However, I found Turks far from homogenous. The categories are so extreme that it is hard to fathom where their deepest yearnings might meet. The group of people I visit with each day range in ideology from liberal secular materialists to conservative Mecca-visiting religionists. I daily meet staunch nationalists and occasionally Kurdish separatists. Some practically worship Turkeys founder, Ataturk Kemal, and others quietly despise his legacy (but dare not say so publically lest they be slapped with a year of imprisonment for denigrating Turkishness.) I have friends who are educated, assertive communists and others who are soft toward Christianity and see their country in need of more religious diversity.

Overlaying those categories are huge ranges of wealth and poverty that further stratify the society. Turkeys East and West are as different as Harlem and Hollywood. Education and land ownership make for class distinction that divides again. The diversity multiplies further when considering people of strong religious belief. Among Muslims there are dozens of denominations with very dissimilar practices and beliefs.

All this is to say that the people we want to introduce to Jesus arent all the same. This presents a huge challenge when we consider how to create evangelistic materials that grab and hold their attention. Even more challenging is how to have conversations with people that grab and hold their attention while walking a line of truth that honors them, gives polite notice to their cherished ideologies and points them in a new direction.

As I ponder that wall of toilet seatsoblong, oval, sparkly, padded, bedecked with seashellsI see each representing a unique challenge to reaching the diversity of Turkish minds. But point number two is encouraging: at some level, people are all the same. In other words, you cant really choose a useless toilet seat. Any type will work.

As I look at the huge diversity in Turkey, I can become overwhelmed with questions. Is our strategy the right one? Are we speaking to the right target audience? Will my words really communicate to their worldview? How do I overcome false Muslim teachings without offending? Et cetera. But then I remember that, really, all people have the same basic needs. We want to be loved. We want to live without fear. We want to know with sincerity that we matter, and that what we do matters. Above all, what all people need is to be in harmony with their Creator.

Jesus evangelistic approach is a fascinating study. Peoples diverse backgrounds mattered very little to Him. Somehow, He was able to work with contrasting ideologies such as Jewish zealots and Roman centurions, contrasting economies such as lepers and homemakers, and people of diverse moral values like prostitutes and scribes, all using the same basic verbiage. Jesus talked a lot about judgment, a lot about the kingdom of heaven, and quite a bit about His relation to the Father, which were deep needs most people didnt know they had until they heard Him speak. Jesus riveted their attention because He didnt see class, education or political persuasion. Instead, He saw people who were headed toward judgment, who were invited to enter the kingdom of heaven, and who were in desperate need of a relationship with His Father.

Ellen White says in chapter 23 of The Desire of Ages, The burden of Christs preaching was, The time is fulfilled and the kingdom of God is at hand; repent ye, and believe the gospel.

Repentance is a message that is rarely preached strongly today. But from the lips of Jonah, John the Baptist and Jesus, it was a message that sliced cleanly through the strata of society, cutting to the core need of every human irrespective of hat size. From King Herod to the common thief, the message hit home. Oddly though, in all the missionary training books I have read and all the seminars I have sat through, I have yet to read a chapter or hear a lecture on repentance! There is much regarding contextualization and cultural sensitivity, but nothing about calling people to account.

The call to repentance is confrontational but at the same time healing. It is why the word of God is a double-edged sword. Every magnet has power to both draw and repel. When Jesus (and Peter and Paul and Jonathan Edwards and Dwight Moody and George Whitfield and Billy Graham) preached repentance, people flocked to hear, because at some deep level they knew it wasnt philosophical or political rhetoric, it was reality, and it was what they needed.

The maze of secular and religious ideas is a smokescreen to confuse us missionaries and keep us from remembering that all people really are the same. Please pray for us that we will have the power to focus and tell people that the kingdom of God is at hand.

By the way, I bought a $9 toilet seat. And do you know what? It works.