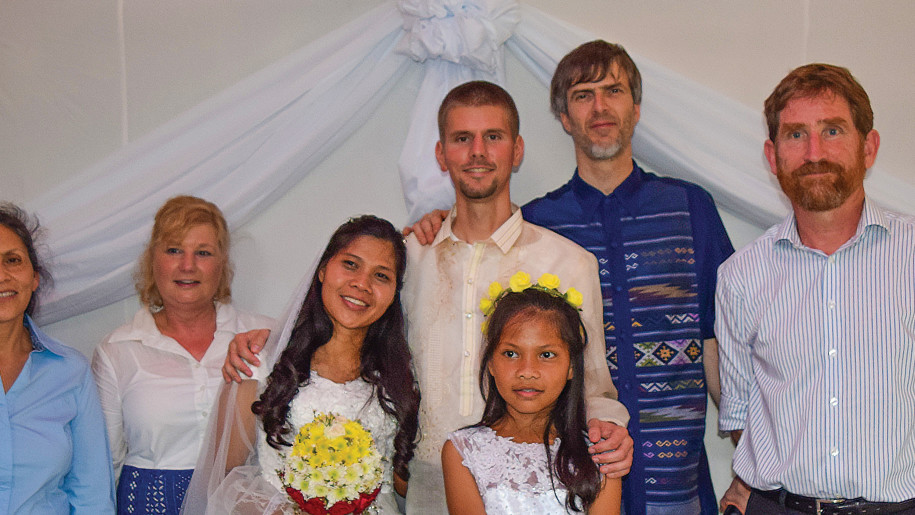 “Have you ever seen such a wedding?” Rosie exclaimed, flinging herself in joyful exhaustion into a hammock. “And after so many years of waiting, too. I knew that John and Rodelyn had grown up together here in Pandarukan back when his family were missionaries. But I didn’t realize how many years they had been interested in each other.”

“It’s a wedding that the whole Alangan tribe won’t easily forget, let alone the Tawbuid,” Jula agreed. I’ve never seen anything like it. I didn’t think anything could faze old Ramon, but he actually had tears in his eyes.”

“I know!” bubbled Rosie. “At first I was worried that the wedding wouldn’t be any fun when the couple announced they weren’t going to have an all-night dance like the lowlanders have taught us to do. I agree that too much bad stuff happens in the shadows around those dances. But then Rodelyn told me that they weren’t going to get the two families together and consult the spirits either, like we traditionally do. I couldn’t imagine what else they could do at a wedding.”
“The game night in the huge tent was so much more fun than a stuffy dance, though!” Jula interrupted with a laugh. “Everyone got to play, from the kids who didn’t know what a wedding is, all the way up to the grandmas and grandpas. Those grandparents were the most fun. They were so uncoordinated! Those were probably the first games they had ever played, and they had the time of their lives!”

“Yeah,” agreed Rosie. And my favorite were the games that John’s friends from AFM led! I’m so glad that Dale, Leticia and Laurence were able to stop by! That piñata that Dale and Leticia made out of an old cardboard box was a blast. It got the kids yelling so loudly that I had to cover my ears!”

“Enough of that, though. What did you think of the actual wedding the next morning? I was shocked to see the entire wedding party show up at the church without any shoes!”

“I actually thought that part was pretty cool, Rosie. John and Rodelyn didn’t use our old spiritualistic ways of getting married. But they wanted to honor our traditions as much as possible. They also planned to establish some new traditions to replace the old demonic ones that we chose to stop doing. John and Rodelyn gave us an example of how we can have an Adventist Alangan wedding! My favorite part was where the bride and groom sat down, and all the elders gave them advice.”

“Oh, Jula! I was so sad that John’s dad couldn’t come. Ramon read the letter that he sent, and it was so good to hear his wisdom coming from the page. But I so wish that we could have seen him again in person.

“I’m glad that John’s mom was able to come, though! She was so happy! She was crying and laughing and jumping up and down. She even remembered how to speak our language after all these years.”

“Wasn’t the couple’s adopted daughter, Ellen Joy, beautiful? She and her friend carpeted the church with bougainvillea flowers!”

“The neatest part about that was that they included Ellen Joy in the wedding. She stood there while her new parents said their vows, and then the pastor introduced her right along with the new couple. Even though Rodelyn and John have practically raised her, it’s still a great way to start her new life in her new family!”

“Don’t forget the reception,” Rosie reminded her friend, involuntarily licking her lips. “I don’t think I’ve ever seen so many people pushing and laughing and tumbling around when the food was served. My dad says there were about a thousand people from all over the Philippines who came to the wedding. And even though they didn’t slaughter a cow like the lowlanders do, the food was still delicious. There was so much that I think each village took some home.”

The two friends were quiet for a moment, savoring the memories. Then Jula started giggling uncontrollably. “You know, at the reception Rodelyn told me that in the morning, when they were all preparing for the wedding, John got locked in the bathroom. The doorknob broke, and the groomsmen had to pick the lock or he wouldn’t have been able to attend his own wedding! Then, a few minutes later, Rodelyn went to the bathroom and forgot the warning not to close the door. She got locked in, too! Dale had to saw off the doorknob to get her out. She thought for sure that she would miss the start of the wedding. But to top it off, while Dale went to get a tool to ensure that the door wouldn’t get stuck again, Ellen Joy darted into the bathroom and closed the door. She thought the door was fixed. But this time it stuck so hard that Dale had to cut a hole in the door to get her out! Within a matter of minutes, the whole family got locked into the bathroom, one after the other!”

“That’s a memory that will make them chuckle for the rest of their lives!” Rosie smiled.

“I’ve never seen a wedding like it, Rosie,” Jula concluded with a contented sigh. “I hope when I get married someday that I can have one just like it!”

“Me too! And hopefully sooner rather than later!”

first of all: i LOVE your reply to that coward comment. love. all answered, no doubts left. your new chapter is going to be a wonderful life with your husband. i’m sure of that!
also, you look absolutely amazing. i love the hair wavy and you’re just glowing.
congratulations and i’m glad it was such a beautiful day/week! xoxo
Alb*****n girls

I want to say thanks for beautiful blog sharing with us. Your blog really great resource to update my knowledge. CBD oil for pain