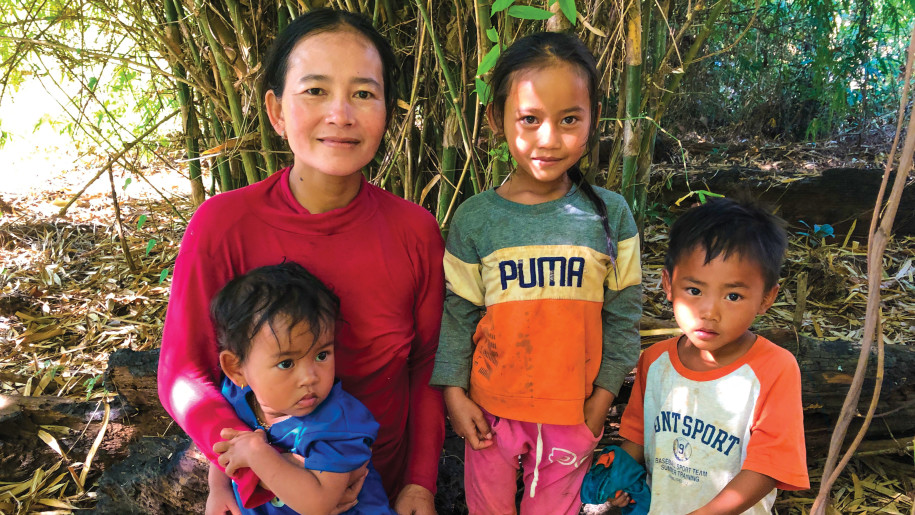 Trembling, little Jendra huddled behind a stack of rice sacks. She was sure the men with machetes would hear the hammering of her heart. “No one is left,” she finally heard a man say as they climbed down the rickety steps of her house.
Daring to peek through a crack in the wall, Jendra almost fainted from the sight. Her family lay lifeless on the road in front of her house. In that moment, Jendra’s world crumbled around her. And, as if seeing her family murdered wasn’t enough, she would forever be labeled a jyak—a sorceress.

Now an orphan at a young age, Jendra went to stay with various relatives who dared to look after her. She worked hard to earn the little food that her relatives could spare. But despite her efforts, she was not allowed to stay in one location for long. Fearing the outrage of the community for helping a jyak, Jendra’s relatives would soon send her on her way. Rage grew in Jendra’s heart at the cruelty and unfairness of life.

It had all started when her family had failed the jyak test. And everyone knows what a community must sometimes do to protect itself from jyaks. Since Jendra was the child of jyaks, she was automatically labeled a jyak. She shuddered at the very thought! As if she would want to stay up all night flying around the village looking for souls to eat!

Stories of jyaks loomed ever bigger in Jendra’s mind. I don’t feel like an evil sorcerer, Jendra would tell herself. In Pnong belief, a jyak is a sorcerer and has a different kind of soul than a regular human being. Because their soul is different, they can never change, even if they become a Christian. A regular person has a buffalo soul, but a jyak has a cow soul. The jyak looks like a regular villager by day, but at night, their soul leaves their body and goes hunting for buffalo souls to eat. When someone in the village grows sick for no apparent reason and quickly dies, everyone knows a jyak has eaten their soul. Everyone fears jyaks, and they use various means to protect themselves. If the villagers have performed the jyak test, and they know who the jyaks are, often they tolerate them. After all, they don’t want to anger them or they might come and eat their souls. So, generally, people give jyaks whatever they ask for and try to stay on their good side. If a jyak eats only two or three souls in a village, people will put up with them. But when they eat too many, the villagers will try to make a deal with them, capture them and sell them as slaves, or kill them.

Jendra knew it was only a matter of time before more people in her community died, and then she would be accused. So, as a young teenager, she traveled to a faraway village and married as a means to survive. In the course of Jendra’s first marriage, laws were enacted that forbade the killing of jyaks. But that didn’t stop the stigma and hatred. People still kept close track of who the jyaks were and tried not to anger them. With laws protecting jyaks, the Pnong people became more fearful that jyaks would multiply and eat more and more souls.

Though Jendra had gone far from her village of birth, she couldn’t escape the jyak label. When some people from her previous home village moved in nearby, word quickly spread that Jendra was a jyak.

In the meantime, Jendra had met some Christian missionaries and had learned much about Jesus. These missionaries helped her family build a house and paid to have her son sent to our school. Jendra wanted to become a Christian, but she seemed stuck in a web of unfortunate circumstances. Hot rage still burned inside of her, and she would often lose control, chasing her husband with a knife or abusing her kids. Her husband was abusive to her as well. After two marriages that ended in divorce, she was angry at the world. Though the villagers put up with her, as any Pnong would try to put up with a jyak, no one liked her. Now a single mom with a baby, a three-year-old and a five-year-old, Jendra struggled to provide for her children. Since no one would look after the kids, she would leave her five-year-old daughter at home to take care of the younger ones. Little Sari would cook, wash clothes and do all the necessary chores, rocking her fussy baby sister to sleep. I went to check on them often, bringing them food, helping to dress infected wounds, and just playing with them.

On Sabbaths when Jendra wasn’t out working in her jungle gardens, she would come to our house church. Often she would express her faith in God and her desire to follow Him. She would share stories of when she was in desperate need and He answered her prayers. Jendra attended our most recent baptism in which a Pnong couple sealed their decision to follow Jesus. She told me afterward that she wanted to be baptized! So I began studying with her every week. Unfortunately, our studies were cut short by COVID-19 stay-at-home orders. I prayed for Jendra that God would preserve her desire to follow Him.

God’s ways are much better than our own, and I need not have worried. Our friend Noy, whom we hired to work with us as we train him in spiritual leadership for the Pnong, began to study with Jendra and three others, preparing them for baptism! As a Pnong, Noy is much more capable of meeting the needs and addressing the issues that these dear friends have. Noy has his own testimony of Jesus’ power that freed him from an evil temper. We are praying that Jendra will find this same, miraculous freedom. Noy’s wife, Ma Ceort, was just telling me that Jendra recently made a commitment to keep the Sabbath, something she had never felt she could do before since she was barely eking out her family’s existence.

We are so encouraged as we see what God is doing among the Pnong! No mountain of difficulty can stand in His way! No evil can withstand the mighty power of Jesus! No life, no matter how enslaved, is too lost for our mighty, conquering God! Please pray for our little groups and those studying for baptism. Pray for the local leadership who are in the process of being trained. And pray that Jendra will find the joy and freedom of full surrender to Christ.