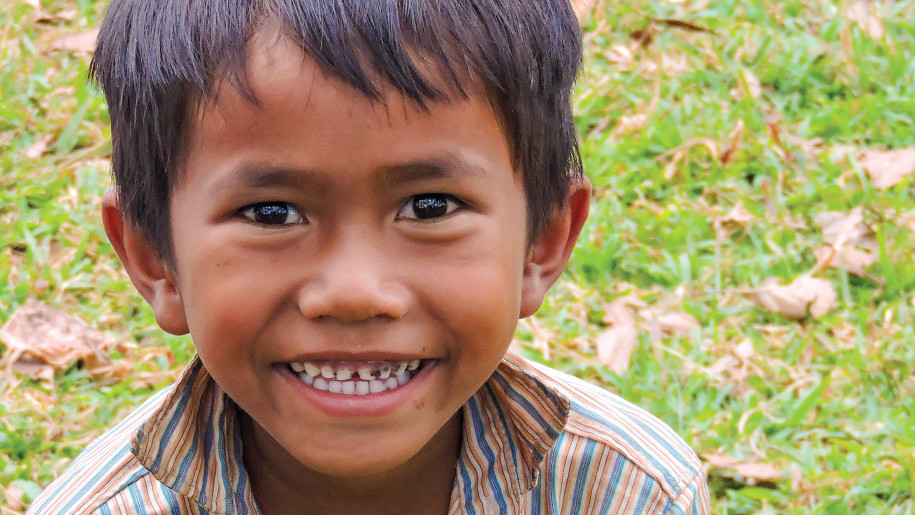 One of the staff members from the village had just come in during morning worship and given us the news.

Chan was one of my students. One of my brightest students (and not just in intellect). He brought such a cheery smile to class every day. Where would that smile be now? Poor kid. He’s only in the first grade. I wished I knew how to be there for him and his family now.

What could I possibly offer them though? I don’t know the language. I don’t have the words to comfort them.

Expressing my desire to help in a culturally sensitive way, I asked one of the Khmer teachers if there was anything I could do. Knowing that one of the most expensive things to do in Cambodia is to die, he suggested that I bring money to help pay for the services.

Okay. I can do that. Even if that’s all I can do. God can use that right?

Next, all the staff agreed that after school we should go visit the family in mourning to offer our love and support. The day seemed to fly by as we anxiously waited for the time to leave; and when that time came the rain began to pour and we knew that this would not be an easy visit. As we left, many of us were still unsure of what to expect. All we could do was pray.

God, please use us today. Amen.

Once in the village, one of the staff members who lives there warned us that, if we ventured onto the property of the deceased, we could not step foot on any other property in the village for seven days lest we curse the land. We would’ve gladly proceeded to visit the family, except we had a Bible study in the village the following Sabbath. Could we afford to give up a blossoming study with consistent interests for a sorrowful and unpredictable visit? According to the host of the Bible study it was more than okay; the study would continue.

No evil shall befall you, nor shall any plague come near your dwelling.

Praising God for the host’s faithfulness, we moved forward, but as we did, we heard the grievous wailing of a woman coming from behind the first building. At first, a relative of the deceased came from around the corner with a young expressionless boy (one of my first-grade students, Davit) hanging on to her back, but the unseen wailing continued.

Then, appearing from behind the building with trembling hands clasped together and shaking in front of her chin, the wailing woman, mother of the deceased.

He heals the brokenhearted and binds up their wounds.

Just then, our school principal promptly embraced the despondent soul to comfort her. The wailing woman, appearing to have gathered strength enough to do so, turned to leave and motioned us to follow her.

Embrace a grieving soul. God give me the courage.

Upon reaching her house we saw a group of men gathered under a tarp working on a square-shaped structure and discussing something amongst themselves in a seemingly insensitive way. Bewildered by their behavior, I stood for a moment under a rough metal structure (tall enough for only a Cambodian to be comfortable) as the Khmer teachers talked with the villagers by the doorway of the house. After asking one of the teachers next to me what they were talking about, he said the body was inside but that it was okay for us to go in.

Then it hit me. Turning again to look at the box, it’s purpose became clear. They were building a coffin.

Seeing the staff move forward, I began to remove my shoes to enter the house too, when all of the sudden I heard a playful voice call, “Teacher.” I turned to see Chan giddily swinging around on the frame of the rain shelter; another unexpected behavior, especially for a boy who had just lost his brother. Not knowing how to respond amidst the many other downcast faces, I simply smiled sympathetically and made my way inside.

As I made my way into the small wooden structure I saw clusters of people huddled together against all walls and corners in various postures of mourning. Some were rocking back and forth in despair, others were weeping heavily in the arms of a loved one, and some sat still, staring ahead almost vacantly. In the middle of the room, the body lay, covered in a blanket and surrounded by Buddhist imagery, offerings, and incense.

He will wipe every tear from their eyes. Lord come soon.

I stood now with the rest of the teachers, listening to the mother tell us through tones of anguish how her son had died. At one point she gently pulled the blanket back to reveal the scarred but clean and mended face of her son smiling lifelessly upward.

Suddenly I felt two little arms wrap around my legs. Looking down I saw Davit, the expressionless boy I had seen when first arriving. Realizing he was a dear friend and relative of Chan, I couldn’t imagine the grief he must’ve been feeling. His face was once illuminated by a simple smile just like Chan’s, but was now sapped by loss. I wrapped my arm around him to comfort him the only way I knew how and we stood silently as they laid the sheet back over the body.

We shall not all sleep, but we shall all be changed.

The flickering candles and rising incense made the atmosphere heavy with sorrow, and the dreary rainfall drowned out any glimmer of hope. Then, gently reaching our ears, the sweet melody of Amazing Grace began to permeate the darkness. I looked over to see the principal humming that promising tune as she comforted a young girl weeping softly in her bundle of blankets.

God, may they remember this tune as you draw near.

When the appropriate time came we offered the mother our gifts and asked to pray with her. I didn’t know what Buddhists believed about prayer, but I could see she greatly appreciated it.

We reverently made our way out as a voice began to ring out from the loudspeaker outside their house in an annoyingly insensible and seemingly unsuitable way. Fortunately the rain was beginning to let off as we wandered back to the car, but little did we know the real light that had shown that day until some time later.

It turns out that the family of the deceased had received no support from the village, and our school was the only people to show up. The mother was deeply moved that we had reached out to her, and something (or Someone) deep within told her she must become a Christian.

Two weeks later, she attended the village Bible study with a beaming smile and greater interest than anyone we’ve ever had. She was overjoyed to receive a recording of the whole Bible in Khmer to listen to as well and has been studying the Bible with us every Sabbath since.

The day of the funeral was a tumult of emotions and everyone seemed to be handling it in different ways. But throughout all the ambivalence and gloom, God heard my prayers, and His love proved steadfast.