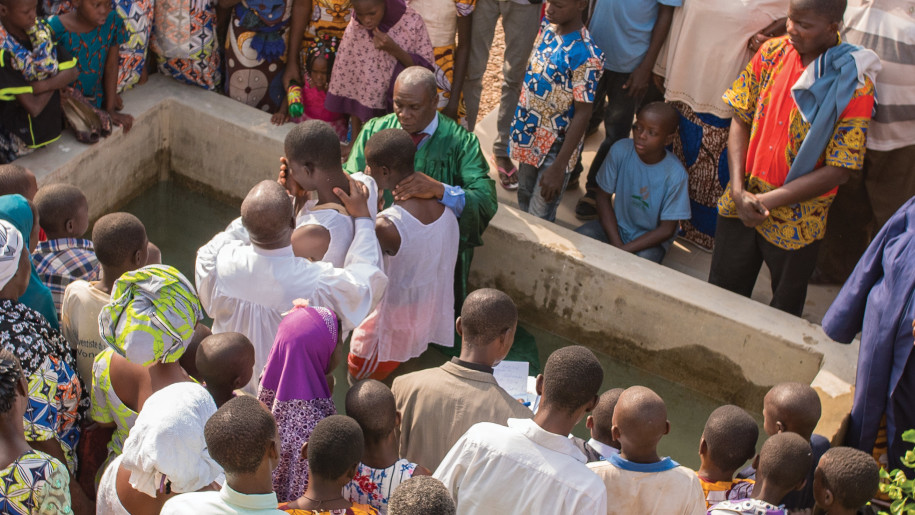 In 2005 I visited Timbuktu. Yes, it is a real place in Mali; and yes, it is in the middle of nowhere! We were preparing to minister to the Hassanya Moors of Northern Mali with placement in Timbuktu. But after many months of prayer, research and fundraising for that project, God showed clearly that He did not want us there. The local Adventist mission expressed concern that Timbuktu was too far afield to support once a church was established there. In 2012 we understood more of why God closed the door to Timbuktu (see our article in the October 2012 AF). Timbuktu was overrun by the Tuareg rebellion in northern Mali in 2012. Some Christians in Timbuktu were taken hostage.

Yes, God in His omniscience foresaw the future of Timbuktu and made Romans 8:28 come to pass for our family. He also prepared us for this transition. In February 2005, I was on a bus traveling through northern Benin on my way back to Burkina Faso from a meeting in Lomé, Togo. During that 19-hour trip I had a dream. I dreamed that I was ministering to people in the territory I was passing through. Elmire also had a dream confirming mine (see the October 2006 AF). Little did we know that God was giving us a glimpse into the future of our work in northern Benin, which we would begin less than two years later.

With the above background, our introductory article in 2006 began with the following question: “Do you believe in miracles? Have you personally experienced them?” We believe the answer is “yes” for most Christians. Among frontline missionaries to the unreached, the “yes” answers must be 100 percent. In the case of our family, we believe in miracles 200 percent! For the 10 years of our ministry to the Dendi people in northern Benin, we lived from miracle to miracle. There were so many times when we could not see the way forward, but our God is the Lord of the impossible.

On Christmas Eve, 2006, we arrived in Kandi, Benin as the first Seventh-day Adventist missionaries to the unreached Dendi people. We had no idea how challenging our work would be. The religious background of the Dendi—voodoo and folk Islam—exposed us to all kinds of trials that only could be solved by divine miracles.

Prayer has been the cornerstone of our ministry with many coming to faith as a result of miraculous healing and deliverance from demons. Our practice of praying seven times a day began as a strategy to respond to our Muslim brothers who looked down on Christians because they thought we do not pray enough. Since Muslims value prayer and pray five times a day, we decided to make prayer the very center of our work. We set seven different clock alarms, and when they chimed throughout the day, we would stop whatever we were doing to pray. Looking back, we now see that our commitment to prayer was a turning point in our ministry. God began to move powerfully.

Almost every quarter of our first year brought a host of new challenges. We wrote in February 2008 that “most missionaries will confess that their work has profoundly changed them. They will also humbly admit that the load, at times, seems oppressive, and the stress of church planting sometimes brings them near the breaking point.” We experienced culture shock, a new diet, many health hazards, risks to the children, challenging living conditions, isolation, spiritual starvation, distance from relatives and close friends, prejudice, criticism, attacks and hardships of all kinds. The enemy uses all these avenues to discourage missionaries and deplete the mission workforce.

Just 10 days after we arrived in Kandi, our daughter Eliora, who was 16 months old at the time, was mysteriously scalded. An invisible force pushed her leg into a pot of boiling water just removed from the fire. A few weeks later, we were accosted by bandits who shot our vehicle, physically abused our friend and took our camera, which had many pictures of our work. Rumors spread around the town about a plan to attack us, and tokens of witchcraft appeared around our house. This onslaught of trouble threatened to break us down and make us abandon our project. But for each trial or attack, God provided a miracle that assured us of His protection and continued calling. Two months after the bandits took our camera, we miraculously got it back with all pictures intact. By the grace of God, we did not leave Kandi but instead redoubled our efforts.

For two years we made friends, learned the local language and completed a study of Dendi culture and beliefs. In June 2009, Elmire opened a cyber café offering word-processing services. It drew customers from as far as three hours away and soon became a great tool for outreach. Even radical Muslim religious leaders became her customers and eventually our friends.

In January 2010 we started Bible studies with a group of 10 people. In July 2011 we began building the Faith Dialogue Center, a place where Christians and Muslims could meet and talk about spiritual things. That same year we rejoiced over our first four baptisms. By June of the following year, six more people from Kandi were baptized, and five from Sonsoro, a neighboring village where a satellite group was meeting with the help of a dedicated Dendi lay worker.

February 2013 saw 12 more baptisms, and the Kandi church company was recognized by the Benin Seventh-day Adventist Mission. A year and a half later (November 2014), the company in Kandi was officially organized into a church with 68 members. In December 2014, work began in the village of Wonga where seven were baptized. Meanwhile in Kandi, construction began on the new church building to serve as a place of worship when the three groups came together for meetings. The Faith Dialogue center, which seated 46 people, was already too small.

2016 saw continued growth on the Dendi Project with satellite work beginning in Malanville on the Niger border. They had their first five baptisms last December and six more in March of this year. In May 2016, construction began on a building with three housing units for Bible workers in Kandi.

By the grace of God, when we look back we are amazed at how He led our work among the Dendi people over our 10 years in Kandi. On December 17, 2016, we handed over the completed Dendi Project to local Adventist Church leadership. Over the last three years, tithes and offerings from our members have been rising steadily. The project has two students in West African seminaries studying to become pastors. Today, in that previously resistant area of the Alibori department of Northeast Benin, God has grown the Dendi Project from its humble beginnings into an established Seventh-day Adventist presence among the Dendi people with a vibrant congregation of 75 members in Kandi and three satellite groups in the villages of Sonsoro (50), Wonga (35) and Malanville (12)—a total of 172 regular worshipers with 110 baptized members. We are so thankful for how God has blessed the Dendi Project!

We were constantly amazed by the power of God working through us to transform suffering souls into joyful servants of the Most High, and we look forward to continued growth as the work transitions to the Benin Seventh-day Adventist Mission.

Thank you for your faithful prayers and support. Please stick around as we introduce you to our new mission project in the Maghreb. Through faith, we know that God has more blessings and miracles in store!