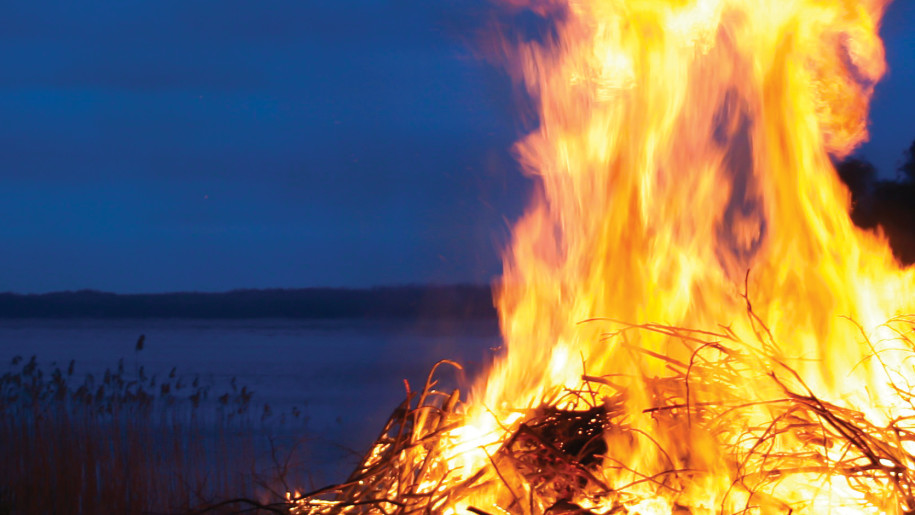 Crash! Fragments fly through the air as one clay pot after another hits the ground, the sound shattering the stillness of the late morning. Flames lick the edges of peculiar looking pieces of bamboo torn moments earlier from places of honor overlooking darkened rooms. Strings weighted down with small pieces of metal begin to melt as the fire intensifies around them. Curious villagers clasping young children and babies on their hips peer from a safe distances as smoke begins to ascend heavenward.

Small fires are common in these parts. Every day, village women sweep leaves, sticks and other unwanted debris from under their houses into little piles and burn them. But as the villagers peer into this fire, they recognize that the burning pieces are far from ordinary rubbish. Something strange and even frightening is taking place here—something they have never seen before.

A few days earlier, I received a phone call from a Pnong friend, Kaak, requesting prayer for a family member who lay sick in the provincial hospital. “Can you come and pray for her?” she asked. “She wants to follow Jesus but doesn’t know how.”

The following day, as I sat by the young woman’s bed, Kaak looked over at me and said, “Last night her husband decided that he wants to follow Jesus, too.”
“What is your name?” I asked the husband, who was sitting there with us.

“My name is Suty, and my wife’s name is Neary,” the young man replied.

“Do you have a church in your village? Are there any other Christians?” I asked.

“No. We don’t have any churches, and there are no Christians at all in our village. But there are two or three other families who also want to become Christians like us.”

“Teacher,” Kaak added, “they need someone to lead them. They have followed the spirits, and that is all they know. They don’t even know how to pray.”

Could this be the beginning of a miracle? I mused. It sounded almost too good to be true. “What if I come and teach you? Would you like that?” I asked Suty and Neary, barely able to contain my excitement.

Four days later, I was sitting on the floor of a small, one-room wooden Pnong house visiting with these seekers for truth. I felt like I was on sacred ground. Pnong villagers flowed in and out of the small hovel as we visited together. Most, if not all, were extended family members. Rice wine was offered (and declined), rice and hard-boiled eggs were served (and gratefully received). We offered a closing prayer, and laid plans to visit again the following Sabbath.

On Sabbath, Molly, Kaak, several of Kaak’s family members and I made our way to Suty and Neary’s house. Will the family be as receptive as they were several days ago? I wondered to myself as we made our way along the muddy road that wound through fields and banana plantations. To our joy, Suty and Neary and their family were eagerly waiting and welcomed us warmly. As we sat down to talk about God, they shared their excitement about the small MP3 player I had given them the week before and the beautiful stories about God they had been listening to every evening since. As we delved deeper into the subject of God, Lucifer, the angels and the creation of the world, they eagerly talked about the parts of the audio stories that had especially stood out to them.

“So, you see, you don’t have to be afraid of the spirits any longer,” I reassured them. “They are not gods at all but fallen angels that God has cast out of heaven. God is more powerful and has many more angels than Satan does. He will protect us from these evil spirits if we choose to follow Him.”

As these new, liberating thoughts sank deeper into our Pnong friends’ minds, Suty looked over at me. “So, if we want to follow God, we have to follow Him completely, right? We can’t follow both the spirits and Him?”

“That’s right,” I replied. “There are two roads. One is God’s road, and the other is Satan’s road. We can’t be on both roads at the same time.”

Concern showed on Suty’s face. “What should we do about our spirit charms and fetishes then?” he asked.

“If you follow Jesus, you don’t need them anymore,” I replied. “Jesus will send His angels to protect you.”

“What should we do with them then?” he probed.

“We can simply burn them,” I answered. “And we can have a special prayer of dedication for your house and family. Then only God and His angels will be allowed in your home and in your heart.”

As signs of my Pnong friends’ internal struggle played across their faces, I prayed silently, Lord, give me wisdom to know what to say. “Why don’t you think about it this week,” I suggested reassuringly. “And when we come together next week, you can tell us your decision.” Slowly, smiles lit up their faces once again, and we committed them to God in a final prayer.

Afterwards, as we sat and ate a small Sabbath lunch of white rice and eggs together, Neary looked up with a twinkle in her eye. “After you came to visit us a few days ago, I had a dream of a man with hair down to his shoulders,” she confided. “I think it was Jesus.”

As we drove back to our house that afternoon, thoughts whirled through my mind. Would this family make the choice to follow Jesus all the way? Would they choose to pull down their charms and fetishes? Or would their culture, beliefs and family connections be too overwhelming for them? And what about Neary’s dream? Surely they know now that Jesus is real. But will they choose to follow Him?

One week later, the song “I have decided to follow Jesus” ascended heavenward along with smoke from burning charms and amulets. Tears slipped from the corners of Neary’s eyes, and Suty’s hands clasped tightly together as they sealed their decision to turn from the spirits and follow Jesus.

But it’s not enough to “sweep the house clean.” The old needs to be replaced by the new. So, as a group, we turned our attention to the house and anointed the doorposts, lintel and four corner posts with oil and prayer, giving their house and everything in it to God.

“Could you come and also dedicate our two garden houses to God?” Suty asked earnestly at the conclusion of the house dedication.

A short while later as we stood in front of their forest house, I handed Suty the oil. After splashing it on the front pillar of his forest house, he prayed a simple yet earnest prayer of dedication and asked God for protection from the spirits.

Please pray that Suty and Neary will stay strong in Jesus and will have peace and joy in their hearts that will shine through them to their extended family and neighbors. Everyone is watching. Will the spirits be angry and eat Suty and Neary’s souls? Will their crops fail? Will their house burn down or their children fall sick? Everyone is watching because they, too, are hungry for freedom from fear and from slavery to hateful spirits. They, too, would like to follow Jesus. Is He safe? Is He really good and loving? Is He strong enough to protect them?